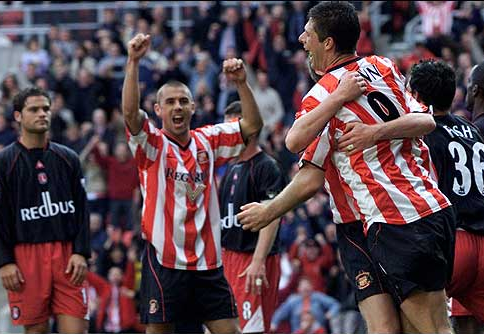 Long before he was chairman and saviour of the club, Niall Quinn was actually an extremely good player for Sunderland AFC.

Following his leaving the club, fans may currently be thinking of all he has done off the field, where he has worked wonders, but his contribution on the pitch will be just as fondly remembered.

He arrived on Wearside, after a decent spell with Manchester City, as a player pushing thirty, regarded as being past his best and, at £1.3m, a potentially expensive (for those days, anyway) flop.

That certainly seemed true, as his first season was marred by injury. He missed around six months of the campaign, only playing in 12 games – scoring two goals – as Sunderland were relegated.

A move to a new stadium, however, would breathe new life into both Sunderland and Niall Quinn, as would the arrival of a new striker to play alongside him – Kevin Phillips.

Quinn was the first player to score at the Stadium of Light, in a 3-1 win over his former club Man City.

Phillips was also on target that day, and between them the pair would score 50 league goals that season as Sunderland finished third.

They ended up in the play-off final against Charlton, and Quinn netted twice at Wembley in what is surely thought of as the greatest play-off final in history, although Sunderland went on to cruelly lose on penalties (cheers, Mickey Gray!).

The following season was even better, as Sunderland picked themselves up, dusted themselves down, and steamrollered everyone and everything in their path on their way to winning the then Division 1 with a then record of 105 points.

Quinn scored 18 goals in that remarkable season, and laid on countless others. However, perhaps the standout memory of him from that season is his spell in goal.

Having put the Black Cats ahead against Bradford, Quinn had to don the gloves when Thomas Sorensen went off injured and there was no reserve ‘keeper on the bench. Quinn kept a clean sheet and Sunderland won 1-0. Strangely, it wasn’t the first time the big Irishman had been between the sticks, having saved a Dean Saunders’ penalty back in 1991 while playing for Man City

Upon Sunderland’s return to the Premier League, question marks hung over whether or not Quinn and Phillips could continue their spectacular partnership at the highest level.

No one should have doubted them, as Phillips went on to score 30 goals, aided and abetted as always by Niall Quinn, who himself chipped in with 14 goals. It would not be doing an injustice to Phillips to say he would not have scored so many were it not for Quinn.

The club went on to have back-to-back 7th place finishes, before narrowly avoiding relegation in the 2001/02 season. It was then, at the start of the 2002/03 campaign, Quinn announced his retirement after over 200 games and 60+ goals for the club, plus more memories than can be listed in a single article.

It’d be rude not to mention a few, though, so: the first goal at the SoL, going in goal against Bradford, a delightful chip against Port Vale, the 4-1 win over Chelsea, his header at St James’ Park in the rain, and donating the proceeds from his testimonial to charity.

However, the love affair between Sunderland and Quinn was far from finished…

One thought on “Niall Quinn at Sunderland: the player”