Today is was reported that Eric Cantona has been lured back to the world of football after a mixed spell as an actor. Cantona has taken up a position as Director of Soccer at the newly reformed New York Cosmos, the team which captured the imagination of sports fans across American in the late seventies and early eighties.

At their peak, the Cosmos attracted crowds of over 76,000 to the Giants Stadium as fans clamoured to see Beckenbauer, Carlos Alberto, Chinaglia, Neeskens and, the star attraction, Pelé.

The appointment of Eric Cantona was the latest move by the Cosmos group, led by former Tottenham Hotspur director Paul Kemsley and Terry Byrne, to attract interest in the Cosmos, once the most glamorous brands in football.

Despite the spectacular heights reached by the Cosmos in their heyday, the club was initially a collection of journeymen assembled from the amateur leagues of New York City. The team was the child of billionaire Steve Ross, head of Warner Communications (the umbrella group owning Warner Brothers, Atlantic Records, Atari and other subsidiaries).

Unsurprisingly, the team failed to draw supporters from  baseball dominated New York. Its smattering of fans came mostly from the ethnic minorities and families of the players.

In an attempt to draw publicity towards the team, goalkeeper Shep Messing, now a pundit for ESPN, posed naked for an adult women’s magazine.

New York was the home of Joe DiMaggio and Joe Namath, huge stars who could draw crowds and media attention from the US media and sports fans. What the Cosmos needed was a hero who could break the apathy towards the game in the United States. They hunted Pelé, the man who rivalled Muhammad Ali as the biggest name in sport at the time. 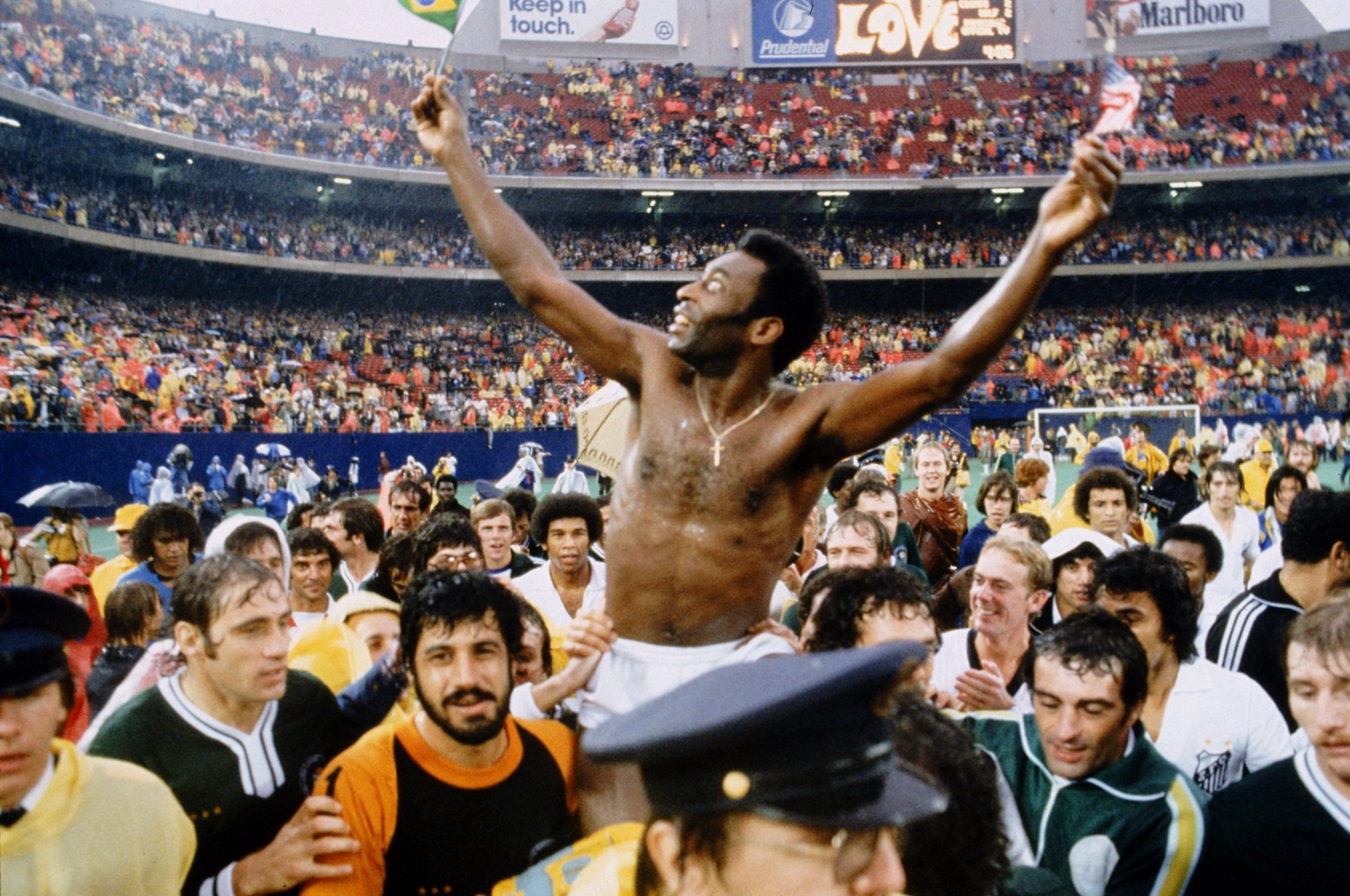 They captured the Brazilian maestro on an unprecedented three year contract worth $4.5 million. By contrast, the highest paid baseball player at the time, Hank Aaron, was earning a $200,000 a year. The financial investment was incredible, Pelé was the highest paid sportsman of all time.

The press conference unveiling the World Cup winner was a swarming crowd of reporters from across the United States. The signature of Pelé marked a changing of attitude in America. Soccer was on a meteoric rise. Pelé joined up with the Cosmos in time for last few games of the 1975 season. His mere presence was enough to draw 20,000 people to Philadelphia, he wasn’t even playing. Pelé tripled the average attendance of North American Soccer League games. His success attracted some of Europe’s biggest names to the league. Gordon Banks, Geoff Hurst, Rodney Marsh, George Best all flocked to America.

For Steve Ross, Pelé alone was not enough. The city of New York has a strange relationship with its sports franchises. The local media and ruthless fans in the Big Apple demand winners. With this in mind, the great Giorgio Chinaglia was captured from Lazio. Chinaglia was brash, arrogant and often unpopular with the fans but he gained the trust of Steve Ross.

“Pelé brought soccer to America but Giorgio put it over the top”, Shep Messing recalled in the documentary Once in a Lifetime, “people came to boo him, yell at him, throw things at him.”

Chinaglia, number 9 for the Cosmos, scored 19 goals in 19 games for the Cosmos while the indomitable Pelé led the league in assists. Despite their importance to the Cosmos as a package, they had a fractious relationship. One memorable exchange saw the usually cool Pelé snap at Chinaglia for shooting from “no f*cking angle”.

“I am Chinaglia. If I shoot from some place, it is because Chinaglia can score from there,” was the reply.

The two personalities nevertheless socialised. They were both prolific womanisers, in one instance both turned up hungover to a playoff match against the aptly named Tampa Bay Rowdies after the Rowdies allegedly hired a limousine and two blonde women for the duo. The failure of the 1976 season was followed by triumphs of 1977. Intent on marketing football for the American public, Ross moved the Cosmos to Giants Stadium, employed Cosmos cheerleaders and even had Bugs Bunny as a mascot.

The effort to secure Pelé one final title before his retirement was a genuine one amongst the players and management of the club. Franz Beckenbauer, to the ire of Chinaglia, was brought in from Bayern Munich as was Pelé’s captain at the 1970 World Cup, Carlos Alberto.

Attendances began to rise steadily as these new stars beat teams week in, week out at Giants Stadium. Steve Ross called in his contacts in the world of entertainment and brought them to matches. The Cosmos became the most glamorous ticket in New York, with kits designed by Ralph Lauren, and raucous parties held every week at the trendy Studio 54 nightclub.

Head coach Gordon Bradley once instructed security at Giants Stadium to remove a gangly, skinny gentleman who “looked like a drug addict” from the dressing room. That man was Mick Jagger.

Coincidentally, away trips with the Cosmos were “like travelling with The Rolling Stones” according to Phil Mushnik, a prominent sports writer at the time. PR executive James Trekker claims to have witnessed “two sex acts” performed on the jet carrying the team to the 1977 Soccer Bowl. Success in that year, Pelé’s last for the club, was followed with further victories in 1978, 1980 and 1982. 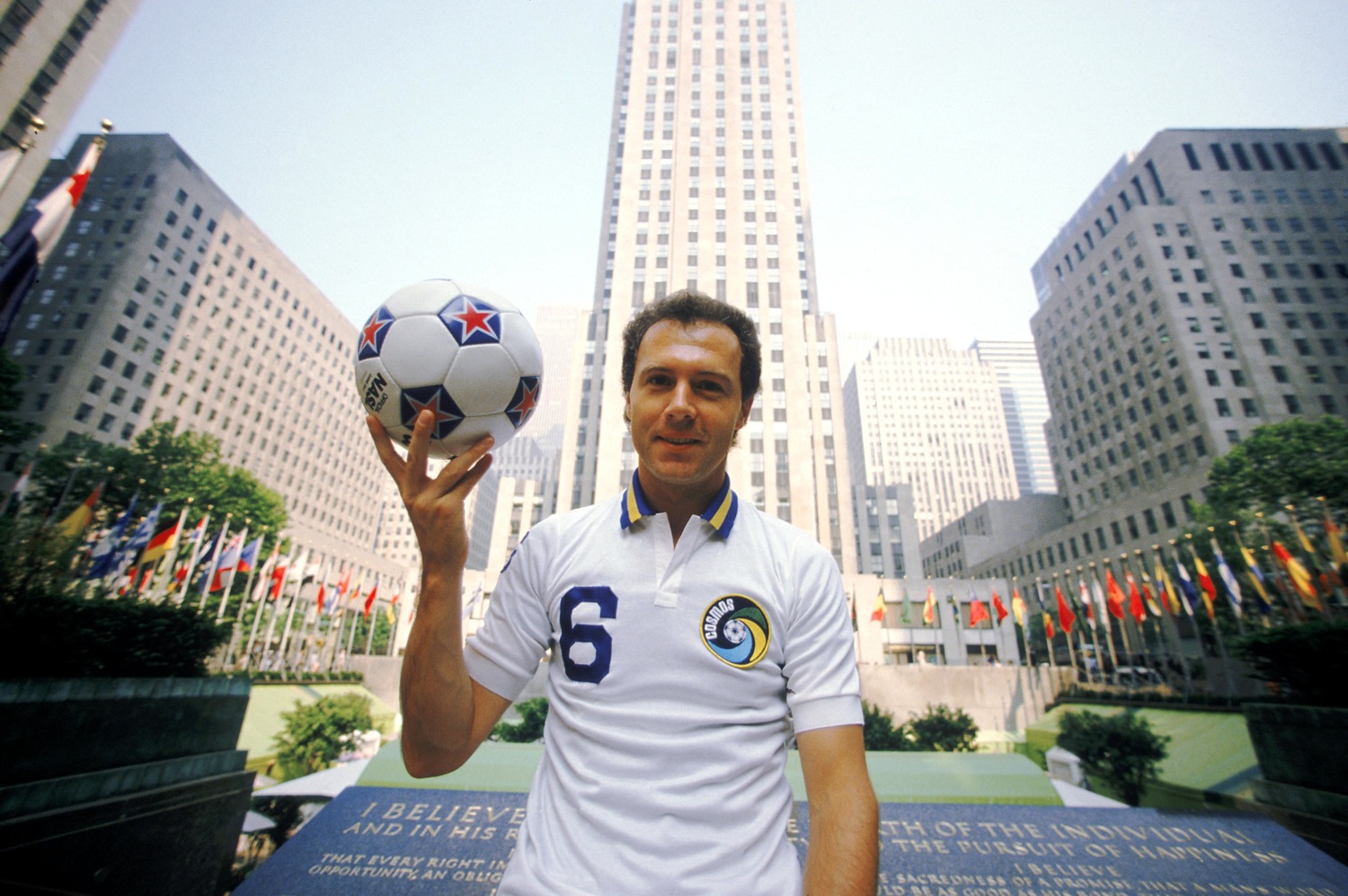 Attendances peaked in 1980, with the team shattering all attendance records. For soccer in the United States to stay successful, however, television backing would be needed. ABC broadcast the 1979 campaign, but it was gravely mishandled. Live fixtures were shown at midday in the middle of summer, while many Americans still hadn’t grasped the rules.

The Cosmos had hoped that the league would initially be broadcast in round-up shows with only the Soccer Bowl broadcast live. ABC’s mistake marked the decline of the NASL, and the Cosmos with it.

The Cosmos closed, but the rights to the club were maintained by Peppe Pinton, a former personal assistant to Giorgio Chinaglia, who had risen to general manager of the club through Chinaglia’s influence. Pinton held the rights to the Cosmos until 2009 when they were sold to Paul Kemsley, former vice-chairman at Tottenham Hotspur, who has since found support from former Liverpool chairman, Rick Parry, and businessman Terry Byrne.

The appointment of Pelé as Honorary President and Giorgio Chinaglia as International Ambassador serve as a link to the past glory of the New York Cosmos, a team which captivated the American sporting world.

A cigar-chomping Eric Cantona proclaims that the Cosmos are back on the group’s official website. The goal of the Cosmos, according to Kemsley, is to establish the club as the MLS’s 20th franchise by 2013. The goal seems attainable, given the aims of the MLS to expand into New York City (the New York Red Bulls are situated in New Jersey) but with no players, stadium or immediate fans to speak of, the dream could yet be some distance from reality.

Despite this, the management of Kemsley and co. and the international allure of Pelé and Cantona can attract investment just as the Cosmos assembled a team of galácticos years before Florentino Pérez began his project at Real Madrid.

The Cosmos won over America once before poor management doomed them to failure. If the story of the new Cosmos is half as compelling as that of the 1970’s vintage, American soccer might flourish once more.