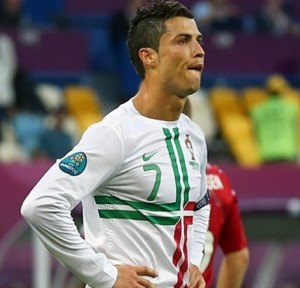 In a dramatic denouement to Wednesday night’s Spain-Portugal EURO 2012 semi-final, Portuguese captain, Cristiano Ronaldo was denied the chance to take a shoot-out penalty.

Billed as Europe’s top player, going into the tournament, the free-scorer’s exclusion from the game’s post-script has sparked debate, throughout the European football community.

The all-Iberian clash proved to be an intense, closely-contested affair. According to UEFA’s official statistics, only four shots were registered on target during the game (by both teams combined) despite a high standard of technical football being played. As such, neither team troubled the squinting extra officials within 120mins of playing time.

Unsettled by a motivated Portugal side, the ordinarily effortless Spain also failed to dominate possession. La Roja’s average pass completion percentage, across their four previous EURO 2012 fixtures, fell around the 90% mark. Portugal’s work ethic and competitive spirit reduced the Spanish completion rate, on the night, to an uncharacteristically low 75%. A Selecção’s captain Ronaldo, a pro-active leader-from-the-front, typified the bustling, high-pressing approach of the men in white.

However, when it came down to the shoot-out, the talismanic Real Madrid star was, controversially, designated to be Portugal’s fifth taker.

Disaster then struck for the Portuguese when, fourth selection, Bruno Alves crashed his effort off the crossbar and Cesc Fabregas hammered home the advantage for Spain. A 4-2 shoot-out victory was sealed, before a frustrated Ronaldo was even able to take a kick.

A strange sub-plot to this dramatic finale came in the shape of, set piece specialist, Alves stepping forward to take the third effort. This kick had to be halted, as designated taker Nani corrected Alves’ mistake. Alves was, no doubt, left unsettled by his mental misfire, and the rest is football history.

Immediately following the match, Ronaldo intimated that he was happy with the order designated by, coach, Paulo Bento. Nevertheless, the Alves error, perhaps, betrayed the fact that the Portuguese team didn’t fully understand Bento’s thinking.

Now that the dust has settled, it is widely believed that Bento chose to adopt a counter-conventional approach – deploying his penalty takers in reverse order of aptitude.

Since the dawn of time, the consensus of opinion, amongst the English mainstream media at least, has been that takers should be deployed in a straight-forward 1-2-3-4-5 fashion. Where this idea stemmed from is anyone’s guess.

In-line with Bento’s methods, there is now a growing 5-4-3-2-1 counter theory, propagated post-match by North American broadcasters Jason DeVos (ex-pro) and Bobby Wilson. Elaborating via Twitter, De Vos cited the academic journal ‘On winning the penalty shoot-out in soccer’ by T. McGarry and I.M. Franks (Journal of Sports Sciences) as their supporting evidence.

In another Journal of Sports Sciences publication; G. Jordet, E. Hartman, C. Visscher and K.A.P.M. Lemmink presented their findings on  ‘Kicks from the penalty mark in soccer: The roles of stress, skill and fatigue for kick outcomes’. Their findings include a detailed statistical analysis of the percentage of shoot-out penalties scored in World Cups, EUROs and Copa Americas.

Some other factors that we may need to consider, when deducing the perfect penalty order:

–          In any shoot-out, each team has a guaranteed minimum of three kicks. It’s impossible to gain an unrecoverable lead after only two.

–          The psychological effect of “getting off to a good start” can play a role in shoot-out success, but it is often overstated by the English media.

Members of the English school of thought, fronted by Messrs. Shearer and Hansen, seem to be oblivious to the lack of evidence which supports the, prehistoric, 1-2-3-4-5 method. There also seems to be a relatively small amount of statistical foundation behind the, more focused, “your absolute best player should go first” theory espoused by anti-academic analysts called Alan.

There is, on the other hand, compelling evidence that a highly-gifted shooter should not go last. The European football community may have been right to suggest that Bento took a major gamble by placing Ronaldo fifth. This tactic creates an effective double jeopardy situation. If the shoot-out does go to the last kick, the team in question would stand a strong chance of winning. If it doesn’t, the team would face increased odds of defeat. Perhaps, in making his decision, Bento trusted both his and the Spanish first four takers to successfully convert.

In conclusion, when it comes to Football Manager video games, this writer has long adopted a 3-5-2-1-4 approach, or similar. I believe there to be a certain amount of equity in placing a strong kicker first. However, I also believe that, as Jordet et al’s research reinforces, a team’s most technically proficient players should take the, often decisive, third and fourth penalties.

With this in mind, it’s interesting to note that Cristiano Ronaldo has scored over 91% of his penalty kicks, for club and country, since EURO 2008.