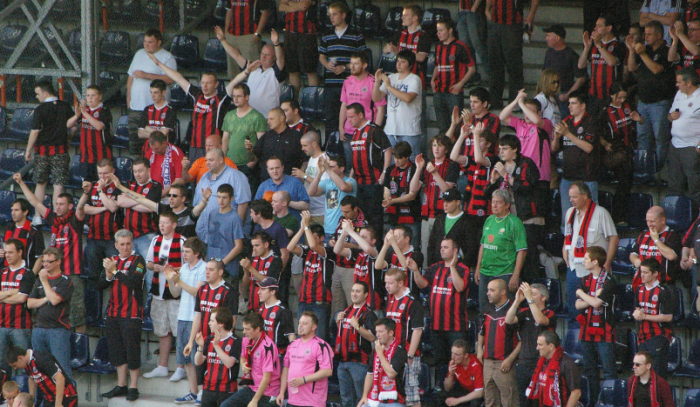 John Dodge takes us to task over an article on Irish football supporters that we ran over the weekend.

The article “New league season, same old problems” annoyed me in a variety of ways and I’d like to thank BPF for the opportunity to reply to most of them.

Growing up in Ireland I was never given the choice, so to speak, to support an Irish club as my ‘first team’.

What? Why wasn’t the author given the choice (sic) to support an Irish team? Only two paragraphs later he writes;

I did attend Irish club games in my youth though, my local side, Bohemians FC. Through attending a nearby school I’d be given free tickets from time to time – a clear incentive to try and gain a strong youthful fan-base.

So he was clearly given every opportunity to become a Bohemians fan. Why can’t he take responsibility for the fact he chose to support Liverpool instead of trying to suggest he was forbidden from choosing Bohemians?

How could the writer possibly think this to be true?  Does he honestly believe that over 50% of Irish football fans support Liverpool? Did he poll his friends and use that as the basis for the above assertion?  How did he become a Liverpool fan BTW?

So he’s saying that as a school going child he looked into the social and cultural links of all clubs in England he decided that Liverpool had the strongest claims. Do you believe him?

Ah there we go. He chose to support Liverpool because they were successful.

After a few years I stopped going though

This is the guy who wasn’t given an opportunity to become a Bohemians fan.

He thought the LOI wasn’t good enough for him but

Most of all though, it was the fact I already supported a side – Liverpool, and didn’t feel the same nor did I want to for Bohemians.

So instead of not being given the opportunity of supporting them, he acknowledges that he didn’t want to be a Bohemians supporter because he feels a stronger “cultural and historical” connection with the team in England than the one on his doorstop. Interesting take on culture.

This issue is exacerbated by Irish club fans who not only resent the FAI – Ireland’s football ruling body – but Irish national side fans who don’t support a club side.

On what basis is this claim made? I’m a supporter of St Patrick’s Athletic. 90% of my friends don’t support any LOI club. I don’t resent them. Would I like more of them to support my club? Of course, but that’s not the same as resenting the fact they don’t.  I think the author, who acknowledges he doesn’t go to LOI games so can’t have too good a grasp on the LOI masses, is taking the extreme points of view that surface online and mistaking them for what the majority think. In most walks of life, basing your argument on what the internet thinks is pretty dangerous.

On fans of LOI clubs resentment of the FAI. There’s a stringer basis for that claim but isn’t that the case with most sporting fans and their governing body? The English FA is not universally loved by football fans in England for example.

This mentality only serves to widen the gap between club and national fans.

The vast, vast majority of people who support an Irish club also support the Irish national team. The author would know this if he attended games and spoke to people (another example of online extremism shping his view?).  From my experience of travelling to watch football, all countries have fans who support their clubs and not their national team.  He should trying polling his cultural brothers in Liverpool and see how many of them support England.

The FAI isn’t alone in the blame game though

He hasn’t said what has been blamed on them yet…

This doesn’t make sense at all. There are a wide variety of ownership models in the League of Ireland. From members owned to co-ops to groups of local businessmen all the way through to single businessman owned clubs. How do they reflect “reflects the flagrant nature of spending throughout Ireland’s time of false wealth in The Celtic Tiger”

It’s widely acknowledged during this time of profligate spending, some players were earning up to €2,500 per week – way above anything sustainable. In recent years many clubs have met their end through financial difficulties. Sporting Fingal and Dublin City were lost completely while Limerick, Derry and Cork all had to reform following dissolution.

Those clubs weren’t spending close to €2,500 on any individual. Sporting Fingal folded because Fingal County Council decided not to continue with their project. Dublin City was only ever a vanity project for one man who couldn’t sustain interest. A new Limerick club was created over disputes between the old board and the FAI. Derry City folded after it was revealed previous directors were involved in offering dual contracts to players. Cork City went bust because an investment firm called Arkaga pulled out and left the club to pick up the pieces. Sure there were problems at all clubs, but it’s ridiculous to imply that €2,500 a week contracts were in play.

Incorrect. He might have seen a reference to this in 2012 though.

Since the appointment of Martin O’Neill as manager of the national side, he’s said he may have a look at players from the domestic league and assess if they can make the cut. Some players from the domestic league have featured in the past decade or so, such as Jason Byrne and Glen Crowe. Yet they were never close to being long-term fixtures in the side – and that was when the league possessed a higher quality.

He doesn’t go to the games but he knows the quality was higher. Perhaps he should point out that Byrne and Crowe (and Joe Gamble after them) were the first since 1986. The lack of Republic of Ireland internationals can’t be seen as a measure of falling standards.

Of the few who play domestically who stand out, are usually poached by English clubs.

This is true of every league but the Big 5 in Europe, isn’t it? If anyone excels in Ireland, or Belgium, or Switzerland ,or Scotland, they move to the bigger, richer clubs in England, Spain, Germany etc. I’m not sure why he’s using this as a negative against the League. For what it’s worth six of the Republic of Ireland starting XI last week v Serbia, and nine of those who played at all, have played in the League of Ireland.

Whether it should be the fans to start serious reform or the FAI,  it seems like a is a case of chicken or the egg.

This line confused me in a number of ways.  So many ways that I can’t even get my head around trying to explain it.  Suffice to say, “WHAT?!”

Reform of any kind always needs to start from the ground up, and if the FAI were seen as serious about instigating the growth of the domestic league, perhaps all football fans may join in on widespread reform.

So we’ve established who the chicken (or egg) is anyway. Above he said that fans of Irish clubs resent the FAI.  Now he’s saying it’s the FAI’s fault for not trying to grow the League of Ireland. Is he saying that LOI fans have a point?

As another league season in Ireland kicked off on Friday night, I hope it might see some new youthful fans taking the plunge and attending a game. You never know, you may find me there too.

Irish football has many problems. The author tries to suggest that one of them is the people who actually attend the games.  This is complete and utter bunkem. The people who watch Irish football clubs are simply football fans who enjoy going to watch their local team and all the accompanying social activities. They’re not the problem

The problem is the people who don’t go. The author can claim whatever “cultural” reason he likes but the reality is that as a grown man he chooses to support a team in England. There’s nothing wrong with that of course. The problem is somebody who has stated he doesn’t “want” to support his local team is trying to solve the problems of a league he doesn’t care about. Or at least he doesn’t care enough to watch the games.

The author loves chicken and egg references so here’s one for him. If more people go to the games, the standard of facilities and football will rise. Having a “I’ll go if everyone else is going first” attitude won’t solve any problems.

Neither will long winded, ill-informed diatribes about football he doesn’t care about.

What do you think? Let us know your opinion in the comments section below.