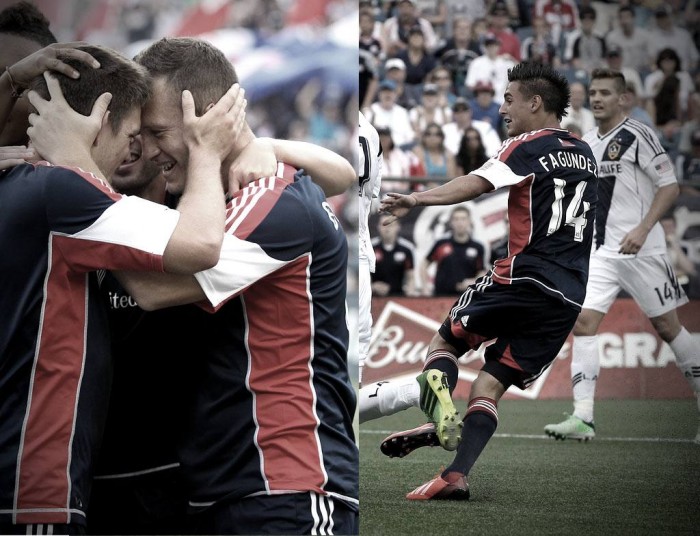 On a weekend which was dominated with international fixtures, it was a game in MLS that caused one of the greatest surprises.

New England Revolution was up with a tough test, a game against the two time reigning MLS champions LA Galaxy on a boiling hot afternoon in Foxborough, Massachusetts. New England was entering in extremely good form. If they were to win they would be on a three game winning streak and it was exactly what they did.

It was a remarkable feat when considering in the first ten games of the season, only six goals had been scored. Now they have scored nine in their last three. So what is it which has seen a recent emergence of New England and leads to them being in a position where they could well be competing for a playoff spot at the end of the season? Three key reasons: the signing of one player, a growth in team cohesion and the rise of a number of individuals including a certain 18 year old Uruguayan – American.

Let’s start with key reason number one, the signing of one player in particular, Juan Agudelo. At the start of the season, it seemed as though the ex-US International (and he will possibly gain more caps in the future) was to play the protagonist at what looked at the start of the season for a Chivas USA side seeking a revival. However, due to continuing turmoil amongst the management at Guadalajara’s little brother New England were able to pick up Agudelo for less than a dime. Not bad when considering Celtic were close to reaching an agreement with Chivas for a large lump sum in the January offseason.

In only three games, it looks as though the Colombian born American is slotting into the team perfectly, adding flavour as part of a fluid front three at New England where the point of attack is interchangeable. In the two games prior to the LA game, Agudelo has scored two in two. Previously whilst at New York he scored six goals but was limited to a very small number of starts whilst at Chivas he scored five, for the USMNT he had two. He already has two and was a bright spark once more in New England’s attack versus the Galaxy; could his European dream come true in the summer? We’ll have to wait and see, but so far – it’s encouraging.

Team cohesion has been another standout factor for New England’s turnaround in form and is what the Revolution can be most proud of. Statistically, the Boston based side are ranked the number one best defence in the league so far this season. Credit for that has to go down to Head Coach Jay Heaps who has implemented a rigid 4-1-4-1 system which quickly transitions into a 4-3-3 when on the counter. Although they are far less dominant in possession than the likes of Portland are (an average 57% a game) the attacking movement is superb and quick.

At the back, the number one 2013 Superdraft pick Andrew Farrell (who is built in a very similar mould of Micah Richards) looks to be developing into one of the league’s premier right backs, roaming up the pitch and can simply outmuscle and outpace most wingers in MLS. From a tactical perspective though, holding midfielder Clyde Simms has been one of the catalysts for a change in the Revs’ fortunes. New England used to be cut open with ease before the decision to place a permanent anchor in the centre of midfield. Their fluid movement comes with a consequence and that is that they are simply too open at the back. However, Simms seems to be easing the problem with his no nonsense, hard tackling approach. The central defensive partnership of Goncalves and McCarthy also seems to be strengthening every week as the understanding between the two improves. Defensively, New England is clearly solid. So what has led to such an increase in goals up front? One name – Diego Fagundez.

Fagundez is one of those players who, when you watch him, you just wonder how he does it. In MLS it is rare for a player of less than 21 years of age to be a permanent starter; this is mainly due to College and the Superdraft system. However, Fagundez began his professional career at New England at the age of 16. It was a bright start for the Uruguayan – American, scoring two goals in six appearances in 2011 before a relatively unimpressive two goals in 20 appearances the year later (although only eight were starts). 2013 has been different though, at the age of 18, Fagundez has netted five times in ten games in which nine were starts. Not only is his goal scoring record improving though but his overall game.

The spiky-haired teenager is clearly technically gifted but this year he seems to have gone a step further, his goal against Houston Dynamo was clear evidence of a man who can link up play excellently whilst being able to take on three or four men at once and has shown the kind of ability against a number of teams this season .The attacking triumvirate between him, Agudelo and the return of ex-Bayern Munich striker Saer Sene looks likely to become a devastating trio. Fagundez has been so impressive that the Designated Player and Olympics 2012 hero Jerry Bengtson has been reduced to the subs bench.

Of course we shouldn’t get too far ahead of ourselves. Los Angeles were without Robbie Keane and Omar Gonzalez who were both on international duty, not to mention this is only a three game winning streak that New England are on; it could quickly go wrong. However, the signing of Agudelo, coincidentally three games ago, seems to be the missing piece of the Revolution’s attack. Fagundez looks to be thriving off the service he is receiving from not only the likes of Agudelo and Sene but also creative playmakers from central midfield such as Juan Toja and the diminutive Lee Nguyen whilst defensively New England currently have the strongest backline in the league.

Things are looking good for New England for the first time in years, perhaps it’s right that they deserve their time in the limelight.