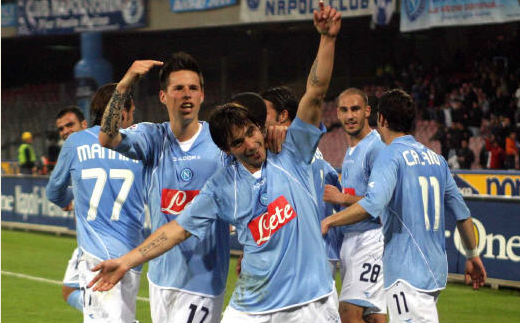 In 2011, everyone knows that Napoli are a good side. Coach Walter Mazzarri has done an excellent job with the Partenopei, and last season’s third-place was the club’s best Serie A finish in twenty years. They’re back in the Champions League for the first time in decades, and last week’s blistering 2-1 win over Manchester City has only compounded the belief that this is the best Napoli team since the Maradona era.

Their success has understandably garnered lots of press attention for their top performances. Edinson Cavani is now one of the most coveted strikers in world football, and rightly so. The Uruguayan’s 33 goals from 47 games last season made him one of Europe’s most prolific marksmen, and it won’t be long before he’s the subject of several big-money bids.

Cavani, Marek Hamsik and Ezequiel Lavezzi comprise Napoli’s “Three Tenors”. A fearsome attacking trio, there are few things in football as exhilarating as watching the Napoli frontline in full flow. Lavezzi’s dribbling and pinpoint through-balls provide the ammunition for many of Cavani’s goals, and Hamsik’s thrust and finishing make him a huge, deeper-lying goal threat. The Tenors are world-class on their day, and their performances have been a big factor in the Partenopei’s resurgence.

The problem with the Tenors’ success, however, is that many assume that Napoli are a three-man team. They’re vital players who Napoli struggle without, but Mazzarri’s men wouldn’t be anywhere near as successful if the eight players behind them were duds. Cavani, Hamsik and Lavezzi are eye-catching match-winners, but the Partenopei’s success is built on more than three great forwards.

Take Walter Gargano, for example. The pint-sized Uruguayan has been at the heart of Napoli’s midfield since 2007 but rarely receives sufficient credit for his performances. Gargano is a favourite among Napoli tifosi, but you rarely hear his name outside of fan discussions and local publications. Gokhan Inler’s summer arrival has pushed Gargano further from the limelight, but his performances have been just as good as the dynamic Swede’s.

Gargano keeps Napoli ticking over. He’s a full-blooded player who’s strong in the tackle; a veritable brick wall through which opposition attacks rarely pass. The Uruguayan’s talents aren’t limited to destruction, however, and his range of passing makes him a very well rounded midfielder. Napoli’s midfield would suffer greatly without Gargano, who sits back to hold the fort during Inler’s many forward forays.

Then there are the starting wing-backs, Andrea Dossena and Christian Maggio. Mazzarri’s utilization of three central defenders places huge importance on the wing-backs. Charged with stifling opposition wide play and driving forward to join attacks, they’re never static. Such constant shuttling requires a good engine and lots of discipline, with Dossena and Maggio both have in spades.

Dossena is more solid than spectacular. He’s improved since his ill-fated Liverpool spell and he generally does a good job, but his name doesn’t exactly conjure images of individual brilliance. Nontheless, Dossena is perfectly functional, a good crosser and a far better player than most English fans will remember.

Maggio, on the other hand, is indispensable. “Superbike” has blossomed into a consummate wing-back who’s good defensively and devastating going forward. His forward runs are expertly timed, his delivery is good, he’s a ball of energy and he scores a few goals too (15 in 100 Serie A appears for Napoli). Now a regular for Cesare Prandelli’s Azzurri, Maggio continues to improve every season and the Partenopei’s right flank is limp without him. Juan Zuniga is a decent understudy, but nobody can do what Maggio does.

Move deeper down the pitch and you’ll find arguably Napoli’s player of the season so far, Hugo Campagnaro. Typically playing as a right-sided centre-back, Campagnaro is composed, strong in the tackle and excellent at nipping past attackers and snatching the ball before it reaches them. His tendency to break forward and run with the ball makes him great fun to watch even when he has a rare off-day.

The captain, Paolo Cannavaro, sits between Campagnaro and the erratic Salvatore Aronica. Known for his leadership and love of the shirt, Cannavaro keeps the Partenopei organised. His anticipation is very sharp, like his brother’s, but Paolo is more of a blocker than a ball-player. Napoli need a more conservative defender to cover for the mobility of Campagnaro and Aronica, and Cannavaro is a top role-player.

Then there’s the ‘keeper, Morgan De Sanctis: an ever-present who hasn’t missed a Serie A game since signing in 2009. Possibly Italy’s second-best goalie after Gigi Buffon, De Sanctis is a great shot-stopper who’s very quick off his line and excels in one-on-one situations. The ex-Udinese man has bailed the Partenopei out on countless occasions, and will continue to do so for years to come.

Considering Hamsik’s growing inconsistency and Cavani’s diminished strike-rate this season, it’s time to give Napoli’s unsung heroes the praise they deserve. Every team is built on a solid foundation, and the Partenopei have that in Gargano, Cannavaro and co. The Three Tenors might grab the headlines, but they’re no more important than the players behind them.