Sporting Clube de Portugal have been left with an up-hill struggle to emerge from the foggy depths of their group in the Champions League after two games without a win they are bottom, but these results have come with a variety of positives to help keep the faith in the ever green side of Lisbon.

Sporting began their Champions League journey away against NK Maribor. A game which served up some severe disappointment for Sporting. After Luis Nani’s wonder strike in the 80th minute, Luka Zahovic equalised for the home side leaving Sporting damaged and worried.

Next up for Sporting was Chelsea; the powerhouse of the group. The expected outcome for his game was reality, however the game remained open throughout and Sporting were far from belittled by the boisterous Chelsea. 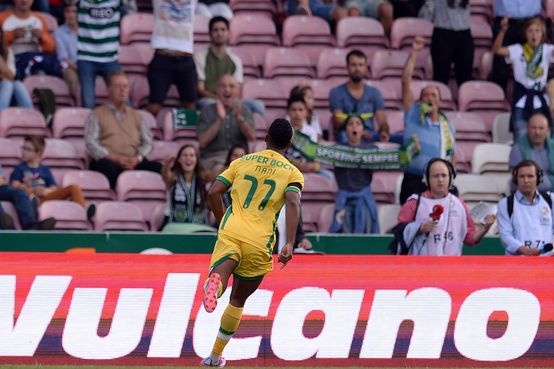 Sporting were defeated 1-0 at the Estadio Jose Alvalade, but there was a plethora of promising signs.

His lively nature did strike fear in to the Chelsea defenders and Nani was the obvious leader in a youthful Sporting side. If anyone can grab the group by the horns and help Sporting to prevail it is the Portuguese maestro himself. His experience will be crucial if Sporting are to meet the knockout stage.

However Nani was not the only positive for Sporting and their whole midfield played to a high standard and gave Chelsea some food for thought. The work rate of the midfield was first-rate and some of the passing was exceptional.

Adrien Silva was also a domineering force in the Sporting side and he epitomised what Sporting exercised on Tuesday night. His work rate, forward thinking nature and his passing of the ball was delightful to witness. Silva was part of every successful bout Sporting enjoyed.

The defensive hub William Carvalho as expected had a great game too. His defensive capabilities are incredibly essential to Sporting if they are to qualify as their defence does not look dense. He made some attack ending tackles, but he also linked the defence to midfield really well too.

Furthermore Rui Patricio had one of the best individual games to ever be showcased. Chelsea had a host of one on ones, which Patricio ensured they wasted. His saves proved why he has such a huge reputation.

Finally not quite a positive from Sporting’s performance, but from results elsewhere is FC Schalke only getting a point at home against Maribor. Schalke dropping points leaves Sporting with even more motivation to give the Champions League their all.

However it’s not all positive for Sporting: Their defence was poor. It was leaky all night and could not cope with balls over the top from Chelsea. Cesc Fabregas and Nemanja Matic exploited Sporting’s occasional high line with some inch perfect passes.

The goal that Sporting conceded was down to poor marking and Nemanja Matic capitalised. If Sporting are to qualify for the knockout phase, they need to tighten up.

From both set pieces and open play Sporting’s defence looked inadequate for this level of football. Set pieces will need to be worked up on, but if they can keep creating chances they can still qualify.

Sporting’s performance against Chelsea will have encouraged them to think more positively and target qualification. If Sporting can play with the same intensity and play in the same fervent way there is no reason why they can’t go on to beat FC Schalke and Maribor and qualify for the next phase.

One point from two games is worrying, but they do not need to hit panic stations yet. Results elsewhere mean they are still in with a chance and with Nani as their talisman; they can do it.