I’m shattered, I can’t believe it. It was our worst ever day. It’s the worst in my history, ever. Even as a player I don’t think I ever lost 6-1. That’s a challenge for me too.

Ferguson might have been wrong with his team selection and his tactics for the Manchester derby,but as far as we are concerned his biggest mistake was the statement he made above. As we see below the 6-1 defeat was certainly not the biggest of his footballing life (small consolation for grief stricken United fans) 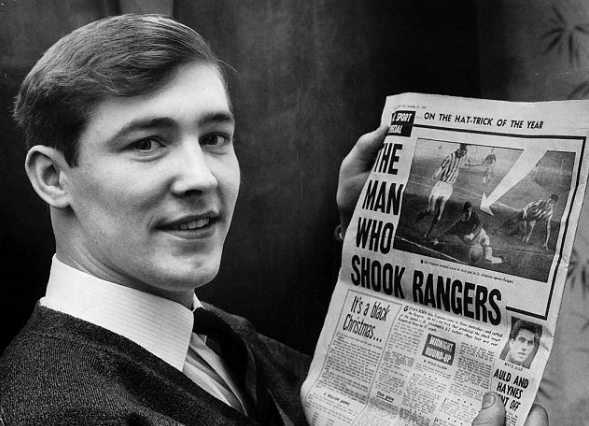 Back in 1960 Sir Alex Ferguson (just Alex Ferguson back then) was plying his trade for St Johnstone in the Scottish League. In those days Ferguson was a striker at his second club (his first was Queens Park) and was struggling to break into the first team. His first season for the club was a quiet one for him as a player, but it was a good one for the club’s reserve side, as they beat Falkrik to win the Reserves Cup.

Over the next season, after becoming a professional, Ferguson began to play in the first team. And he did well, scoring some important goals. There was drama on the final day of the season as Ferguson’s goal against Dundee was chalked off in a 3-0 defeat which led to St Johnstone’s relegation. Ferguson and his teammates learned after the match that if the game had finished 3-1 they would have been saved by virtue of better goal average.

The next season the club managed to win promotion and before the start of the new season, St Johnstone recruited lot of new players,so that they don’t spend another season fighting relegation. This was bad news for Ferguson and he was not looking forward to play for the reserves. His coach Bobby Brown was talking to Doug Cowie, the manager of Raith Rovers, regarding Ferguson. But before the deal could proceed any further Ferguson was put out of action by a facial injury.

During a reserve game against Airdrie,Ferguson jumped to challenge a ball in the air along with Jackie Stewart. Now, Airdrie had a mean reputation on the football ground and Jackie Stewart certainly took his club’s principles to heart. Next thing Ferguson knew was that he was lying in a hospital with a fracture cheekbone and a broken bone above his eyebrow. For six weeks Ferguson had to wear a plaster to support his face.

Ferguson at that time had two jobs,one as a professional football and another in a factory. It was during this time that he met his wife Cathy Holding. After two months of pain and embarrassment,the plaster was finally removed and Ferguson was ready for action. And this was when Ferguson suffered his biggest losses of his career and they were in back to back games. In his first game after injury St Johnstone Reserves lost to Celtic Reserves 10-1 and in his second outing, Kilmarnock reserves thrashed them 11-2. And as far as we know he didn’t score any of those three consolation goals.

Ferguson’s confidence in playing football was badly shaken and was contemplating on moving to Canada. The two comeback games he played for the reserves did him no good and there was a prospect of facing further humiliation as they had to face Rangers on the 21st of December.Ferguson had made up his mind that he was not going to play against Rangers, so he asked his brother’s girlfriend, Joan Parker to phone his coach and pretend to be his mother and tell him that he had flu.

When his coach came to know of this, he immediately sent a telegram to his house saying,”call me”. Ferguson’s dad was already using the “hairdyer” on his son after he came to know about the incident. When Ferguson called his coach he was shocked to know that he would be playing in the first team against Rangers as five players were out with real flu.

The next day at Ibrox changed Alex Ferguson’s life forever. Trailing 1-0 at half time, the future Manchester United gaffer scored a hattrick to take St Johnstone to their first ever win at Ibrox. Ferguson incidentally was a Rangers supporter all his life and he was the first player ever to score a hattrick against Rangers at Ibrox.

At the end of the 1963-64 season Ferguson moved on to Dunfermline and the rest, as they say, is history.

All Manchester United supporters will hope that this time too, like the last time when Sir Alex Ferguson faced a crushing defeat, he comes back stronger and never looks back again.

Founder/Editor of The False 9

One thought on “Mr Ferguson – you are wrong!”