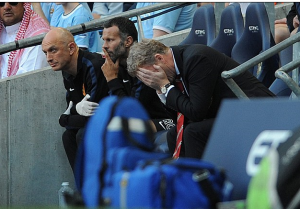 If a week is a long time in football, three weeks must qualify as an eternity.

In early January, and in the wake of his team’s shock home defeat to Swansea in the FA Cup, Manchester United’s David Moyes indicated his being resigned to this torturous winter passing without the reinforcement of his playing ranks by anyone of significant note.

“Most of the business will be more towards the summertime, rather than January” he suggested, perhaps keen to avoid being fleeced by prospective sellers ready to cash in on his clear, desperate need for high calibre recruits. Moyes, a man who positively defines ‘cautious’ in the footballing lexicon, would have been leery too of the January transfer window’s poor track record when it comes to presenting worthwhile investments to those seeking an immediate injection of quality.

Three weeks is indeed a very long time in football.

Since that date, United find themselves still in seventh place, six points away from the final Champions League spot. That is a position they must secure for 2013/14 to be deemed more than a crushing disappointment. For a club of such august ambitions, merely settling for fourth place may seem less than inspiring but even qualification via the preliminary rounds of UEFA’s flagship event secures the dual streams of cash and prestige (which in turn, invariably, translates into yet more cash) so vital to a club as financially complex as United. A dispiriting away loss to a Chelsea team primed for success at the season’s business end will not have helped in that pursuit of the top four.

The recent exit from the Capital One Cup must have burned also. The shootout defeat to lowly Sunderland certainly possessed an element of farce but it also represented an end to any realistic hopes for silverware in Moyes’s debut campaign. The winning tradition and relentless pursuit of glory is as familiar to the club as the colour red and, for all that competition’s reduced stature, the chance to break a listless run of form, at Wembley, against uppity local rivals surely induced more than indifference inside Old Trafford.

That Moyes was actively seeking a statement signing in the near future was an established fact. In light of the losses above, however, the expedited timetable for such an arrival suggests that he perceived a need to make that statement sooner rather than later. Juan Mata’s transfer from Chelsea is therefore no small thing.

An attacking midfielder of prodigious talents and startling consistency, Mata’s move north amounts to a renewed focus by the Manchester club to squeeze as much from the residue of this season as is possible. He is exactly the type of superior operator coveted by fans as yet unconvinced by the new manager and already sceptical of the Glazers’ willingness to expend serious capital on the best players available. By way of comparison, the marquee purchase of Mesut Özil, for instance, has proved crucial for Arsenal this year, their impressive passage to the summit of the league pyramid aided not just by the continued presence of an experienced man in the dugout but also by the perceptible lift stemming from the gliding German’s superstar status. 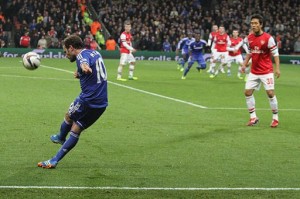 The Spaniard’s £37m transfer fee also signifies an outlay that the owners have long been touting. The slow realisation that Champions League revenues are rather important has, at last, spurred them into backing Moyes to an admirable degree. Such largesse is hardly unusual, the summer recruitment of Marouane Fellaini — a fine footballer, in spite of his struggles — was not exactly funded by cashing in penny stocks. Mata is an A-list name, however, ably existing in a completely different stratosphere to the clanking Belgian. The sum is hefty of course but with a number of years to run on a contract his value would be unlikely to differ much in the calmer waters of the summer window.

Nor does he qualify as a gamble given his pedigree as one of European football’s premier orchestrators. His new employers are as fortunate to be able to pitch him into their first team as his old ones were to have the luxury of parking on their bench a two-time club player of the year. Indeed, during his spell at Stamford Bridge, Mata won three trophies and scored for his country in a triumphant European Championship final. The sole blot on his résumé is the relatively low number of international caps awarded to him since his debut five years ago; an anomaly quickly explained when viewed in the context of the Spanish national side’s enviable coterie of ethereal creators.

Credit must go then to both Moyes and his paymasters for making the whole thing happen with the grim efficiency that once marked out Alex Ferguson’s better transfer dealings. Granted, Jose Mourinho rarely ties his shoelaces without a plan and, as dastardly schemes go, it is hardly outside the realm of possibility to imagine that he was willing to do business having considered the notion of his title rivals being hindered by a player for whom he no longer had a use.

That said, the focus shifts now to another untested strand of Moyes’s readiness, namely the ability to work with and utilise the highest profile recruit of his lengthy managerial career to date. Mata has no reputation as a prima donna but with all due respect to the honest professionals at both Preston North End and Everton, the Scot has never, before now, actively engaged somebody as truly excellent as his newest charge. Even his title-winning personnel are largely in place thanks to another man’s efforts.

It is on this topic that the most searching questions should be asked and in studying Moyes’s dealings with Shinji Kagawa there may be found some hint of an answer.

Kagawa’s mercurial abilities have morphed into something of a mythical beast at Old Trafford; everyone in the know maintains that they both exist and are worthy of more attention than the manager has so far seen fit to acknowledge. The Japanese is not on the same plane as Mata, admittedly, but prior to his arrival under the last regime he was widely rated as the leading player in the Bundesliga, a not insignificant accolade. It was a valuable one also and Ferguson was hardly sniggering behind his hand when he shelled out a cool £12m to Borussia Dortmund for their finest talent.

Much leeway was afforded to Kagawa in a moderately accomplished maiden season. The need to adjust to the Premier League is a theory on a par with gravity and thus the small bursts of his obvious talent were viewed as promising indications of good things to come. Instead, in his sophomore year the midfielder has apparently regressed.

Unable to establish himself in the starting XI he looks set to be relegated in the pecking order once more now that Mata has arrived to occupy the pocket of space between midfield and attack best suited to Kagawa’s skilfully elusive game. In a system where the forceful Wayne Rooney can also excel in the same position it seems that the Japan international’s days are numbered. It is the nature of his slow progress that offers a telling insight into Moyes’s ability to marshall the kind of free spirits rarely encountered during his more pragmatic tenures at Goodison and Deepdale.

There are no reports of Kagawa exhibiting bad habits or a disagreeable attitude and his gifts have been questioned by few. Yet, aside from intermittent appearances and some rare plaudits, he remains underused and ill at ease when called upon. It is safe to assume then that Moyes simply does not rate him or struggles to divine a place for him within a fairly rigid formation. Perhaps it is both.

The essential point is whether or not the United boss is minded to compromise his dour methods to accommodate a maverick. Mata will play centrally, that much is set in stone — he is both too exceptional and too expensive to be crowbarred into a berth on the wing — but Moyes requires some considerable tweaking to fit his best players into the team when injuries allow. Fortunately, the upcoming home fixture against basement dwellers Cardiff City presents him with a perfect opportunity to gauge the new man’s role.

It will not have been lost on Moyes that a great portion of his own fan base looks upon Cardiff manager Ole Gunnar Solskjaer with understandable affection. The hope that the Norwegian, a genuine club legend during his storied playing days, can aspire to the United hot seat in the not too distant future might be a minority view currently but it is undoubtedly one with legs. His own status as a relative rookie notwithstanding, Solskjaer’s ambitions may not be dissimilar.

In the meantime Moyes must hope that his new Spanish magician can weave enough magic to sustain and enforce a late season run at respectability.

One thought on “Moyes rolls the dice with Mata signing”