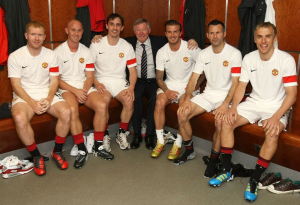 There is absolutely no doubt that the end of Sir Alex’s era was a seminal moment in the history of Manchester United. Long before any news of the changing of the guard went public last May, any vague rumours that Fergie’s retirement might be imminent were met with little more than flattering eulogies and the acknowledgement that following in his footsteps would be an exceptionally difficult and, quite possibly, thankless task.

Reality never crept in though; it was all hypothetical and imaginary and we never really got it into our heads that he would actually be gone. A huge proportion of fans couldn’t remember a time when Sir Alex wasn’t manager; he was so engrained in the culture and history of the club that he was synonymous with it. Imagining Manchester United without Alex Ferguson was like trying to imagine Christmas without Santa Claus.

Now, as January’s icy grip takes hold, we are more than six months into our post-Santa existence and David Moyes is finding that the boots and beard don’t fit him snugly just yet. However, despite numerous hiccups so far, the signs of life are still there and continued success may well be within his grasp if he is given time.

It is widely acknowledged that United’s main deficiencies lie in their midfield and Moyes’ only foray into the transfer market so far has brought little success as his trusted Everton talisman Marouane Fellaini has struggled to make an impact. It is somewhat ironic given Fellaini’s inflated price tag and the calls from fans to spend big that one of United’s best performers this season has been youth team graduate Adnan Januzaj.

Undoubtedly, the blossoming of the burgeoning talents of ‘The Class of 92’ provided Sir Alex with one of the key elements of the club’s domination during the Premier League era and I’m sure David Moyes is praying that players of a similar calibre can make the grade over the coming years. Januzaj has been the first to make the grade this season but many more are waiting in the wings, looking to make their mark – not least summer arrival Wilfried Zaha, whose first-team opportunities have been severely restricted. There are suspicions that the reasons are personal rather than professional but if that is the case, Moyes should swallow his pride and bury the hatchet. He needs his best eleven players on the pitch and personal grievances should be put aside for the good of the club.

Zaha, of course, is not a product of the club’s youth set-up but there are other young talents who are pressing for a promotion to the senior side. One youngster who has made great strides in recent times is teenage striking sensation James Wilson who has been in fantastic form so far this season. A confident and composed finisher, Wilson had been captaining Paul McGuinness’s Under-18s but has made a seamless and successful transition up to Nicky Butt’s Under-19s. A breakthrough to the first team this season may prove too much for him but everyone at Old Trafford is quietly confident that Wilson may well be the next one off the assembly line.

Wilson’s speed and athleticism stand out and he has been a prolific scorer at youth level – in September 2012 he broke Danny Welbeck’s record of four goals in an Under-18 game by netting five in an emphatic 7-1 victory over Newcastle.  After Wilson bagged a brace in an impressive UEFA Youth League performance against Bayer Leverkusen in the autumn, Butt told MUTV: “He has got an abundance of pace and has great finishing ability. He’s a nice lad and listens and works hard. He has got all the attributes to be a top player for this club and, hopefully, he’ll keep playing like he did today for us”. It’s early days yet and young Wilson has a lot of hard work ahead of him if he is to make the grade but the signs certainly are promising.

Of course, for every Ryan Giggs and David Beckham there are countless Terry Cookes, Luke Chadwicks and Philip Mulrynes – players who possessed great ability and promise but, for one reason or another, failed to fulfil their potential. Yet every now and again the stars align and a crop of youngsters emerge who will make the grade and prove themselves worthy. Januzaj has been the first – how David Moyes must be hoping that many more will follow his lead.