On a par with the League of Ireland First Division, the Russian equivalent, known as the Championship of the Football National League is where nobody wants to be.

Back when I was working with clubs floundering in this timezone, I labeled it the “Russian Graveyard” (here then on Russian TV) and it took.

Within the ‘graveyard’ there are zombie clubs, bankrupt clubs and a very few smart ones who try to build something sensible and semi-sustainable. One of them is about to escape the fetid clutches of their rotting foes and reach the accursed land of the Premier League.

Tom Tomsk (yes, that club who were buying Meldonium in January, 2016) are in the hunt to bounce back up. But ahead of them and promoted are Gazovik Orenburg.

Orenburg are from the Kazakh border, almost 1,500km from Moscow, and the club will be a really tough place to go and win for the Premier League fancy dans. It’s industrial (with a touch of education) and the economy is based on oil and gas.

My visits to the place have always been short and relatively bittersweet, yet the city supports all local teams (male and female) with an intensity that only can happen in small Urals cities – small being a population of a mere half a million people.

If Orenburg and the prevailing mentality can be compared to something in Ireland it would be Munster Rugby in the late-90’s to late-00’s before English and French souped-up muscle pushed the men in red (along with the three other Irish provinces) out of contention.

Gazovik Orenburg are a nice lesson in Russian football, that with some patience, giving the head coach his space and recruiting wisely, good things can happen. Brad Pitt would be proud of how ‘his’ discovery of Moneyball is working for this little club.

When Gazovik reached the Cup semi-final last year (losing narrowly to eventual Champs Lokomotiv) they had been close to promotion, though finished as the year before in fifth place.

I had worried that they were going to blow up and go bust, yet they believed in their head man, Robert Yevdokimov, whose coaching career was in danger of resembling his journeyman playing days when he played for 16 clubs in 18 years.

The Tatarstan native had played at the top level in Russia and for Kamaz Naberezhne Chelny in the UEFA Intertoto Cup.

Despite being a good enough midfielder to grace bigger clubs in Russia and for sure in most European leagues, he concentrated on his education, playing in the 1995 Universiade in Fukuoka for Russia where they lost to eventual winners Japan. Though they did come away with the consolation of Bronze medals following a 3-1 win over Ukraine.

After finishing his career in 2004 Second Division with Alnas Almetevsk in Tatarstan, he joined the coaching staff and took over the top spot in 2006. Fate was unkind as the global financial meltdown shut the club in 2008.

Robert and I met first in 2007, when he was in town to play Volga Ulyanovsk in the regional Second Division.

He was an interesting person to listen to and as Ireland’s Damien Richardson said, “This area has coaching and playing talent that won’t see the life of day.” I figured this would be how Robert would end up, bouncing between the 2nd Division and Russian graveyard.

He was back the next season with the birthplace of the AK-47, Izhevsk. Against logic and long odds he brought home Bronze (3rd place) for Soyuz-Gazprom, whom he also once played with.

Watching his team play was like something from home, with added skill. He got his players working hard, never quitting and despite a budget ranked 14th of 16 in the Division, they outshone many superior sides, including my own Volga. They tried hard, but ultimately missed out. 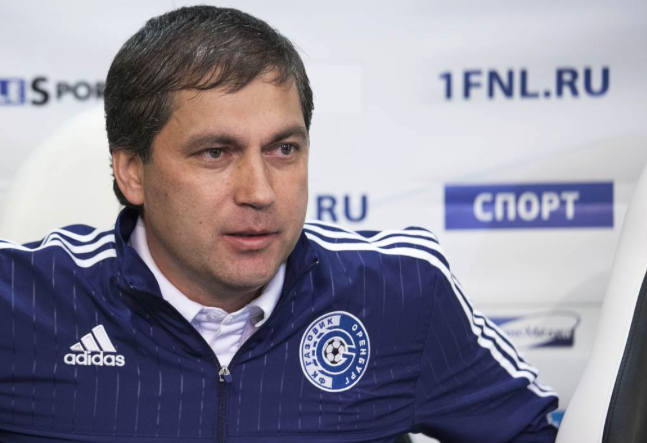 His reward was a return home to Chelny to take over his beloved Kamaz as they set their sights on escaping the second tier. His first season was a slight improvement, the team were up one place at the season’s end to fourth.

Yet this is where his bad luck kicked in again. Saturn Ramenskoe were leaving the Premier due to being broke and the next team in line, FC Nizhny Novgorod, were bankrupt. So on merit Kamaz were Premier League. Then money spoke.

Decisions were taken behind the scenes and retail billionaire Sergey Galitsky got his way and newly formed FC Krasnodar jumped up a division, yet again, and were made Premier League members.

2011-12, The Killing Season, saw off Kamaz and the ended the season fielding youth players. It was odd, then, when the next time I met Robert was again in Ulyanovsk and in the 2nd Division, with recently relegated Gazovik Orenburg. He had a simple reason.

The club had been building for years to be sustainable and like our own team, Volga, had gone up to get a taster of the 2nd tier. Yet they had confidence and stability to push again and at first time of asking he had them back in the Russian Graveyard.

Back-to-back fifth place finishes followed and this year with a definite spot in the promotion play-offs, though with five games to go the title is theirs to lose. They are eight points ahead of comedy club Arsenal Tula and 13 points ahead of Tomsk.

My poor Fakel Voronezh blew their chance to be in the mix with a lack of investment in their side and now sit in sixth, eight points off fourth place. And proving the mess that is the FNL, Spartak Moscow’s Reserve Team are two points behind fourth place Volgar Astrakhan.

A current joke is that next season the Spartak Reserve team could be waving ‘Hello’ at the 1st team as the latter descend yet again from the Premier, they truly are that awful.

However this isn’t about the farce that is Spartak Moscow or the self-destructive structure of Russian football leagues, nor even about the “Russian Graveyard”.

It’s about a man who has paid his dues, a club that has been doing the right things and a bunch of players who are bringing a tiny club to the top table in style. Robert has stuck to his principles and is now getting his just reward.

Next year will be not so difficult for Gazovik, they’ll win at least six home games (they’ve won 13 with 4 draws at home this season) and pick up enough points to finish in 10th or 11th, outside the relegation playoffs.

The issue will be getting a couple of decent foreign players in to add something to the squad and buy into the Yevdokimov mentality.

No matter where Robert goes, there is always a touch of drama and this season could end with more of the same. Kamaz, who last year romped to the Division 2 Ural-Volga title, are relegated already having scored a paltry 17 goals in 33 games.

Yet it goes on. In the last game of the season Gazovik must travel to Tatarstan to take on…Kamaz. So the team that were cheated out of a place in the Premier League in 2011, which sent them into a downward spiral to bankruptcy, could stop the man who brought them to the brink of the promised land from automatic promotion if not the title.

There are lots of zombies in the Russian graveyard and it’s making for a proper end to the season. Maybe Brad Pitt could pick up some pointers for World War Z 2!