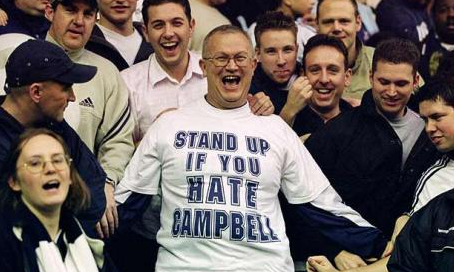 “Man as an individual is a genius. But men in the mass, form the headless monster, a great, brutish idiot that goes where prodded.” – Charlie Chaplin

A quote that is befitting of the modern football fan who, when in the company of other self proclaimed “die-hard” supporters are seemingly incapable of rational thought. The competitive nature of the Premier League is fast dwindling, yet the modern fan fails to recognise such a issue, preferring to act with such frivolity as to squander an ever increasing proportion of their salary by attending away games that have been rearranged to some impious hour to assist broadcasters. Intelligent people would not tolerate such self evident exploitation, but for some moronic football fans it merely allows them to pronounce that they are ‘hardened’ supporters.

I adore football, I am a devoted Manchester United fan and if presented with the opportunity to attend a game at Old Trafford I would certainly not refuse; yet my endearment to the club is being progressively tainted with the presence of senseless football supporters who arrive at Old Trafford with little more than a desire to act discourteously by casting aspersions on the people around them and the performance of players who are worshiped, often through the use of profanity. It may be a difficult concept to fathom but not everyone that attends a football match is a uncouth tyrant. It is often claimed that football is a ‘working man’s game.’ Now for the most part that expression is true, given the number of deadbeats that turn up at football grounds across the country. Although how is that the ‘working class’ are able to afford the astronomical cost of a season ticket? Surely state benefits are not sufficient enough to fund such a costly activity. But in spite of the inflated rates, we all still expect to attend a football match and be encompassed by people seemingly resigned to living in a dystopian civilisation. Why should we have to stand amongst people that generate an atmosphere more appropriate for an imminent pub brawl?

Rising prices in football are not in keeping with the nature of the sport, if your an Arsenal season ticket holder, you will now be expected to forego at least £951 of your income in order to secure a seat at the Emirates. If you ever wondered why Arsenal’s stadium bears a resemblance to a public library with respect to the absent atmosphere it is because ticket prices are so high that ardent supporters are not able to attend and as such corporate hospitality proves to be the most lucrative and time effective way for Arsenal to clear the debt that is tied to the £390 million Emirates Stadium.

Crowd chants. More proof if needed that there are a growing number of supporters acting with a degree of stupidity. Once upon a time, football chants that bellowed and reverberated around the ground were utilised for motivational purposes and an intimidation tactic for the travelling compatriots. Nowadays they are used to direct tirades of abuse at players and fans alike, I am not suggesting that such action did not exist ten or twenty years ago but it is certainly becoming more prevalent in modern football culture. Chants should be the very embodiment of a club, not a way to make disparaging remarks towards bitter rivals. What I find most foolish about offensive chanting is just how ironic some can be. Taking for example, Manchester United supporters at Old Trafford and their attitude to Northern counterparts Liverpool. The insults that are traded between the two clubs are disguised as “banter” but I would be more inclined to suggest that it is sheer hatred that drives such actions. Whilst some chants can be witty and are not bona fide opinions, other are just down right pathetic. Any Liverpool player (that includes former players) that visits Old Trafford with their respective club can expect to be greeted with the same old cry emanating from the Stretford End; “You scouse b******”. Can there be a more ironic group of words, considering that United’s talisman up front Wayne Rooney actually heralds from Croxteth in… Liverpool? It is this kind of moronic behaviour that only serves to act as ammunition for people who perceive football as a sport lacking class or intelligence.

Despite my damning criticism of football fans a few good men and women do still exist within the sport. I would be content in saying that the majority of supporters who like to air their grievances about football through the use of blogs do possess more intelligence that other fans, given that they are showing a willingness to interpret, discuss and evaluate a range of different elements that work in unison to provide us with the beautiful game. Fans that choose to condemn a player without sufficient knowledge or belittle a manager’s credentials without having experienced such a vocation are the kind of people that are contributing to the degeneration of our beloved sport.

So what can be done to address the problem of obtrusive football fans? Well, defiance may be the right approach, rather than stumping up in excess of £50 for an away game, just say no. If your getting tired of the Premier League, fire a warning by taking fresh interest in other European leagues. Start taking a greater interest in how the Premier League conducts itself, rather than fulfilling what is expected of you, conduct yourself in a manner that suggests football supporters possess the intellectual capacity in which to pass judgement.

Football remains the best and most loved sport in the world, but without some self-evaluation, the game will reach a point of no return. To stop football becoming monopolised by moronic football fans, take a stand, be subordinate and verify that not all football supporters share the same attitude.

That concludes my assault on imbecilic supporters, I fear I may need to batten down the hatches as I await the impending barrage of disapproval.

One thought on “Moronic Football Fans: An Ever Growing Monopoly”