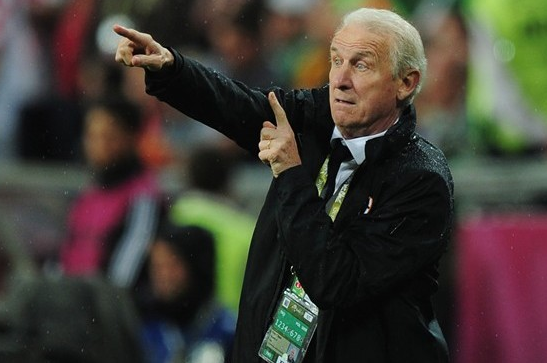 Giovanni Trapattoni has named his 29 man Republic of Ireland squad (which will be reduced to 23 at the end of the week) for the pivotal upcoming World Cup qualifiers against Sweden in Dublin and Austria in Vienna.

It wouldn’t be an Irish get together/squad announcement these days without someone’s nose being bent out of shape. This time it’s Andy Keogh’s turn. The Dubliner has accused Trapattoni of having “no loyalty” on Twitter following Sunday’s squad announcement.

The 27 year-old went on to reference the friendlies he showed up for against Oman last year and against Spain in New York back in May and his belief that he felt he merited a text or a phone call to be informed of his dropping from the squad rather than finding out from the TV.

Texts or phone calls are of course not Trapattoni’s preferred method of communication, though he expects texts to be replied to – as illustrated by his treatment of James McCarthy, who failed to reply to an SMS back in the summer of 2011 and who has only become a regular in the Irish squad since the Euro 2012 debacle. It looks as though Keogh – who scored at the weekend in Millwall’s 2-2 draw with Sheffield Wednesday – could be the latest player to be cast aside by Trapatonni.

Moving on to players who have a chance of playing against Sweden and Austria. Trapattoni goes into the first of the double header knowing that defeat will end any hopes of a World Cup play-off berth for next summer’s jamboree in Brazil.

There are a number of players who still need to prove their match fitness before the Irish squad get together next Sunday in Malahide. David Forde and Seán St. Ledger both still look unlikely to be match fit in time for the Sweden game, while Anthony Pilkington and Aiden McGeady also need minutes at club level, though Trapattoni has suggested that there is a possibility of Pilkington making his much anticipated international debut over the course of the next two weeks.

There is some positive news on the Richard Dunne front as the Dubliner looks likely to make the trip having now completed two games at club level this season and the 33 year-old looks set to face Sweden on September 6th. Trapattoni cast doubt on the possibility of the 33 year-old facing Austria in Vienna four days later though when the veteran Italian stated: “We play on September 6th and again on September 10th. Maybe he (Dunne) has not recovered his energy in time. The Austria strikers are different to Sweden’s, one is big but the other is quick.”

Trapattoni went on to muse that were Dunne to miss the game against Austria then John O’Shea and Ciaran Clark would likely replace him at the heart of the Irish defence. The former remains the favourite to partner Dunne against Sweden. If Dunne is to start against Sweden – as now looks almost certain barring injury this coming weekend – then the Dubliner faces the litmus test of marking the enigmatic Zlatan Ibrahimovic in Dublin. Last season’s top scorer in Ligue 1 with Paris Saint Germain, Ibrahimovic scored a hat-trick last time out for the Swedes and his combative style combined with sublime skills means he is capable of producing something out of practically nothing.

Trapattoni has set a target of four points from the two upcoming qualifiers. He was at Goodison Park over the weekend to watch Everton’s 0-0 draw with West Brom. One of the star men on the day was Irish right back Séamus Coleman who produced a typical effervescent display as he bombed up and down the flank.

Despite scoring the only goal in Hull’s win over Norwich on Saturday, Robbie Brady looks unlikely to feature in the starting line up because “Sweden have a right-back (Martin) Lustig who is like Coleman – always looking to attack and at the moment Brady doesn’t track back enough.”

The fact of the matter is that Coleman has been a revelation at both club and international level over the course of the past season or so. The 24 year-old had an effort for Everton over the weekend which hit the opposition crossbar and he was a constant threat going forward. If Ireland are to get a positive result against Sweden then it is likely through the Donegal man’s right flank that joy will come, though of course his defensive duties will also be pivotal on the night.