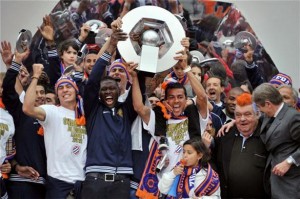 The 2011-12 European domestic league seasons will be remembered for many fine accomplishments. Manchester City won their first Premier League championship thanks to injury time goals by Edin Dzeko and Sergio Aguero. Juventus won Serie A for the first time since gaining  promotion from Serie B in 2006/07 whilst Real Madrid, under Jose Mourinho, broke the 100 points barrier in La Liga. Yet arguably the greatest achievement of the ‘bigger’ leagues in Europe was the stunning title winning run by Montpellier in Ligue 1.

In their first season back in the French top flight in 2009/10, Montpellier, managed by Rene Girard, caused a shock by finishing fifth place coming away with notable victories at both Lyon and Paris Saint-Germain. However the following season saw the team from the Languedoc-Roussillon region finish a modest 14th although a runners-up spot in the French League Cup suggested the team still had potential. Yet even the most knowledgeable of pundits could not have predicted what was to follow a year later.

In late May 2012 Montpellier’s eccentric owner Louis Nicollin stood amongst his player’s and staff sporting an outrageous orange and blue coloured mohawk as  thousands of fans gathered and watched as their team celebrated winning Ligue 1. The team, referred to as the ‘ugly ducklings’ by coach Girard, beat Auxerre 2-1 on the final day of the season to deny the big money-spenders PSG the title by three points. Nicollin, his team and their fans promptly celebrated in style after a crazy title race but the question on many people’s minds was ‘can they do it again?’

With the weight of expectation increased by the title win and the added factor of competing in the Champions League, the pressure was on Montpellier to reproduce their heroics from the previous year. Manager Girard did a good job of maintaining the majority of his squad but the loss of top goal-scorer Olivier Giroud to Arsenal for £12m proved a massive loss over the course of the season. To further rub salt into the wounds, Montpellier were drawn to play Arsenal in the group stages of the Champions League meaning they would start their maiden voyage in the competition against their former talisman instead of with him.

The disappointment of losing Giroud would set the tone for a poor season which saw the side go without a win from their six matches in Europe whilst finishing a below par ninth in the league. Defeats to lowly Evian and Ajaccio on top of losing influential defender Mapou Yanga-Mbiwa to Newcastle midway through the season suggested the short-lived glory Montpellier had achieved at the start of 2012 was just that.

After the disappointment of the 2012-13 season further changes were made at Montpellier. Manager Girard swapped the Stade de la Mosson for the Stade Pierre-Mauroy of Lille whilst striker John Utaka, who scored both goals in the victory that clinched the title in May 2012, left the club for Sivasspor. The loss of star player Younes Belhanda to Dynamo Kiev in a reported £10m deal had fans further fearing another slide down the table was on the cards. During the course of the season 12 new players were brought into the squad on a mixture of permanent, loan and returning loan deals.

New manager Jean Fernandez was tasked with improving the team but results were poor and he left the club in early December 2013. The job of keeping the team up was given to former manager Rolland Courbis. 61-year-old Courbis, who was jailed in 2009 for accepting transfer bungs, steadied the ship to see Montpellier finish 15th in the table, albeit only two points above relegated Sochaux in 18th place.

From first to 15th place in two seasons is a dramatic fall for any club regardless of size of wage budgets or transfer kitty. Expectations are now not as high after a couple of unspectacular seasons meaning Montpellier can focus on becoming a solid and stable team again. This summer has seen further key players being sold with Remy Cabella and Benjamin Stambouli leaving for Newcastle and Tottenham respectively.

Yet the signings of Kevin Berigard, who scored ten of 39 goals for Evian in Ligue 1 last season, and Paraguayan international Lucas Barrios indicate there will be sufficient quality for Montpellier moving forward. Under the continued stewardship of Courbis, a man who knows the club like the back of his hand, a steadier season should be in store for the former champions.

For any club looking to build on previous success, finding the right balance between keeping hold of players and bringing in new players is key. In the same year as Montpellier won Ligue 1, Manchester City won the Premier League. On Saturday 30 August 2014 City took on Stoke and featured six players in their starting line-up that also started on the day they won the title against Queens Park Rangers in 2012. Joe Hart, Vincent Kompany, David Silva, Samir Nasri, Yaya Toure and Sergio Aguero played in both of these matches and have subsequently experienced another Premier League title victory.

Also on Saturday 30 August 2014 Montpellier took on Nantes and featured only three players in their starting line-up who also started on the day they won Ligue 1 against Auxerre in 2012. Geoffrey Jourdan, Vitorino Hilton and Jamel Saihi are the only players who played in both fixtures which is indicative of a team who has lost too many of their previous stars.

It has been a rapid decline since that glorious title victory in May 2012 but this season Montpellier have already shown signs of improvement by winning two of their four Ligue 1 fixtures including a terrific 2-0 victory away at Marseille. A season of steady improvement hopefully awaits the former champions.