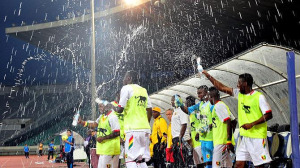 On first glance Guinea’s victory over Uganda merely represented the vehicle that denied Uganda the conclusion of a 36 year AFCON exile, however in accomplishing victory over the devastated cranes the West African’s were able to script a compelling qualification story of their own.

In the historical stakes Guinea reaching their first finals since 2012 barely scratches the surface of quite what a momentous narrative Uganda shaking over their perennial bridesmaids tag would have signified, yet considering the stumbling blocks the national elephants have been forced to negotiate their journey to Equatorial Guinea should not be undervalued.

The Ebola crisis has symbolised a burgeoning subplot throughout AFCON qualification however whilst the majority of nations have been only superficially hindered by the disease, Guinea together with Sierra Leone were as a knock-on of the pandemic left severely hampered.

Prior to the commencement of qualification both were instructed to seek alternative accommodation for their home fixtures, after CAF opted to ban international fixtures in those nations most affected by the virus. Seeking that temporary home developed into an arduous task, with a number of countries displaying anxieties in relation to hosting nations affected by Ebola.

However, compared with the toils in which Sierra Leone endured during their relocation mission, Guinea were re-homed relatively swiftly as Morocco offered Casablanca as a venue for the duration of the process.

Traditionally on a continent of such varying climates and cultures home advantage has consistently proven a decisive variable – with that in mind it wouldn’t be fathom from the truth to suggest that without the home comforts of Conakry Guinea entered qualification with one arm tied behind their back.

The qualification gods had already dealt a hand which meant Guinea’s qualifications aspirations were anything but secure – the national elephants were paired alongside Ghana, Uganda and Togo – with many envisaging that the void of home fixtures would seemingly swing the qualification pendulum pivotally away from them.

That Guinea were forced to relocate doesn’t begin to script the full extent of how they have suffered at the hands of Ebola, with the stigma attached to the disease meaning the Guineans have persistently received an apathetic reception throughout their qualification assignment.

For instance in Casablanca twice daily their players were forced to undertake temperature as a precautionary measure, whilst they have continually been forced into skirmishes regarding the concerns of clubs who suggested releasing their players was simply a risk not worth entertaining.

In a recent interview with the BBC, Sierra Leone captain Kei Kamara offered an insight into the level of apprehension being channeled towards the national team during the qualification process:

People are staying away from us, even though we live in Europe and play there. When we say where we’re from they are scared to be close to us.

Guinea coach Michel Dussuyer has talked of a similar reactions towards his team, in spite of Guinea’s squad being almost entirely European based and thus making the potential for spread minimal.

Considering both the severity of the disease and its panic-stricken portrayal in the media it would be unsympathetic to criticise such reactions of trepidation, nonetheless what can’t be denied is that for both Guinea and Sierra Leone this has created a hugely uncomfortable environment.

In the chaos of who will host the impending tournament, few qualms were made that Guinea failing to qualify would be of logistical benefit – to such an extent that the national elephants would have been forgiven for feeling unwelcome at Africa’s premier competition.

Prior to the concluding round of fixtures, the possibility of Guinea missing the qualification boat appeared the most liable outcome, with Dussuyer’s side having acquired only four points from the same number of games and thus were left marooned at the foot of the group E table.

Nevertheless with room for manoeuvre at a premium, Guinea would over the course of four days disparage the substantial adversity to claim a spot at January’s showpiece.

Arguably the stars aligning against them acted as a galvanising tool for Guinea, with the manner in which they belittled the stakes to emphatically overcame Togo and thus set up a do or die clash with Uganda vindication of that.

Defeat in Lome would have guaranteed elimination, yet inspired by Seydouba Souma’s treble Guinea showcased little influence of those stresses in recording a 4-1 mauling of their inconsistent hosts – who had entered the contest in buoyant mood following successive wins over Uganda.

Similarly whereas Uganda were hindered by the historical connotations attached to accomplishing qualification, Guinea cut a side free of shackles as goals from Ibrahima Traoré – who in representing his country was forced to defy the advice of his club – and Soumah secured a tenth AFCON appearance – few will have been achieved in more trying circumstances.

January’s showpiece is liable to only provide Guinea with yet further off field obstacles, given the tide is unlikely to turn in regards to the largely frosty reception they have been afforded throughout the qualification process.

Nonetheless there is substantial scope for the national elephants to continue their absorbing tale of conquering such negative influences.

Should the draw fail to provide a much deserved break, Guinea boast of a vibrant assortment of attacking riches – Soumah, Traore, Mohamed Yattara and Idrissa Sylla form the basis of an offensive unit brimming with pace and energy – capable of providing a lasting mark on the tournament for that right reasons.

Accomplishments on a football field are mere nonsensical when compared to the life and death implications attached to Ebola, nonetheless in qualifying for the impending AFCON Guinea’s footballers have at least provided a timely moments rest bite – no matter how minute that relief might be.