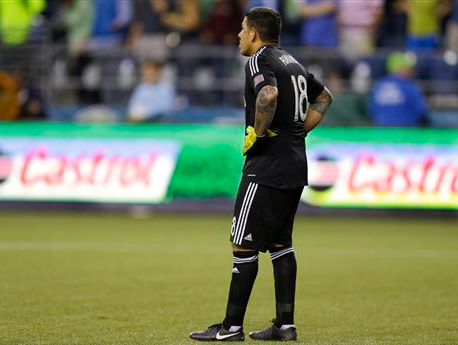 As part of the ever growing British crowd of football (or soccer) fans who follow MLS quite avidly, I am understandably excited by the new MLS season which kicks off on the 8th of March.

This excitement has been amplified by the MLS fantasy league being brought to my attention, and with the new season looming, time is running out to put a side together.

So in line with this, and in honour of BackPageFootball’s public MLS Fantasy League (which you can join by entering the code below) I have decided to look at the goalkeepers who could light up MLS and your fantasy team this season!

Last season’s “Allstate Goalkeeper Of The Year” and part of the MLS Best XI, this Jamaican born stopper should be a shoe in for most fantasy players. Best known amongst British fans for his time with Bolton Wanderers and his successful spell at Bradford, Ricketts has gone on to win over 100 caps for Jamaica and has solidified his place as one of MLS’ top shot stoppers.

With a total of 14 clean sheets (or shut outs) last season- the most in the league- Ricketts seems to have grown with his age, and at 36 is one of the most cultured keepers plying his trade in America’s premier footballing competition. His save percentage for last season stood at an impressive 73% as he thrived under new coach Caleb Porter, just one of the statistics that makes Ricketts probably the best goalie on paper going in to this season.

Going for $6million, Ricketts is pricey but should be reproduce his form of last season for the resurgent Portland Timbers, he could be getting you valuable points this season.

Standing at only 5″9, one would be forgiven for thinking that Nick Rimando was not built to be a goalkeeper, nevertheless the California born stopper has been one of the stand out performers in MLS over the past few seasons. Part of the Real Salt Lake team that was so cruelly denied their second MLS Cup in five years on penalties last season, Rimando’s notorious reflexes were one of the cornerstones to the Utah side’s success.

Despite being well known for his somewhat unorthodox goalkeeping style, Rimando has racked up just shy of 200 appearances for RSL, also has over 13 caps for the US National side so is a goalkeeper of considerable pedigree. The three time MLS All star performances last season saw him get 9 shut outs, plus be rewarded with the MLS Save of the Year award for the second time.

His price of $6million means he is amongst the most expensive keepers one can get for your fantasy team, nevertheless he would be a fantastic choice for anyone’s fantasy team this coming season.

If you are looking for a slightly more budget option, then look no further than DC United goalkeeping behemoth Bill Hamid. Almost polar opposite to Nick Rimando, Hamid stands at a massive 6″3 and is a massive presence in his penalty box. Blessed with fantastic reflexes and a natural athleticism, Hamid has all of the physical attributes to be a top drawer goalkeeper.

At the tender age of only 23, Hamid is already somewhat of an MLS veteran, having already amassed over 80 appearances for DC United and is firmly established as one of America’s finest up and coming goalkeeping talents. His talents have not gone unnoticed in Europe, and in 2011, Hamid spent two weeks on trial at Premier League Club West Bromwich Albion.

Whilst his shutout record last season was less than impressive (amassing only four all season), his 80%  save ratio and $5million price make this young American a great choice for your team.