This year’s MLS Cup couldn’t be set up any better if you’re a fan of the LA Galaxy, with national hero Landon Donovan playing his final game as a professional player and the club aiming for a record fifth title.

However, the New England Revolution will be no pushovers and go into Sunday’s clash at the StubHub Center confident of playing the role of party poopers.

Both came through tough Conference Finals, with the Galaxy benefitting from the away goals rule to beat the Seattle Sounders in the West, and the Revs seeing off the New York Red Bulls 4-3 on aggregate.

The clubs have met twice in MLS Cup previously, in 2002 and 2005, with the Galaxy winning 1-0 after extra time on both occasions.

The Revs have never won top honours, with the most recent of their four defeats coming against the Houston Dynamo back in 2007, and they will be keen to finally get off the mark.

Coach Jay Heaps played in all of those losses and the 38-year-old former Revs defender has a big chance to exorcise some ghosts having resurrected a side that went through a worrying mid-season slump.

The late-August acquisition of national team midfielder Jermaine Jones brought stability to New England and gave them a welcome boost after they lost eight games straight, one shy of the club record set in 1997 and equalled in 1998.

Jones’ signing was quite fortuitous as MLS conducted a blind draw between the Revs and the Chicago Fire to decide where the 33-year old would end up.

His composure and drive in the middle of the park coincided with a late run of regular season form, and the Revs enter MLS Cup with a record of 11-1-1 record over the last 13 games.

Interestingly, no Revs player apart from Lee Nguyen (18) scored more than five goals during the regular season, though Charlie Davies came up trumps in the playoffs with four goals in four games.

“We understand the importance of winning it all, because you never know when the opportunity’s going to come again,” says Shalrie Joseph, one of only two players in the Revs squad to have played in MLS Cup.

“This opportunity doesn’t come around often, so once you have an opportunity, you have to grab it and seize the moment. We’ve got to be ready to do that on Sunday.”

Another man who has played for the Revs in MLS Cup is Matt Reis, now goalkeeping coach at the Galaxy.

Reis spent 11 years between the posts in New England before hanging up the gloves at the end of last season to take up the role in LA.

“The Galaxy was great to me at the end of my career and gave me a job after I retired,” Reis told the Galaxy’s website.

“It’s been a fantastic year. And to be a part of this ride, too, and to see how much work we put in to get to an MLS Cup…whether you’re a player or a coach, to get to the final game and be a part of that is what everybody in this league wants to do.

“This is my seventh final, and the fact it’s against the Revs is just really, really ironic.”

Galaxy coach Bruce Arena is aiming for his fifth MLS Cup and third since moving to LA in 2008 having already picked up two with DC United.

The former national team boss has built a dynamic side that has a healthy mix of young and old, with even his back up players making key contributions over the course of the season.

While A.J. DeLaGarza, Robbie Rogers, Omar Gonzalez and Leonardo have been the regular back four, the likes of Todd Dunivant, James Riley, Dan Gargan, Tommy Meyer and the now departed Kofi Opare all performed well when called upon to cover injury and international duty.

The MLS Best XI was named earlier this week and includes four players who will be participating in Sunday’s game – Landon Donovan, Robbie Keane, Omar Gonzalez (all Galaxy), and Lee Nguyen (Revolution).

Donovan’s swansong promises to be an emotional affair, win or lose, and he will bow out as the league’s record holder for both goals (144) and assists (136).

Keane, meanwhile, saw off Nguyen and Seattle Sounders striker Obafemi Martins to claim the 2014 Most Valuable Player Award having contributed 19 goals and 14 assists in 29 games.

Given their pedigree in MLS Cup and the firepower at their disposal, the Galaxy are understandable favourites to get the job done in their own backyard.

However, the Revs were also being written off during their midseason slump and bounced back in stunning fashion so it would be no major surprise to see them finally break their duck on Sunday. 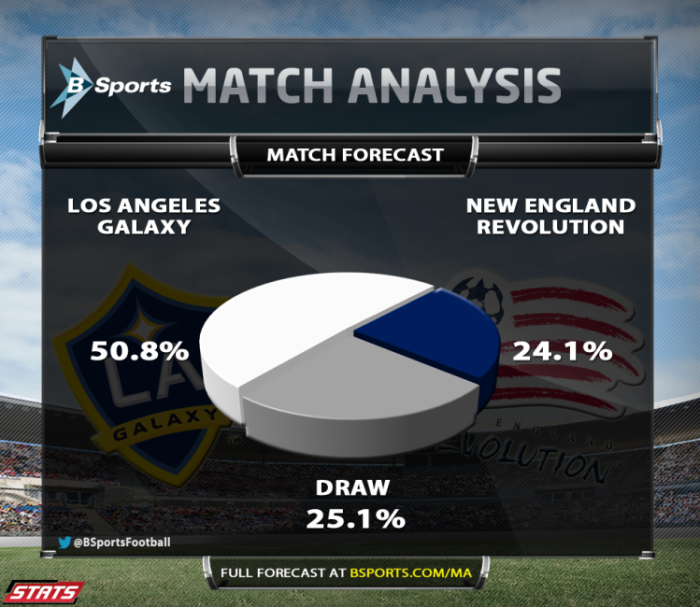 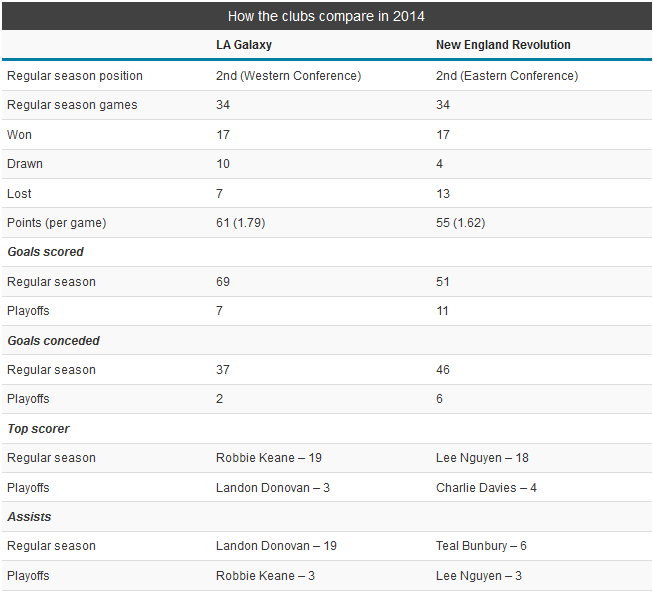