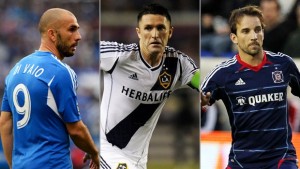 As the MLS Best XI is to be announced on December 3rd and the 2013 season reaches its conclusion with the MLS Cup fast approaching on the 7th December, it seems a good time to take a look at what this year’s team of the season could possibly shape up to look like. Although perhaps tactically inadequate with the personnel, the formation will be a 3-4-3 to cater for the best talent MLS has offered us this year.

Having incredibly never won Goalkeeper of the Year, Nick Rimando can take great credit in helping lead Real Salt Lake to their first MLS Cup final in four years. At age 34, Rimando is still able to churn out excellent stats for his team, recording the joint best save percentage with 73%. His reflexes, shot-stopping and one-on-one ability is tremendous to watch, putting together a number of show-stopping saves once again. The US International has been regarded as one of the league’s premier keepers for the last decade, if he keeps going strong into the start of 2014, Klinsmann may have to push Rimando up from being the third choice goalkeeper for the World Cup.

Before Gonçalves joined New England Revolution on loan from FC Sion at the start of 2013, hardly anybody knew of Gonçalves’ name – certainly not a player you would expect to be named MLS defender of the year by the end of the season. The man from Lisbon won the award obviously. Gonçalves started every single game of New England’s gruelling 2013 season, helping to tie New England’s defence as the third best with 38 goals allowed. The 28-year-old is a true all-rounder for a centre back, has a deceptively deft touch, possesses the composure to pass out the back while not afraid of a physical challenge. The ex-Hearts central defender has contributed two goals in 2013, including a crucial game-winner against Montreal to help send New England through to the MLS play-offs for the first time in five years. Even better news for the Revs is that Gonçalves has signed permanently for, at least, until the end of 2014. Let the good times continue in Boston with Gonçalves  at the helm.

The US International was unlucky not to claim Defender of the Year after a third consecutive stand-out season for the centre back, firmly cementing himself as one of MLS’ marquee players.  Besler was voted as an MLS All-Star once again after doing so in 2011, showing just how important he is to the league with his consistently solid performances. Besler’s role for Sporting KC is to sweep up any loose balls that partner Aurellien Collin may not get to; he performs the role admirably, keeping Kansas City with the lowest goals conceded in 2013 even with their demanding high line. At the age of 26, Besler still has plenty of time to secure his move to Europe; a strong 2014 World Cup may be all the Kansas native needs to finally push him over the line.

It is unusual to find a left back that is able to deliver as many a lethal cross as Chris Klute is able to. Klute was playing in the NASL before landing a loan move to Colorado Rapids, the transfer was made permanent in July 2013 – it’s not hard to see why. The 22-year-old is both footed, meaning he isn’t your standard, predicable fullback who will stay tight to the byline. However, it’s not bad when he is as the young American has contributed 7 assists from his left back role. Klute has great size and a turn of speed, perhaps suggesting that Colorado Rapids head coach Oscar Pareja looks to have made one of the most intelligent signings of the season. Klute is currently discussed as being in the running for USA January camp, after his first season in MLS; it would look foolish for Klinsmann not to include him.

Perhaps the brightest young prospect, not just in MLS, but potentially for US Soccer. Diego Fagundez scored 13 goals with 7 assists, making him the fifth highest goalscorer and in the higher bracket for league assists – oh and he’s 18! The Uruguayan-American has shown moments of sheer brilliance, whether that be jaw-dropping dribbles or incisive passing, his exceptional speed or his mind blowing technique, he is showing himself to be the real deal in only his third season playing professional football. New England have a potential superstar on their hands, it is up to GM Mike burns and head coach Jay Heaps in helping Fagundez maximise the incredible potential he is proving to have.

There is no denying that Cahill had a mediocre first season in MLS in 2012. 1 goal in 12 appearances drew criticism from a number of Red Bulls fans; you can’t blame them when considering the Australian is the fourth highest paid player in the league with a base salary of $3.54 million. In Cahill’s defence though, he did join mid-season meaning he was without a full pre-season at the club. 2013 was a complete turnaround though as Cahill scored 11 goals with five assists, even more impressive when most of this production was from the centre of midfield before Petke fully appreciated his goal threat, pairing him with Henry up front towards the end of the Red Bulls’ Supporters’ Shield winning season. Cahill can proudly boast scoring the quickest goal in MLS history (seven seconds) and shown to be a devastating aerial threat once more. His goal tally may reach new heights if placed as a striker for the entirety of next season.

Valeri was the catalyst for the Portland Timbers’ whirlwind 2013 season, a season in which the Timbers topped the Western Conference after a miserable 2012. The Argentine DP arrived in MLS from Argentine Primera side Lanus with heavy expectations placed on him – he had to deliver instantly. Ten goals and 13 assists suggest he did just that. Valeri epitomises the Caleb Porter philosophy, technically proficient with great vision and an eye for goal. Valeri is the true picture of elegance on the pitch and it would be a disgrace if he was to not be awarded Newcomer of the Year. He will certainly be first choice in many a fantasy football side next season.

A true warrior. Magee has evolved from being a dependable winger for the MetroStarts into a clutch player for LA Galaxy before becoming one of the league’s greatest goal predators for Chicago Fire. Magee was controversially traded away by Galaxy Head Coach Bruce Arena in May 2013 in a trade deal for the rights of Robbie Rogers. Magee scored six goals in 10 appearances for LA at the start of the season before departing to his home-town. It was a move which showed great humility, understanding that LA had to remove somebody off the wage bill to bring Rogers is, Magee volunteered to be traded. Chicago looked to have got the better end of the deal as Magee has 15 goals in 22 appearances, 21 overall making him the second highest scorer in the league this year. How Magee has never been awarded a US National Team cap is astounding and should certainly be considered after a fabulous 2013 for the 29-year-old.

An incredibly talented individual from Brazil, Camilo has enjoyed the best season of his career. 22 goals was enough to make the man, who has spent periods of his career in South Korea and Malta, the MLS Golden Boot winner after sealing a hat-trick in the final regular season match against Colorado. Camilo is everything you imagine when thinking of a Brazilian footballer; two footed, skilful and ability to fashion chances out of nothing. There is not a better example of this than his stunning overhead kick against Seattle, surely the goal of the season.

Di Vaio has done exactly what was required of him for Montreal this season – he scored goals. The Italian, even at the age of 37, contributed 20 goals. Di Vaio has built a career on running in behind opposition defenders before cooly placing his shots into the net. Montreal recorded the highest number of offsides in the regular season mainly because of Di Vaio who has seen the flag raised 78 times in 2013, if he scored 20 goals though it’s unlikely you can get too frustrated at the seasoned veteran. With fellow teammate Alessandro Nesta announcing his retirement from football with immediate effect, Di Vaio announced last month that he was to stay with the Impact for 2014. Perhaps if Di Vaio gets called offside a few more times next season his goal tally may improve even further.

16 goals and 11 assists in just 23 games played because of injury and international duty commitments. Does anything else really need to be said about the talismanic Irishman?

2013 has been a great advert for MLS as the quality/standard on the pitch has risen once again. Many new signings have quickly emerged as star players in the league with some showcasing their talent one last time in 2013 on December 7th, the MLS Cup final. Roll on December 7th and roll on 2014!