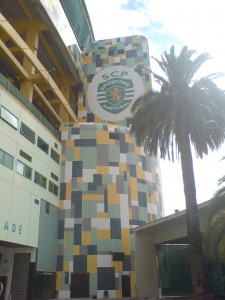 If Franky Vercauteren was in any doubt as to the size of the task he faces in turning around the fortunes of Sporting Clube de Portugal then he should be fully aware of it following his first match in charge.

Sporting lost 2-1 at Vitória Setúbal on Sunday, continuing their dire start to the 2012/13 season and extending their winless streak to seven games. In 14 competitive games this campaign the Leões have mustered just two victories.

In the first half on Sunday Sporting showed a glimmer of something different; there was something in their play that hinted at an increase in confidence and positivity, they showed some fluidity and creativity in attack that had at times been lacking in previous games.

Vitória Setúbal scored a somewhat fortunate goal to open the scoring but Sporting continued in a positive manner and Jeffrén’s neat finish shortly before half time was the least their endeavours deserved. However, in the second half something was missing, something had disappeared from Sporting’s play and that served to demonstrate that change won’t come overnight to this new-look same-old Sporting side.

Former Belgium international Vercauteren has already indicated that he is not looking for a revolution and that change will come little by little. Results might have to come a little faster though if Sporting are to get back on track this season. The title race seems a long way off for the Leões, who currently sit in 13th place (of 16) in Portugal’s Primeira Liga, 13 points behind leaders Porto and Benfica and just one point above the relegation zone after eight games.

It is not that this Sporting squad lacks talent, it contains plenty of internationals and players who will know themselves that they haven’t been playing as well as they can this season. The attitude and motivation of the players has been questioned and this may be something that Vercauteren needs to address. Organisational aspects will also form part of his immediate focus. Vitória Setúbal’s winner on Sunday came in a moment when the Sporting backline seemed to switch off entirely and simply watch Cameroonian forward Meyong run in behind to bury the deciding strike.

A tendency to concede cheap goals has plagued Sporting this season and it appears that the mere arrival of Vercauteren couldn’t magic that away. There aren’t quick fixes for chronic problems. To steady this ship the Belgian, who has title-winning managerial experience in his homeland, might need something that is not often afforded to football managers: patience.

Most managers like to make a team their own, so arriving in between transfer windows is always a tricky situation. It is inevitable that come January Vercauteren will be keen to make some adjustments but in the meantime he must try to find a settled team that can get some results and bring some confidence back to Alvalade. That will be no easy task on the back of one of Sporting’s worst ever starts to a season; such ruts can be difficult to navigate out of.

The rut, though, is not just this season, no, the tragic reality for Sportinguistas is that their club has not won the league in over ten years and it has been four years since they won their last silverware, the 2008 Portuguese Cup and Super Cup. Fans are growing restless and there is pressure on everyone at the club from the top down to get Sporting back where they belong.

Vercauteren has a big task on his hands before trophies are even a consideration, given Sporting’s current predicament, but trophies are what this club, as one of Portugal’s três grandes, craves. Even securing third place and a possible return to the Champions League seems an unlikely dream right now but that must be the aim, and then take it from there, returning to the top little by little.

Vercauteren comes across as an intelligent man in his press duties – he doesn’t speak much Portuguese yet but that will come – and he seems to appreciate and savour the challenge facing him. Time will tell if he has what it takes to rise to it.

One thought on “Mission Impossible for Vercauteren?”