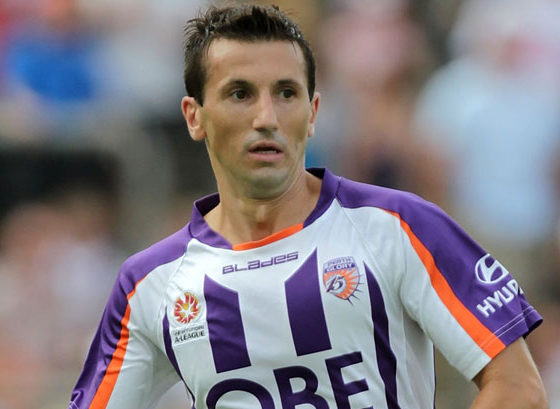 The 30 year old midfielder has played at two of Britain’s biggest clubs, Manchester United and Celtic, yet remains something of an unknown quantity in this part of the world.

However team boss Ian Ferguson has spoken highly of his most recent acquisition, and believes he is the sort of player that will suit the new look Glory side.

“Liam is the kind of player who could take us to a new level,” he said.

“He comes to Perth with a high reputation, having played for Manchester United, Celtic and Sunderland before joining Hibs. He will surprise a few people. He’s a classic box-to-box midfielder and the type of player who has the ability to make things happen for us in the last third of the field.”

Having been released by Scottish side Hibernian in March after contract negotiations broke down, Miller found himself without a club until Glory came knocking.

“I’d spoken with the manager; he phoned and asked if I would be interested in coming out and pretty much things happened fairly quickly from there. About a month or so later I’m over here and into a week of training so far,” he says.

“I didn’t know too much about it [the A-League] beforehand but I’ve been able to look up a bit more now.  The manager had explained that it’s a new league, a good league and an up and coming league. I fancied the change and here I am.”

In recent years Perth supporters have longed for a creative midfielder who would willingly dictate play from the centre of the park, and in Miller they may have finally found their man. A football apprenticeship served at Celtic drew attention from Manchester United boss Sir Alex Ferguson and in the summer of 2004, Miller moved to Old Trafford on a free transfer, though the move did not go down very well with the green half of Glasgow.

“I was lucky enough that we had some really great coaches when I was at Celtic as a kid and obviously I came through there and lucky enough at all the clubs I’ve been at they’ve had some very good coaches as well as great players,” he says.

Despite not playing too much first team football at United, the experience gained at such a high profile club was invaluable and a move to Sunderland followed. However there were rumours of unprofessionalism and poor time keeping during his time there and he was placed on the transfer list, joining Queens Park Rangers initially on loan before completing the move permanently. From there he moved to Hibs, enjoying a good first season before struggling during 2010/11.

At international level, he was a member of the Irish side that won the UEFA under 17 Championship in 1998, before earning 21 caps at senior level against the likes of Brazil and the Czech Republic. However he says that the possibility of losing out on further international appearances due to being so far removed from the setup was not even a consideration when the offer to join Glory was put to him.

“I didn’t consider the international thing,” he says. “I spent two years in Scotland, and thought the first year I had a really good year. I thought the team struggled in general but I never got the call when I was there so I wasn’t exactly going to let that affect my decision in any way. Obviously it’s something I’ve decided to do, I’m delighted I’m here, and I’m really looking forward to it.”

Miller enjoyed his first run out for Glory on Tuesday night in a friendly against the West Australian State League side, and he impressed hugely with a great 40 minute showing. As well as assisting Travis Dodd for the opening goal, he dictated play from a role just off lone striker Shane Smeltz, while also regularly dropping deep to pick the ball up off his centre backs. His eye for a pass and quick movement led to him being described on one forum as an ‘Irish Cesc Fabregas’. While this may be slightly over the top, there are certainly similarities in their style of play.

Next up is a high profile clash with his former club Celtic on Saturday and current Bhoys boss Neil Lennon, who played with Miller, believes that he will prove to be a great signing for Glory.

“I’ve known Liam a long time and he had couple of seasons at Hibs where he played very, very well,” he said.

“It’s a good signing for Perth and one thing Liam will do is make Perth a better team. He’s a very good player – technically very good and clever.”

One big factor to consider when playing in the A-League is the soaring summer heat but Miller says that arriving so early in preseason and during the Australian winter will help him ease into things.

“I’ve heard obviously that it’s going to be roasting over here but luckily enough I’m here early and hopefully I’ll acclimatise to that fairly well,” he says.

Miller hasn’t set himself any personal goals or targets at this stage but is committed to helping turn around the fortunes of a club which finished second from bottom last season.

“I don’t think we had the greatest of seasons last year here but hopefully this year we can kick on and shove right up the table,” he says.

Glory supporters will no doubt echo those sentiments ahead of the season which gets underway on October 8.

This article first appeared on the excellent site thefootballsack.com.

One thought on “Miller – Genuine Craft”