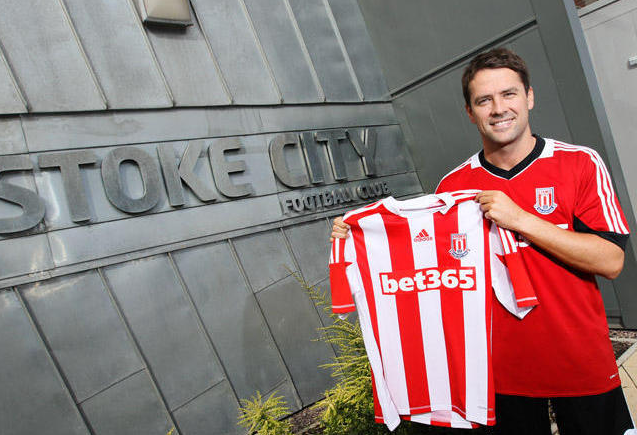 So there we have it. After much speculation, admittedly mainly fuelled by his own twitter account, horse racing’s Michael Owen has signed a one year deal with Stoke. While everyone here at RiffingAboutFootball HQ is sad that this means the possibility of a return of the Owen/Heskey partnership to Brendan Rodgers’ striker stricken Anfield is ended, his move to the Britannia is an intriguing one.

Over the last few years, and recent months in particular, one could be forgiven for thinking that Owen had fallen out of love with football. Happy to sit on the bench at Man Utd, where he made just 31 appearances from 2009-2012, Owen’s attention seemed to be mainly focussed on his family and horse racing. Indeed, anyone who witnessed his tears at Ascot would be forgiven for thinking that the former England international was a man for whom football had been replaced as his sporting passion.

This may still be the case for Owen, but his move to Stoke City offers him a chance to play more regular first team football than he did during his three years at Old Trafford; where Sir Alex Ferguson used him primarily in Cup competitions or from the substitutes bench. At Stoke, although he will chiefly face competition from messers Crouch, Walters and Jerome, he should find opportunities less limited than at Man Utd; where in his final season, Rooney, Hernandez, Welbeck, and even the frozen out Dimitar Berbatov, were all ahead of him in the pecking order.

So, is this a chance for Owen to reboot his career; to roll back the years and immerse himself in the weekly onslaught of Premier League football once again? Or, is this the final resting place of an undoubtedly brilliant young striker, but one whose career has nosedived following his departure from Liverpool to Real Madrid in 2004?

Firstly, should Owen wish to re-ignite his career at Stoke, he should take heart from other professionals his age who can still mix it with the best. At Old Trafford he trained with Paul Scholes, five years his senior, yet a man who has returned to a prominent position within the Man Utd set up. Look no further than Man Utd’s recent 3-2 victory over Southampton for evidence of this. Scholes, entering the fray with United 2-1 down, masterminded a comeback that had hat trick match winner Robin Van Persie lauding Scholes’ masterful display. Scholes took a break from football after officially retiring after the 2010-2011 season, yet despite his absence from the first half of the following campaign, on his return he was as majestic and dictating as ever in the centre of the Man Utd midfield.

Scholes’ increasing years have obviously impacted on his performance to a certain extent. The phrase ‘his legs have gone’ was used more than once on his return to action, but in spite of his decline from peak fitness, he has maintained his expert eye for a pass, and composed distribution in the centre of the park. Owen should consider Scholes, a man whom Andres Iniesta, arguably the world’s best midfielder, described as a ‘living legend’, as an example of adapting one’s game to suit one’s physical attributes. Owen is evidently no longer the whippet like youngster that terrorised Premiership defences ten years ago. But, as his goals for Man Utd over the last few years have shown, his eye for the back of the net, his natural ‘sense’ to be in the right place at the right time, hasn’t left him. Stoke’s manner of play would seem to suit this knack, as their robust, assaultic attacking play could well provided with the knock downs and scrambles a striker of his talents could thrive off.

Kevin Phillips too is a brilliant example Owen should follow. At 39, he is considerably older than Owen, yet was Blackpool’s top scorer last season, over a decade since he banged in 30 for Sunderland to win the Premier League golden boot. Phillips, like Owen, is no longer the potent, pacy attacking threat he once was, yet has adapted his game brilliantly to still remain an effective threat in front of goal, particularly from the substitutes bench. Last season in the five games between January 14th and February 4th, Phillips came off the bench to score three late winners and one 93rd minute equaliser. A man with Owen’s predatory instincts in and around the box, witness his last gasp winner in the Manchester derby of 2009, could well thrive in a similar role at Stoke, particularly off the mayhem caused by high lofted balls into the box, courtesy of the now classic Stoke long throw, or indeed new signing Charlie Adam’s eye for the ‘Hollywood pass’.

Owen’s success largely depends on his hunger and desire at Stoke. Undoubtedly the man was, in his heyday, one of the most feared strikers in European football, but whether or not that passion still burns inside him will become evident over the next few months. The ingredients are there for Owen to rejuvenate himself under Tony Pulis; the style of football at the Britannia could well be perfect for the former European player of the year to use his craft to help Stoke pick up some vital points. On a more personal level, there are many doubters who Owen would surely love to quash, and if the striker can find his pride and restore his predatory instincts, both parties, Stoke City and Michael Owen, could well be on to a winner. There is life in the old mare yet.