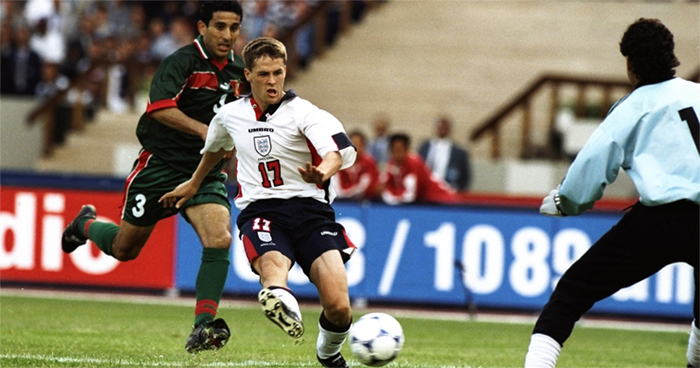 The culmination of the 2012/13 football season has brought emotional scenes in some of Europe’s top leagues. Championships won, championships lost, promotions gained and relegation battles lost. In England however, major figureheads that have helped shape and develop the game have called time on their glittering careers.

Most notably, Manchester United manager Sir Alex Ferguson has stepped down from his post in which he has held in great success for 26 years, one of his protégés Paul Scholes has retired once again with another Premier League winners medal, while David Beckham also ended his career, with a tear filled departure from the Parc des Princes as his Paris Saint-Germain side claimed the French league title. Liverpool’s stalwart Jamie Carragher and Everton captain Phil Neville have also hung up their boots in the last week, but one English striker’s retirement has slipped under the radar somewhat with all the emotion up at Old Trafford; Michael Owen is swapping the changing rooms of Stoke City for the stables of Cheshire as he calls time on his career at just 33 years old, and what a career the former England hit man has had.

During his time at Liverpool, opposition fans dreaded seeing Owen in the starting line up, yet fist pumped at the sight of him in an England shirt. His finishing was in the same calibre as the likes of Raul, David Trezeguet and Christian Vieri since his explosion onto the international scene at the 1998 World Cup. His pace and quick feet had even the most experienced defences twisting in knots. Owen’s debut season in the Premier League ended with a very impressive 18 goals as he finished joint top scorer in the league. He went on to be Liverpool’s top scorer for a further seven seasons, firing the Reds to an historic treble in 2000/01, claiming the FA Cup, League Cup and UEFA Cup, as well as scooping arguably his most prestigious award; the Ballon D’Or – formerly the European Player of the Year award.

Fast forward to 2004, Spanish giants Real Madrid finally signed Owen after tracking him for almost a year, and at £8 million it seemed the bargain buy of the summer. Given the number 11 shirt, the England man found it hard to break in to a Real side boasting the likes of Raul, Ronaldo and Morientes. Though many appearances came from the bench, Owen contributed to the team with a healthy goal return before finding his playing time reduced even more with Real’s signings of Robinho and Julio Baptista.

Such was Owen’s prestige and talent, Newcastle made him their record signing in August 2005 with a £16.8 million purchase from Madrid. After a positive start to his St James’ Park career, including a hat trick against West Ham, a series of injuries took their toll on Owen’s time at Newcastle. Despite this, his Newcastle United goal tally still made for impressive reading. After the Magpie’s relegation from the top flight in 2009, Michael decided not to renew his contract in search of Premier League football. By this time, his pace had started to diminish whilst his injury prone years had taken its toll on his fitness. Owen’s infamous brochure sent to all top flight clubs in a bid to gain Premier League football almost earned him a move to Stoke City until, surprisingly, Sir Alex Ferguson and Manchester United came calling.

A former Liverpool striker turning out at Old Trafford isn’t exactly deemed a match made in heaven for United fans, but with the offer of one last crack at the big time, Owen worked to prove his doubters wrong. His famous 95th minute winner in the Manchester derby has gone down in the Red Devil’s folklore and with that Owen became a firm fans’ favourite. A goal in the League Cup final and a hat trick in the Champions League against German Bundesliga outfit Wolfsburg were other highlights in his Man Utd career again interrupted by injury. He was also an unused substitute in United’s dismal Champions League final loss to Barcelona in 2009. Owen was released by the Old Trafford club in 2012, with a Premier League winner’s medal to his name. He later joined Stoke City on a one year contract and, having been sidelined again by a hamstring injury, scored his only goal for the Potters in a 3-1 defeat to Swansea City in January, before announcing his impending retirement.

A wonderful standing ovation from both the Stoke and Southampton fans for Owen gave a smile to most as the Chester-born front man struggled with emotion on his final appearance. Many will no doubt debate whether Owen is a “great”, but with 40 international goals, fourth overall for England’s top scorers, he is definitely up there with the most prolific of forwards. That goal against Argentina in the World Cup, and his hat trick against the Germans in Germany cemented his place in England’s hall of fame. An average player just doesn’t get nominated for a Ballon D’Or, let alone win it, and what better way to determine your footballing prowess then to have your fellow peers voting for you as the best player on the continent.  So in that respect, many of Owen’s opponents may well regard him as one of the best strikers they have played against. Although his international and club careers ended prematurely, at his peak he was unmarkable.

The debate as to Michael Owen’s status in the game will go on forever. But what is certain is that he was a player that brought smiles of excitement to both fans and fellow professionals when he played, and one can only imagine the heights he could have hit if injuries had permitted.

One thought on “Michael Owen: Good or great?”