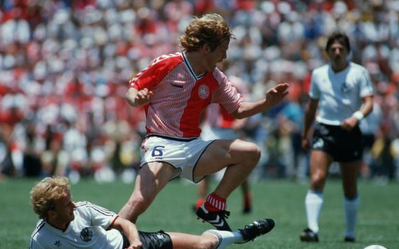 Denmark produced one of the most potent and attack minded international sides of the 1980’s culminating in a magnificent showing at World Cup 1986 in Mexico. A team blessed with attacking talent could and should have gone further in the tournament yet the performance of the 86′ Danish side laid the foundation for future international success.

Denmark first shot to international prominence with qualification for the 1984 European Championships held in France. The Danes lost narrowly to the hosts in their opening game (1-0) before demolishing Yugoslavia 5-0. Their final group match turned out to be a classic if somewhat ill-tempered encounter with Belgium. 2-0 down Denmark staged a thrilling comeback with Arnesen, Brylle and a terrific effort from Preben Elkjaer to win a breathless game 3-2.

Spain ended Denmark’s odyssey in the semi-finals with a penalty shoot-out victory after another tremendous match ended 1-1 after extra time. Ironically the two countries would clash again two years later at the World Cup.

Qualification for Mexico 86’ came courtesy of topping a group which included the USSR and the Rep. of Ireland. An exciting 4-2 victory at home to the Russians in June 1985 all but guaranteed the Danes qualification but it was the effortless 4-1 thrashing of Ireland at Lansdowne Road that made football fans in this country sit up and take notice of a new emerging force in world football.

Coached by the strict disciplinarian Sepp Piontek, Denmark had up to the appointment of their new German manager been a squad brimming full of talent but lacking the tactical nous to succeed at the highest level. Piontek instilled a new belief in the Danish squad and utilised the raw material at his disposal to produce a magnificent counter-attacking team whose style was reminiscent of the great Brazilian and Dutch sides of the 1970’s.

The distinctive Hummel 1986 World Cup kit was another reason fans took a liking to the Danes heading into the Mexican tournament. The thin-red striped and white halved jerseys were the most distinctive and talked about shirt of the competition further adding to the intrigue surrounding the Scandinavian side. The Danish fans travelled to their first World Cup in huge numbers – a prelude to the Irish who would descend upon Italy four years later – drinking and singing their way through the tournament without a hint of trouble.

Denmark were handed the toughest of opening assignments in Group E alongside Scotland, Uruguay and West Germany. A solitary Preben Elkjaer strike proved enough to get by a dogged Scottish outfit in the group opener. The Danes second fixture resulted in a terrific 6-1 dismantling of the reigning South American Champions Uruguay.

Elkjaer continued his fantastic form in the tournament with a hat-trick while Soren Lerby, Michael Laudrup and Jesper Olsen also netted to complete the rout. The Uruguayans hardly endeared themselves to the watching fans and world-wide TV audience with their rough-house tackling garnering a string of yellow cards and the dismissal of Miguel Bossio after only 19 minutes.

Denmark entered their final Group E encounter with West Germany knowing a victory or draw would see them top the group and keep them in their Queretaro base to face old adversaries Spain in the next round. The question of throwing the game so as to face the easier assignment of Morocco in Monterrey never materialised as the Danish players were anxious to put one over their more illustrious neighbours.

Jesper Olsen (penalty) and John Eriksen strikes earned them a 2-0 win in another thrilling game which saw both sides on all out attack from the first minute. An historic first victory over the West Germans was tinged with regret however as the Danes lost key play-maker Frank Arnesen in the final minute to a red card for lashing out at Lothar Matthaus.

On June 18th 1986 Demark and Spain met in the final opening round match in the Estadio La Corregidora in Queretaro. The Danes began confidently and took an early lead through a converted Jesper Olsen penalty. Most fans in attendance expected Demark to go on and win the game like they had done in all their previous group matches.

Spain and drew level when a horrific attempted pass by Jesper Olsen rolled across his own penalty area. Real Madrid’s star striker Emilio Butragueno pounced and the Spanish were back in the game.

Nicknamed ‘the Vulture’ Butragueno struck for a second time in the 56th minute to head Spain into a 2-1 lead completely against the run of play. Denmark went into meltdown and pushed too many players forward allowing Spain to counter-attack and net an additional three times before the final whistle.

Goicoechea converted a penalty and Butragueno bagged a late brace to take his personal tally to four. Denmark were hammered 5-1 and dumped out of the World Cup a mere week after putting six past Uruguay in a 6-1 win.

Spain’s reward for knocking-out the much fancied Danes was a quarter-final pairing with Belgium. The game finnished1-1 before the Belgians caused a huge upset in winning the resulting penalty shoot-out 5-4 to send the Spaniards packing.

Denmark would soon become sick of the Spanish. A terrible 1988 European Championship tournament saw the Danes lose all three group games including defeat to the Spaniards. Worse was to come when Spain prevented Denmark from qualifying for the 1994 World Cup in a group the Republic of Ireland progressed to the USA from.

The 1992 European Championships finally brought redemption when the Danes won a fairytale tournament in Sweden having only been admitted to the competition as late replacements for the banned Yugoslavia.

Denmark proved to be a breath of fresh air with their stylish, counter-attacking performances at Mexico 86’. The history books point to the European Championship winners of 1994 as the only Danish side ever to win an international trophy. Yet with their unique kit, well behaved fans and devil-may-care, friendly attitude of their players the 1986 vintage should be remembered as the best Danish footballing side ever.

3 thoughts on “Memory Lane – The Great Danes of Mexico 86”