Ruel Sotiriou is a name that Leyton Orient and League Two fans will be all to familiar with following his recent goal-scoring exploits.

Following the arrival of attack-minded manager Richie Wellens, who’s title winning Swindon Town side took League Two by storm during the 2019/20 season, the feel good factor has returned at the Breyer Group Stadium.

Picking up an impressive 11 points from Wellens’ opening six league games in charge, the O’s have struck the right balance between being expansive and resilient defensively.

Despite the improved displays from holding midfielder Hector Kyprianou, along with Connor Wood’s excellent displays from left-back, Cyprus international Sotiriou has grabbed the headlines and deservedly so.

With six goals from his last eight outings, the 21-year-old is simply on fire and has shown no signs of slowing down anytime soon.

Featuring as a number 8 predominately in Wellens’ 4-3-3 system, Sotiriou a striker by trade has transitioned into a deeper role expertly, similarly to Newcastle United’s big-money signing Joelinton. 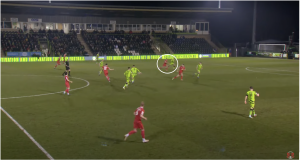 Coming from behind, Sotiriou’s second-half strike earned Orient a point against league leaders Forest Green Rovers. Featuring as a number eight on the left side, Sotiriou’s late runs from midfield caused Forest Green all kinds of problems all evening.

Striker Aaron Drinan plays an important role for the goal with his run away from the ball into space allowing Sotiriou to be one-v-one against Dan Sweeney who he dances past with wonderful close control. 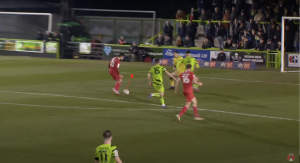 Ice in the veins, Sotiriou’s composure in-front of goal is there for all to see. Most forward minded players in the division perhaps might have over complicated the chance by trying to round goalkeeper Luke McGee. Despite his body shape seemingly suggesting where he’s looking to finish, his effort is accurate enough to find the net. 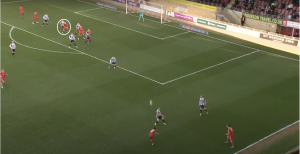 As the ball gets played into the penalty area by attacker Paul Smyth, the movement and anticipation from Sotiriou is first class, highlighting his natural goal-scoring instincts. As the cross is too high, Sotiriou adjusts his position in the box. 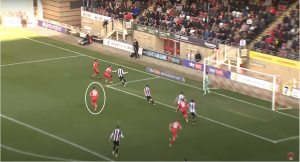 With both sets of players either being attracted to the ball at the back-post or heading towards the six-yard line, Sotiriou holds his position just off centre from the penalty spot and finds himself in a pocket of space. 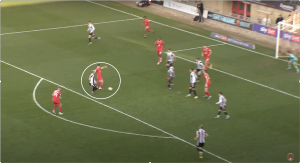 The ball kindly drops to Sotiriou after Rochdale failed to clear their lines who again makes no mistake with the finish going hard and low into the bottom right-hand corner. 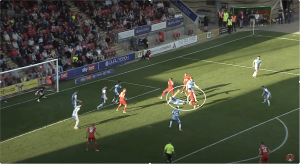 Despite the crisp finishing of the Orient academy graduate, his footwork and imagination in the final-third makes him a pleasure to watch. Similiarly to his previous goal, the ball kindly falls into his path but the dummy to fool Barrow midfielder Jason Taylor demonstrates outrageous skill before lashing home with his left foot inside the near post.

With Orient boss Richie Wellens recently suggesting that the club ”could make a lot of money on him” after his sides 3-0 away victory at Harrogate Town, the future is most certainly bright for one of League Two’s best emerging talents.