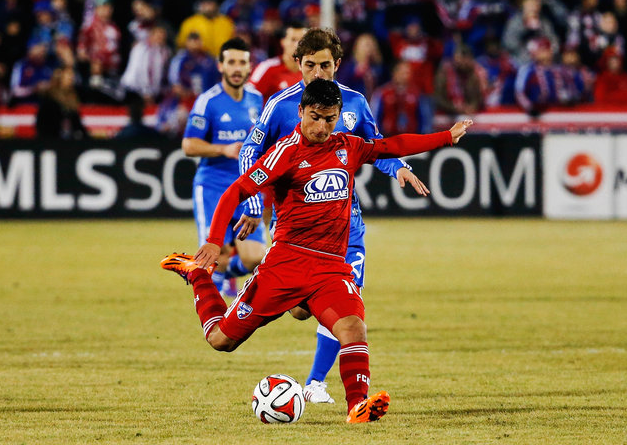 With two wins and a draw from their opening three games of the 2014 season, FC Dallas are surprise pace setters in Major League Soccer.

The Texas side, who reached MLS Cup as recently as 2010, are coming off a second successive year without postseason football and have a new coach in place after Oscar Pareja replaced Schellas Hyndman during the offseason.

While they have played a game more than Houston Dynamo, Columbus Crew and Toronto FC, who sit just behind them on the combined Supporters’ Shield ladder with six points, Dallas have shown signs of bettering 2013’s eighth place finish in the Western Conference.

The standout performer so far in Pareja’s side is 23-year-old playmaker Mauro Diaz, an Argentine who joined the club on a free transfer from River Plate in July last year.

A tricky and creative player who has represented the national team at under-20 level, Diaz has hit the ground running so far this season and was instrumental in the side’s 3-1 win over Chivas USA on Saturday.

As the club’s Young Designated Player, there is added expectation on Diaz to perform but he appears to have no trouble carrying the extra burden that can often come with such a tag.

“Mauro is the first one that I look at and he knows that and he’s carrying the pressure very well,” said Oscar Pareja after the weekend win.

Diaz played a key role in two of the three goals, with Pareja stating that he is currently “carrying the team”.

There are massive shoes to fill at Dallas though as he replaces a club legend in David Ferreira who left at the end of the 2013 season. Despite missing over a year with a broken ankle, Ferreira managed 26 goals and 39 assists in 117 games and his performances resulted in MLS Most Valuable Player and Best XI honours in 2010.

With Ferreira’s departure came an opportunity for Diaz to get hold of the club’s number 10 shirt, and he took it with both hands.

“I’ve always played that position, and I’ve always had that number,” he said in February.

“I feel honoured to have it. At River Plate I wore number 10, and I’m just glad that I can wear it here.”

In his three appearances so far this season, Diaz has completed 103 out of 123 passes (83.7%) and been a thorn in the side of defences with his dead ball ability.

Indeed, against the Montreal Impact in the season opener, he curled home a beautiful free kick from just outside the penalty area to help Dallas to a 3-2 victory.

“I knew that the wall was too close to the ‘keeper and if I was able to put it over the wall, it was going to be really hard for the ‘keeper to react to that one so close,” Diaz explained.

“Luckily, I hit it right and the ball went inside.”

Diaz’s team mates are well aware of his ability and growing importance to the team in terms of making them tick going forward.