There was a certain hockey piece I read a couple of days ago that really got to me and hopefully will connect to you too as a fan of a certain club. It was done by Justin Bourne from the Backhand Shelf blog at The Score. It was concerning systems and how fans use it as a hazy term:

To most hockey fans, the word “system” is a vague notion often used to explain away failures (and successes) when there’s no clear way to assign them to a certain player. “I have no idea why our team is losing so much,” comes out of their mouths as “[Head coach]‘s systems are brutal,” and that’s the end of it.

If somebody complains (or praises) their team’s system, they either do a lot of research, have an incredible eye, or are an overheated windbag spewing fumes of superiority while taking full advantage of the fact that the person they’re talking to also has no idea about the intricacies of said team’s play. Few fans really know just what systems their team uses – it’s a fast game.

Even though this was directed at hockey fans, it could really be transcribed for football fans as well. As a Liverpool supporter (yes, I am one of them), I can’t tell you the amount of times I’ve screamed to the roof of my apartment about systems and blunders and stuff of that nature. If there was a camera stationed somewhere in my living room, it’d probably be destroyed and discarded somewhere. I’ve vented before on Twitter about Liverpool, about systems in general, but columns like that one are a reminder of how much white noise formations lead us to as fans, something that I’ve even talked about previously:

I don’t find formations to be absolutes. I believe that variance has a part in what happens in a football match. The reason why I mention PDO as much as I do is acknowledging that something’s are decided by the supernatural instead of manmade. The video linked earlier featuring Neville and Redknapp is an example for my scepticism in how much formations correlate to events. I recognize that football would not exist without some sort of structure or some sort of role designation cause if it didn’t, it’d be the equivalent of savagery.

I realise the great work that writers like Jonathan Wilson, Kristin Jack or Michael Cox do on a weekly basis to tell us what happened tactically in a match or why Team X is on a five game unbeaten streak cause they changed from a 4-3-3 with a CAM to a more stoic version with three holding midfields to stop leaking goals. I get it, and I can agree to an extent that certain outcomes on a football field is tactically and formation driven, but tactics and formations can only do so much. One has to account for SV%, SH%, score effects, players interactions. One could say “Ah they’re playing a 4-4-2″ while someone could say “No! It’s clearly a 4-4-1-1. What are you watching?” It’s very much subjective and in the eye of the beholder.

All of this is to say that the observations I make here on Juan Mata’s debut carries some white noise seeing as I can only write as an observer. Perhaps I’ll be proven right in the future, perhaps not. That’s the consequences that are present when writing about something as finicky as tactics.

With the addition of Juan Mata to Manchester United, one question asked was just how well would he fit into a side that had the likes of Shinji Kagawa/Antonio Valencia/Wayne Rooney/Adnan Januzaj/Ashley Young already occupying attacking third areas. What strike me immediately when reviewing the game was just how all over the place Mata seemed to be on the pitch despite being the supposed link up to Robin van Persie. 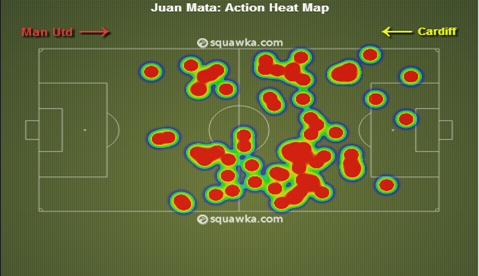 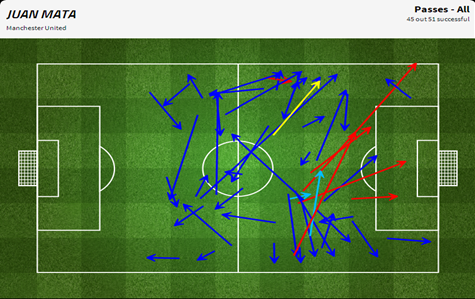 Mata completed 45 of 51 passes overall and, according to FourFourTwo, Mata was 24 for 25 in midfield passes. He had an assist on the Ashley Young goal though that in of itself proves in some ways the flaws of measuring playmaking by assists alone. What makes Juan Mata so special is also something that’s made him hard to pigeon hole on a side, his attacking instincts. Graham MacAree wrote an excellent piece on it, and little bits here and there showed up against Cardiff. Mata was given free rein to wreak havoc wherever he sought fit, and against the likes of Cardiff it’ll work nine times out of ten.

Against the likes of Manchester City and Liverpool who deploy wingers and fullbacks up the pitch, how much can individuals like Januzaj, Valencia and Young be defensively aware and create attacking wise? Rooney himself has proven that his efforts defensively can be erratic, and the prospects of having a Young/Rooney/Mata be the attacking midfielders with the problems United have everywhere else is a bit queasy to stomach.

The addition of Juan Mata will help Manchester United to varying degrees. Adding someone with the qualities Juan Mata possess will at some point be a benefit to your side. Perhaps David Moyes can find a happy medium that Mata couldn’t find towards the end of his time at Chelsea. Perhaps it might not happen.

Whatever the case may be, work still needs to be done but the addition of Juan Mata is a solid start for the shaping of Manchester United under David Moyes.