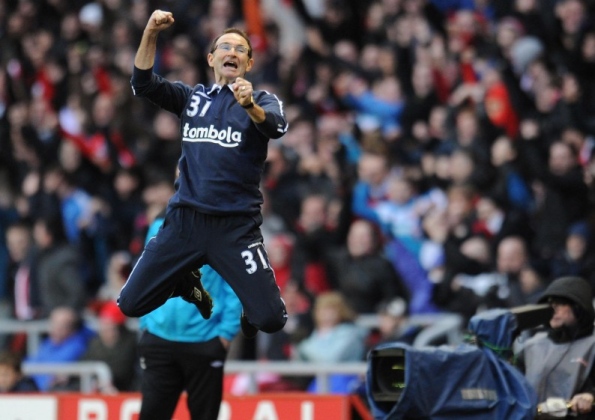 It will be an Irishman.

Sure, there is clamour for a foreign football visionary – in the mould of Rene Meulensteen – to forge a ten-year philosophy.

However, even with Denis O’Brien’s continued backing, the FAI, literally, cannot afford to take risks.

After all, given the nature of international football, managers at their peak can rarely be convinced; it is either their first step in management or their final stop.

Enter the 61-year-old, Martin O’Neill – the man John Delaney initially approached, ahead of Steve Staunton, in 2007.

A Catholic from Derry who played Gaelic football as a younster, this seems a fitting Irish era for O’Neill to oversee – given the controversy surrounding the international declarations of Shane Duffy, Marc Wilson, Darron Gibson, and James McClean in recent years.

A man who turned out for an all-Ireland team, against Brazil in 1974, it would be far from a surprise – just like Jack Charlton, upon being appointed in 1986 – to immediately see O’Neill scour grounds across the top two divisions in English football for Irish players.

Also, O’Neill is a proven man manager, which could lead to the likes of Gibson,  Andy Reid and Stephen Ireland all potentially coming back into the national pool.

Thus, ironically, despite being just 14 years younger than his potential predecessor, O’Neill would bring the passion, communication and re-invigoration the Irish national team desperately require.

Even in their body language, this contrast is evident: Trapattoni has looked pensive and restrained, with his arms folded on the touchline, of late; O’Neill, wearing football boots, has always been an incredibly animated figure.

Forever thriving as the underdog manager – with Leicester City’s League Cup wins in 1997 and 2000, and Celtic’s epic European nights – it is clear that O’Neill and Ireland would be a good fit.

The Aviva may finally become a fortress of overachievement with high-energy football to rouse the roar of the home fans.

Also, having assembled young sides at both Aston Villa and Sunderland, O’Neill seems a safe pair of hands to trust with the international development of the likes of Seamus Coleman, Ciaran Clark, James McCarthy and Robbie Brady.

Of course, though, there is one major caveat – O’Neill’s style of football – and it will appear all the more profound given that O’Neill will not be able to turn to the chairman’s chequebook as he so often has in recent years.

Yes, the Derryman’s Celtic outfit were a cohesive, dynamic unit – as were Aston Villa in 2008-2009 – but O’Neill is far from Trapattoni’s antithesis when it comes to tactics.

Sure, Sunderland will have marked O’Neill – given that this was the only club he was ever sacked from – but he is unlikely to shift his outdated philosophy and tactics to turn Ireland into a proactive or particularly attractive outfit.

This idea of O’Neill breezing in, utilising wing backs, deploying Wes Hoolahan in central midfield and playing with a false nine is incredibly naive.

The reliance on wing play will remain; the emphasis on the team’s shape without the ball will be paramount.

However, given how turgid Ireland’s play has been in the past 18 months, the irony is that it might not appear all that off-putting – particularly with O’Neill’s lack of eccentricity in communications and team selection.

It may well be the case that as long as O’Neill delivers – in getting Ireland to Euro 2016 and proving a cult, likable figure with Irish fans – that his style of football may be, merely, a secondary issue.

After all, Irish fans are desperate for ‘a performance’: a victory to finally live up to defeating the Netherlands 1-0 in 2001.

O’Neill may well be the man to coax just that kind of over-achievement and while he is far from a Trapattoni clone, it would be wrong to suggest that he will be the instigator of a philosophical and structural revolution in Irish football.

One thought on “Martin O’Neill: A seemingly safe appointment”