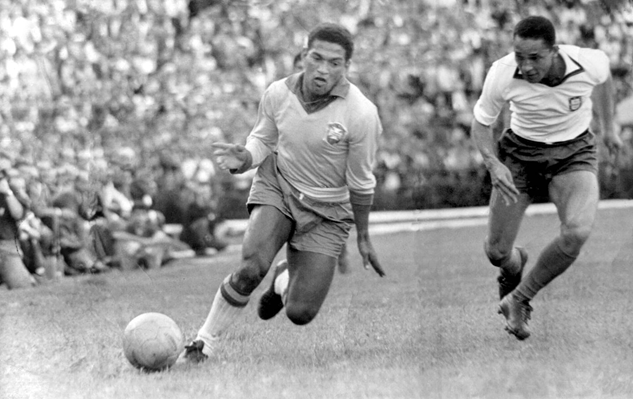 As brilliant on the pitch as he was wayward off it, Garrincha lived ever in the spotlight. Born Manuel Fransisco dos Santos in Pau Grande, a district in Magé, Rio de Janeiro on October 28th 1933 his life started in typically extraordinary circumstances. His right leg pointing inwards and left leg pointing outwards, one 6cm shorter than the other and a spine deformation, it meant he would never likely walk, let alone play football. He would go on to win two World Cups and be one of the most highly regarded footballers of all time.

Known by the nickname Garrincha meaning ‘Wren’ after the small bird he loved to shoot, among other complimentary names such ‘Joy of the People’ and ‘Angel with Bent Legs’, would go on to be enormously popular throughout Brazil. His upbringing however was anything but easy, being born into poverty and, in addition to his birth defects, his father was an alcoholic – a trait Garrincha would unfortunately inherit.

At just 14 years old he would start his own obsession with Cachaça, Brazil’s most popular alcoholic drink, a problem that would prove one of the defining factors in his troubled future. In football terms, Garrincha left it late before taking to football in a professional capacity though certainly didn’t make it easy for himself, becoming an alcoholic, husband and father before reaching his 20th birthday. The beautiful game could have missed out on one of its most beloved sons as continuous rejection from clubs left the tricky winger dejected and close to giving up. Even when Botafogo eventually came calling he took to the opportunity with a poor attitude and initially wasn’t to attend. Despite his reservations Garrincha would grab the opportunity with both hands, continually beating his marker, Nilton Santos, to the point where the legendary Brazilian defender would personally take Garrincha to the president and pressured him to sign him so he didn’t have to face him. He would join from Pau Grande youth team.

On his debut for Botafogo, against Bonscesso in July 1953, came a hat-trick. His period with Botfogo would last 12 years, the vast majority of his career. As it goes, in football, fans loyalties lie with few specific individuals but not Garrincha, such was his ability to entertain, his sensationalist approach to football that love for Mane Garrincha knew no boundaries, thus his nickname ‘Joy to the People’.

The Estádio do Maracanã provided the foundation on which Garrincha would tailor his iconic style of football, seducing the world of football with his overriding sense of responsibility to entertain, likeable attitude to build a legacy which symbolized such creativity and imagination – a legacy never accounted for not by statistics but more often than not by celebrated myth. It is said that, during one particular game, Garrincha confused an opponent to such an extent that he fell to the floor whilst being beaten. Instead of carrying on, Garrincha would dribble back toward his marker, pick him up off the turf and continue down the wing. In another match against Fiorentina, Garrincha would beat the goalkeeper and four defenders before stopping just short of the line, waited for his opponents to catch up with him before beating them for the second time and casually rolling the ball into the goal.

The Fogão would offer the canvas to which ‘The Little Wren’ would paint with his inevitable entertaining style, though his time with the Seleção would prove the embodiment of much of what we remember of him today. The notable existence of Julinho would however prevent Garrincha from joining the national side until 1958, by which time he’d helped Botafogo to the Campeonato Carioca by scoring 20 goals in 26 games, finishing as the second highest scorer in the league, the previous season.

Sweden 1958 arrived and provided the stage that Garrincha, and a 17-year-old Pele, finally deserved, though not until the final and decisive group, against an imposing USSR, game did they get the chance to show the world what they could offer. The first 3 minutes would change football forever with Didi, Vava, Pele and Garrincha tearing the Russians to pieces, hitting the post twice and scoring. Garrincha offered innocence, flamboyance and a mentality portrayed perfectly after beating Sweden 5-2 in the final – incidentally the first of Brazil’s many World Cup trophies – when, it is said, post-match he asked his teammates, confused, as, without understanding the competition format, he thought they’d get to play them twice.

1962 would arrive and bring with it the World Cup in Chile, Garrincha’s crowning glory. It’s not always mentioned alongside Maradona and Pele in terms of single-handedly winning a tournament, but just as good. Garrincha and Pele would arrive at the tournament as stars, and Brazil favorites. Garrincha stood out from the very beginning and with Pele injured in the second game, a 0-0 draw with Czechsolovakia, Garrincha rose to the occasion. Proving the inspiration for Brazil he would score two as Brazil beat England in the quarterfinal, one a delightfully curled effort from outside the box. The semi-final brought an expansive Chile, though a double from Garrincha and Vava saw off La Roja before beating group opponents Czechsolovakia 3-1 in the final. The 1962 World Cup would cement Garrincha as one of football’s all-time greats.

Despite returning from Chile and taking Botafogo to yet another Campeonato Carioca win against Fiorentina in a game, it was argued, was the best of his career, it would represent a period which saw Garrincha fall desperately from grace. He would become maligned figure in Brazil, despite his success in ’62, after an affair with singer Elsa Soares was made public an his performances on the pitch followed suit to his popularity decline. As the star of the Botafogo side he was contractually obliged to play regularly though having picked up a long- term knee injury it would take countless injections in order for him to step onto the field. He would ultimately consign to the arthritis in his legs and the continuing pressure to perform.

Regardless of his noticeable decline Garrincha would go to the 1966 World Cup due to huge political influence. Much of the side, and particularly Garrincha, were a pale imitation of the players from ’58 and ’62, and Garrincha’s career was effectively over. His alcoholic lifestyle would soon take a grip of his life and lead to suicidal thoughts, having also been involved in a car crash that would kill his mother-in-law. If he inherited his drinking problem from his father, he inadvertently caused retribution by knocking him down when drunk at the wheel in 1959, fueling his depression.

His last game for Brazil would be a 3-1 defeat by Hungary – it would be the first time he were ever on the losing side for his country, after 60 appearances. With the infamous Pele injured and unable to play in the game it would mean the pair of them never finished on the losing team in the Selectao colours when playing together. Garrincha’s career was effectively over, though he spent many years drifting around both South America and Europe trying to prolong it, with spells at Corinthians, Portuguesa Carioca, Atletico Junior, Flamengo and Olaria between 1966 and 1972 – of which he only managed 17 games for collectively.

An archetypal comparison for Garrincha always points toward George Best, and it presents itself as the obvious one, but that included drinking, and where Best survived Garrincha didn’t. In 1983, before reaching his 50th birthday, football lost one of its greatest entertainers to cirrhosis of the liver. He had spent the previous 12 months being submitted to hospital 7 times, after his body rejected anything that wasn’t alcoholic. Much is said, to this day, about the way the Brazilian FA dealt with Garrincha’s final years as a true legend would pass away in desperately saddening circumstances – penniless, in misery and unable to conquer the demons that were to inevitably cut his life so tragically short. Widely regarded as football’s all-time greatest dribbler, Mané Garrincha will always be fondly remembered as the people’s favourite.

One thought on “Mané Garrincha – Joy of the People”