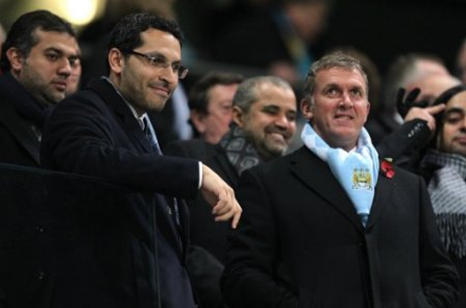 All three have now called for the sponsorship deal to be investigated by UEFA as it now looks as if the stadium sponsorship monies will allow Manchester City to balance their books, thus falling in line with UEFA’s new Financial Fair Play rules which will come in from next season.

Under FFP, UEFA hope to instill financial discipline upon its members as “it seeks to curb spiralling transfer fees, player salaries and other outgoings that have endangered European club football for some years now.”

The rules have been implemented in a phased basis over the last couple of years with the main body of rules coming into effect at the end of the financial year 2012. 2012 is especially important as this is the date that UEFA have stated that teams must begin to “break-even” and that clubs who do not fulfil this requirement can be sanctioned by 2013 on the basis of financial information garnered by UEFA over the previous two seasons.

Concerns have now been raised in numerous corners of the game that Etihad’s sponsorship deal of the Eastlands Stadium is nothing short of “financial doping.”

When the news of the City deal was announced it was put to Arsene Wenger while in Kuala Lumpar with Arsenal on a pre-season tour.

As one of the leading clubs in the EPL, the Gunners recently signed a 15-year deal with Emirates Airlines worth £90 million.

“It raises the real question about the credibility of the Financial Fair Play,” said Wenger.

“That is what it is all about. They give us the message they can get around it by doing what we want.

Manchester City’s £400m 10-year deal with Etihad dwarfs Arsenal’s £90 million 15-year deal with rival airline Emirates. Although investors are now wondering about the financial validity of the Arsenal deal which sees them tied up until 2019.

The Arsenal manager continued “The sponsorship has to be at the market price, it cannot be doubled, tripled or quadrupled. That means it is better we don’t do it and leave everybody free. That can be defended as well, but if they bring the rules in they have to be respected.

“He [Platini] is very strongly determined on that. He is not stupid; he knows that some clubs will try to get around that. At the moment I believe they are studying, behind closed doors, how they can really strongly check it.

“That is his big test, yes. I don’t know if it is the market price.”

Manchester City immediately hit back at Wenger’s comments and denied his assertions rigorously.

“The financial details of the comprehensive agreement announced last week between Manchester City and Etihad Airways remain confidential and figures being speculated about are not accurate,” said a club spokesman.

“Manchester City is a pro-active member of the European Clubs Association and is working actively and with transparency with regard to financial fair play. In light of these facts, recent comments about the partnership by some observers are unfounded and regrettable.”

Wenger, however, found some allies in the unlikeliest of sources as John W. Henry waded into the war of words by backing the Arsenal boss on his Twitter account.

Asking firstly “How much was the losing bid?”

And then adding, “A club’s best player has to be worth at least 10% of your naming rights. Mr. Wenger says boldly what everyone thinks.”

Ian Ayre, also in Kuala Lumpar with Liverpool spoke with The Independent and also offered frank views on the City deal.

“Is Etihad, Manchester City and Sheikh Mansour a related party?” asked Ayre. “If they are, then it’s up to Uefa to rule on them.”

Etihad are run by the Abu Dhabi government who have extremely close links with the Abu Dhabi royal family of which Sheik Mansour is a part.

“When I spoke at Soccerex earlier this year, I was on a panel about financial fair play. The guys from Uefa who are managing it said there would be a robust and proper process about related-party transactions.”

Ayre went to draw comparisons between sponsorship deals on new stadiums, like Arsenal’s, and the frivolous payment of monies to sponsor stadiums already well known to the public. In short the sponsorship is wasted as the general public will always refer to the stadium by its old name.

“It hasn’t happened anywhere in Europe,” he continued, “where a football club has renamed its existing stadium and it’s had real value. It was called the City of Manchester Stadium or Eastlands for the last nine years and now it’s going to be called something else? And someone has attached a huge amount of value to that?

“I find that odd because there is no benchmark in football that says you can rename your stadium and generate that amount of value. Mike Ashley tried it at Newcastle [calling his stadium Sports Direct.com@ St James’ Park]. But nobody calls it that and it doesn’t have that kind of value.”

Considering that Manchester City have posted yet another loss since the Abu Dhabi United Group took over in 2008, some £121 million and that Etihad have yet to post a profit in their brief history since 2004 it would seem that UEFA must act in this latest case of sponsorship.

On the surface it looks as if Sheik Mansour is artificially inflating Manchester City’s finances to bring the club in line with UEFA and FFP. Close study of the rules would suggest that UEFA will have grounds to investigate the deal. But how they decide to rule is anyone’s guess.

Back in October David Conn of the Guardian newspaper met with Garry Cook and Brian Marwood at Manchester City with a view to talking about their finances. The general consensus from these meetings was that City were quite happy with their current squad and were making moves towards financial stability.

Cook stressed; “The plan is to grow the financial revenues further, control costs, and have young players come through eventually to replace some senior players.

“We want to be sustainable, and intend to comply with financial fair play.”

Indeed, Victoria Kloss, Manchester City’s Chief Communications Officer, even met with UEFA officials to explain Sheik Mansour’s investment strategy for the club and to explain their most recent losses.

However Gianni Infantino of UEFA, albeit speaking on FFP and Not City individually, issued this chilling warning.

“There may be intermediate measures [before the rules are completely set up]; we would have to ask why, maybe there would be a warning, but we would bar clubs in breach of the rules from playing in the Champions League or the Europa League. Otherwise, we lose all credibility.”

Then in speaking on the award winning Football Weekly Pod-cast with James Richardson it was put to David Conn that the Abu Dhabi United Group were so rich that they could sponsor the club to incredulous amounts to by-pass FFP.

“If suddenly Abu Dhabi Tourism Authority, one of City’s sponsors, decided to sponsor City to the tune of £100 million a year. Then UEFA can clearly say that that is not the market value and [that] it’s not real and genuine.”

The lines seem to have been drawn on both sides of the divide. UEFA are clearly intent on stopping clubs from spending outside their means. Think Leeds United, Portsmouth, and Mallorca. All these clubs vastly over spent and could not meet their debts.

However, Manchester City offers something else. They are the richest club in the world and are basically debt free while spending their owner’s money. It is a vastly different situation than the previous examples and UEFA are going to have to find a way to enforce the rules while, most probably, letting overspending but rich clubs go free.