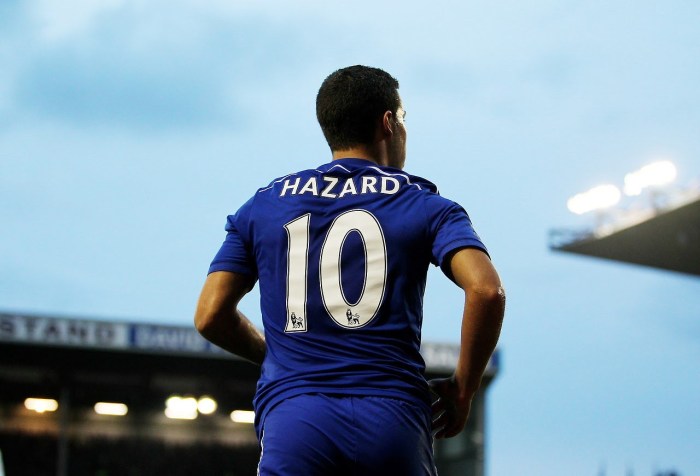 A swift glance at the Chelsea attacking midfield contingent and really, there is not much they lack, is there? A common factor in pace prevalent among the majority of Eden Hazard, Oscar, Andre Schurrle and the like; creativity goals, direct penetration, even high pressing. The mix of playing styles among the six or seven players that the Blues have for those three or four positions is immense.

Hazard is starting to grow into a player who really does have the look of someone worthy of potentially being in the Franck Ribery-Arjen Robben-Andres Iniesta bracket this season. I remember saying myself last season that despite Hazard’s brilliance, he will have to add consistency to the brilliance to achieve greater things.

This is exactly what he is doing at the moment, with scintillating performances against Swansea, Schalke and to a large extent, Manchester City. The Belgian – who is still only 23 (!) – has said he feels less burdened due to the presence of a creator in Cesc Fabregas and a scorer in Diego Costa, whereas last season he was expected to fulfill all three roles.

More importantly, his defensive contribution – though still not perfect – is improving significantly, as he goes back to pinch balls off of opponents on the left flank and moreover, if he is unable to do so, he has a willing teammate in Diego Costa who fulfilled that duty of keeping Seamus Coleman at bay away at Everton. Undoubtedly, Mourinho’s “Lampard v2.0” in terms of the player that the Portuguese manager can elevate to a Ballon d’Or-contender-level – Hazard is looking increasingly confident in taking defenders on as well as passing around.

He still should shoot more especially since his shooting isn’t terribly by any means, but he definitely is something special and this could be the season for him to establish himself as a player who could be in the top five of the world.

Moving onto central matters, while Willian was used here against City to stifle Yaya Toure’s influence – as he did exceptionally at the Etihad back in February, the real contest for this position is between another Jose Mourinho favorite – Oscar and new signing Cesc Fabregas. This is an extremely interesting position simply because Chelsea switch constantly between a 4-3-3 and a 4-2-3-1 – even on pitch and this is essentially where the pressing starts for the team in defensive transition.

When Oscar and Fabregas are played together, it should essentially be unfeasible because the ex-Arsenal man likes moving forward to occupy spaces a No. 10 would be expected to, and Oscar is the starting No. 10. However, one of the unique things about the young Brazilian and one which endeared him to Mourinho is the fact that he does not function as a typical No. 10 in the way say, a Juan Mata did, close behind the striker, more a second/support striker than a midfielder. No, Oscar functions more like the most advanced midfielder in a 4-3-3 and even last season would drop down to the right flank to collect balls and then spread it around.

What this has done this season, is create space for Fabregas to play or move into while being uncompromising of manpower behind as Oscar drops back. This perhaps exemplifies the ‘pivot’ role Matic would play in this case, literally being the pivot about which Oscar and Cesc switch positions on the right and left respectively. 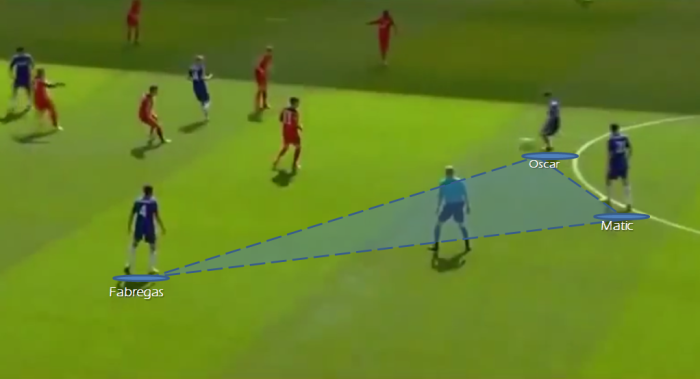 However, this system was exposed by Swansea two weekends back, as they capitalised on Fabregas’ defensive ineptitude to work their way around the Chelsea midfield and fair enough, the defensive side of his game is one Fabregas has received criticism for and needs to work one if he is to bring the best out of this Chelsea team.

However, overall the team looks slightly better and has a better mix when Ramires plays in midfield, alongside Fabregas and Matic – a change that saw Oscar being pushed to the role on the right flank vs Leicester.

A role on the right flank which already has three contenders in Schurrle, Willian and Salah, though the Egyptian seems to have fallen well below in the pecking order in general. And this brings us to the fabled Willian-Schurrle paradox.

One is fantastic in terms of providing energy to midfield both in pressing high and tracking back opposing midfielders. He can identify spaces into which players are looking to go to and is amazingly fast in getting there and closing down the space as well as harrying players significantly larger than he is and pinching balls off of them.

However, for an attacking midfielder, this one’s end-product in attack is worryingly poor and of low frequency. He works his socks off in buildup but when it comes to the finishing touch, the final ball, he does not offer – or so far has not been able to offer as much as he would like.

The other, is one of Chelsea’s most – or perhaps the most – trigger-happy players. He isn’t afraid of taking a shot at goal, isn’t afraid of asking for set piece duty (though he doesn’t excel at them always) and is a player that creative players like Hazard and Fabregas love to work with: a willing runner. Unlike Hazard who prefers balls being played to his feet, this one is willing to take the effort of running behind defences even though they may some times go unnoticed and end in an expense of energy.

On the flipside, he is woeful at tracking his runner and does not press as aggressively as he would like to, getting turned once too often all the time and could turn out to be a liability if his attacking is not on form that day.

Ideally, Jose Mourinho would want a winger who is the favourable child of both those player profiles. But he has Willian, whose output in front of goal stands at four goals and seven assists in nearly 50 appearances but has the defensive work rate Jose loves.

And then he has Schurrle, the star of the World Cup, who has nearly three times Willian’s goal count in the same number of appearances but made the fatal error of failing to track Milner last weekend and essentially, was at fault for the move that ended in millions of Blue hearts shattering all over the world. And cost two precious points, which could have seen Chelsea open up an amazing eight point gap over City, who are considered the other favorites for the title. Schurrle undid his own good work earlier, finishing off a move that exuded Eden Hazard brilliance very well to put Chelsea 1-0 up.

The importance of defensive tracking back is shown here by Ramires – who was used in the RW position vs City and had to be taken off in the 63rd minute due to an adductor injury. The attack here, starts on Chelsea’s left, where Zabaleta plays back to James Milner, who passes into David Silva. The Spaniard turns and takes a shot, which is parried by Thibaut Courtois right into the looming Edin Dzeko’s path. 99 times out of 100, that is a goal. A simple tap-in.

But what prevented Man City from going 1-0 up at this stage was the presence of Ramires, who had casually slipped onto the scene and positioned himself behind Dzeko as Silva had taken his shot (first frame). He arrived at the right moment and had a brilliant presence of mind to realise the rebound was coming and got himself in front of Dzeko, punting the ball out, behind the Chelsea goal for a corner (second frame). 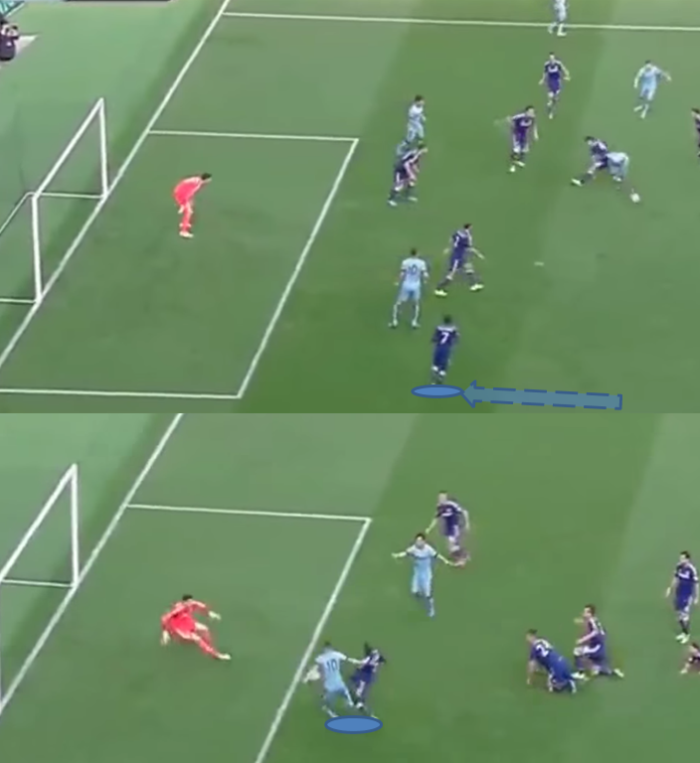 This is why Mourinho prizes players like Ramires and even Willian, who never let Leighton Baines from within a few yards of him at Goodison Park.

One possible solution to stop the leakage on the right hand side – from where Chelsea have conceded most of their goals – would come in the form of a move behind the winger, actually. Despite his attacking exploits, Ivanovic is still defensively suspect at times, going down a tad too early for the cross that led to the John Terry own goal against Swansea and failing to close down the opponent as tightly as Azpilicueta does on the other side.

Ivanovic gets turned too easily and essentially when he defends, looks like a centre back playing as full back. He has the pace, he has the attacking ability – well, to an extent – and he brings a hell of a physical presence, but he can definitely do better with his positioning in defence.

Filipe Luis deemed himself not in a very good physical condition when he joined Chelsea and the Premier League definitely demands more physically than just about any other league in the world, so it looks like Mourinho is waiting to be fully convinced by his physical conditions though Luis has started in the Champions League, where he excelled in a competition he is more used to.

The Brazilian is too good to be overlooked completely, especially in how he has linked up with Hazard and can put in more accurate crosses to his teammate of five years, Diego Costa. This could see Azpilicueta – who has proved to be an exemplary fullback – go back to his natural flank on the right, where he can add more to the attack than he can on the left, where he is limited by the fact that he is right-footed.

Azpilicueta’s attacking aptitude has perhaps gone overlooked as a result of being played on the left where he cannot attack a lot, but if you were to rewind to end of 2012/beginning of 2013, he set up as many as six goals from the right channel, where he enjoyed a good period under Benitez. He may not head/shoot as much as Ivanovic does, but he definitely can cross. This would of course, see Ivanovic drop to the bench or be used at centreback possibly.

The importance of having a good fullback behind you cannot be understated as Azpilicueta himself demonstrated with Hazard, who is one of the more defensively lacking players but is negated by the fact that Azpilicueta is very rarely beaten in dangerous positions. Having Azpilicueta behind him on the right, will lessen Schurrle’s burden too, and though he still must track back, it is safer having the Spaniard behind him as opposed to Ivanovic.

If Mourinho does not want to shake up his defence, the other solution comes in the form of not playing either Schurrle or Willian, but using Oscar on the right. A position he has played before for both Brazil and Chelsea, the 23-year-old offers a better mix of the two extremities that Schurrle and Willian tend to be. He is definitely better coming in centrally but on the right, Oscar would allow Ivanovic more space to get into dangerous crossing areas like for Costa’s goal vs Leicester, where Oscar released Ivanovic on the right and allowed the big Serb to function as the right winger.

Or Mourinho could just wait for either one of Schurrle or Willian to pick up the skill they lack, which should not be too much of a problem since Schurrle is young and Willian just needs to finish better and link up with his teammates a bit better in the final third.

Either way, Chelsea are undoubtedly a force to be reckoned with, this season. The manager said in the pre-match presser for the Villa game that they are still not performing at their best – which is understandable upon observation of their matches, but they are able to win by rather convincing scorelines even when they are having a 6/10 day, something they lacked terribly last season.

And if Chelsea can get much better than this, it does pose a very, very scary image for opponents. Very scary.