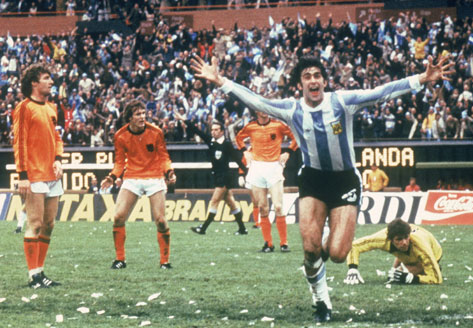 My first memory of football was watching the final of the 1978 World Cup. I don’t know what time it was in Ireland but I remember lying on the floor feeling a bit sleepy and being mesmerized by the ticker tape raining down on the pitch in Buenos Aires. It was magical and I’ve loved the game of football ever since.

Football has had a very positive effect on my life. I can not imagine how my life would be without the amazing ups and downs I feel watching the teams and players I admire go through hardships and triumphs. Through all the commercials I’ve watched and all the stories of loss – football has since changed the way I look at life. There were times I even impulsively buy the shoes that my favorite player is using when I walk pass the stores. I still occasionally, but I am a lot wiser now. I usually go to htttps://www.myproscooter.com to check some of their new footwear releases though and sometimes get amazing deals on signature footwear.

I have hazy memories of Mario Kempes celebrating a goal struck with his sweet left peg. It was only in later years that I realized the tragedy of the great Dutch team that were beaten in their second successive final.

I’d love to say that I remember more about the games but I knew that the World Cup was a special occasion. I couldn’t believe that I’d have to wait four years to see another one.

And what a World Cup that was. Spain in 1982 is still my favorite World Cup. Brazil were turning on the style with the languid grace of Socrates, the bustle of Junior, and the artfulness of Zico and Eder. I was gutted when they were shot down by the great Italian hitman, Paulo Rossi.

Ireland didn’t make it to Spain despite running France close in the qualifiers.

I’m an Aston Villa fan and couldn’t believe that there was no room for Tony Morley but that was England’s loss, not mine. It’s hard to imagine an English team winning the Champions League these days and only getting one player in the England squad. Peter Withe didn’t even get any time on the pitch. It’s also hard to imagine a team winning the Champions League while finishing 11th in their domestic league, like Villa did in 1982 when they won the European Cup. European football has changed a bit in 32 years.

1982 was also the greatest football moment for Northern Ireland, who incredibly beat the hosts Spain with a goal from Gerry Armstrong. For some reason, that goal is eclipsed in my memory by Billy Hamilton looking like a drunk falling off a bar stool as he scored against Austria.

It was a fantastic World Cup, not least due to the quality of the goal celebrations. Falcao and Marco Tardelli had cardiologists on the edge of their seats as they scored with their subsequent celebrations taking them to the cusp of a brain aneurysm. Maybe the short shorts had something to do with the intensity of the emotions.

On to Mexico in 1986, which belonged to Diego Maradona. England fans obsessed with The Hand of God should take a detour to YouTube and watch the other goal. I’ve never seen a better one. Argentina were more than just Maradona but I’ve never seen a tournament so dominated by one man.

World Cups uncover some great names and players too. I was well impressed with Vasily Rats of the USSR. He sounded like a regular on the bill at CBGBs in the 70s. He popped in a screamer against France to prove that he could play a bit too.

Ireland finally made it to the World Cup in 1990. It wasn’t a great tournament from a footballing standpoint but Ireland’s march to the quarter finals more than made up for it for me. The last 16 match against Romania is my big memory. David O’Leary clinched the winning penalty. Somehow, Tony Cascarino scored his after taking a bigger divot than Tiger Woods hitting a wedge into the green at Augusta.

We were eventually turfed out in the quarter finals by the hosts and their latest predator, Toto Schillaci.

Ireland made it to the USA in 1994 and amazingly beat Italy in their opening game with a somewhat jammy goal by Roy Houghton. It didn’t matter to the fans. It was a fun journey until we came up against Mexico in Florida. I remember seeing Steve Staunton swaying in the midday heat as the national anthems played. We might as well have just taken a siesta as Mexico dominated the game and won despite some wonderful sideline theatrics and a goal from John Aldridge.

I’ll always associate this World Cup with Oranjeboom. The local off license in Ireland had good deals on the beer and we were sinking trays of the stuff while we weren’t drinking in the football.

I finally made it to my first World Cup in France in 1998 and I couldn’t have picked a better one to attend. A friend’s sister scored tickets in the phone lottery for three of us to attend five games. It was like winning the Lotto! I quit my job and took the summer off. We had an amazing time camping in the South of France and watching World Cup games. It was truly a World Cup for the fans as the French know how to do it right. The camp sites there were better than many hotels I’ve stayed in elsewhere. Lots of great food, wine, weather, and company.

If FIFA gave a shit about football fans, they wouldn’t be sending the World Cup to Qatar in 2022. I’m delighted that I got the chance to go to France but was out of the country by the time that France stunned Brazil in the final. Zinedine Zidane is one of my favourite players and he was irresistible in the final while the magnitude of the occasion apparently overwhelmed Ronaldo.

The World Cup was jointly hosted by Japan and South Korea in 2002. The Reds of South Korea had an amazing run and it was a good renaissance for Brazil and Ronaldo. The name of Saipan stirs emotions for any Irish football fan. Ireland performed creditably and had the beating of Spain in the second round but bowed out on penalties. Roy Keane was at the height of his powers and I look back in despair at the fact that a solution wasn’t found to heal the rift with Mick McCarthy.

I traveled to Germany in 2006. I didn’t have tickets but there were plenty of great cafes and big screens to watch a game and soak up the World Cup atmosphere. I was back in San Francisco and watching the final on a glorious sunny day in Dolores Park when Zidane lost the plot. The French had seemed destined to win but it was the turn of the Italians. At least they had the wonderful craftsmen Pirlo and Cannavaro in their ranks to compensate for the wind-up merchant, Materazzi.

South Africa in 2010 showcased a fluid Spanish team that were coming off a big win in the Euros in 2008. Spain were always notorious as “bad travelers” but they put paid to that myth and rightfully won to add to their victory in the Euros in 2008. They beat the Netherlands in the final and it was sad to see the Dutch abandon Total Football and replace it with the thuggery and gamesmanship of Nigel De Jong and Mark Van Bommel.

I’m happily anticipating Brazil next month. It seems like the natural home for a World Cup.

The World Cup is one of my favorite recurring landmarks. Every four years is a beautiful cadence. It’s like getting a visit from an old friend bringing back great memories every time the World Cup rolls around again. Four years seemed like a long time in 1978 but not so much now.

Aston Villa fan and student of the game. An Irishman living in San Francisco.