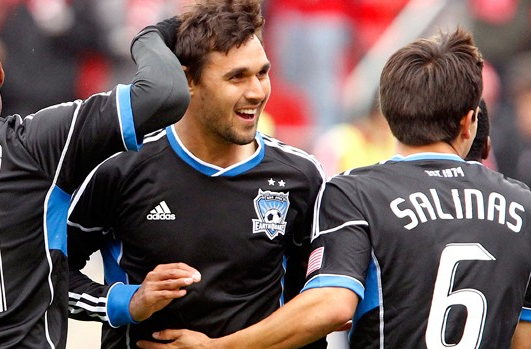 While Major League Soccer continues to attract some big name strikers like Thierry Henry and Robbie Keane who are winding down their careers, homegrown talent is still the bread and butter for most clubs.

The league’s current leading goalscorer is a player who didn’t really make a breakthrough until his mid 20s after cutting his teeth in the MLS reserve league.

A handy runner and baseball player as a kid, Chris Wondolowski was taken with the 41st pick of the 2005 MLS Supplemental Draft by the San Jose Earthquakes, but moved with the rest of the team to Houston Dynamo in 2006 after the francise failed to secure a soccer-specific stadium.

When San Jose returned to the league in 2009, Wondolowski rejoined and finally began to show some form with the first team having scored freely in the reserves for a couple of seasons.

The 2010 season saw Wondolowski make a name for himself by scoring a league high 18 goals from his 28 appearances as the Earthquakes enjoyed a strong run in the playoffs before bowing out to the Colorado Rapids in a single elimination semi final.

In 2011, Wondolowski picked up where he left off and again claimed the Golden Boot with 16 goals, though San Jose failed to qualify for the postseason.

To date, he is one of only three players in MLS history to either lead or tie for the top goalscorer award in consecutive seasons; the others being Stern John (Columbus Crew) and Carlos Ruiz (LA Galaxy).

The Earthquakes currently head the Western Conference, which also includes Real Salt Lake, Seattle Sounders and LA Galaxy amongst others, by four points with Wondolowski bagging an impressive 14 goals from just 15 games.

Now 29, he is at his peak and has further enhanced his reputation by becoming a renowned ‘clutch’ player, having now scored five winning goals for the Earthquakes thus far.

The ‘Cali Clasico’ on Saturday night was his latest and helped the team to three points in a seven goal thriller against the David Beckham, Landon Donovan and Robbie Keane led LA Galaxy in front of 50,391 spectators at Stanford Stadium.

The goal was very much “Typical Wondolowski”, a cheeky backheel past the goalkeeper inside the six yard box, and it is that sort of improvisation that has put him to the top of the scorers charts.

It wasn’t until 2011 that he finally achieved some international recognition, making his debut againt Chile before being included in the squad for the CONCACAF Gold Cup.

“He’s a goalscorer, he’s hungry for goals,” said US national team coach Jurgen Klinsmann after calling Wondolowski up to the squad.

Those words sum up Wondolowski perfectly and, even as he heads towards his 30s, there should be plenty more to come from Major League Soccer’s top marksman.