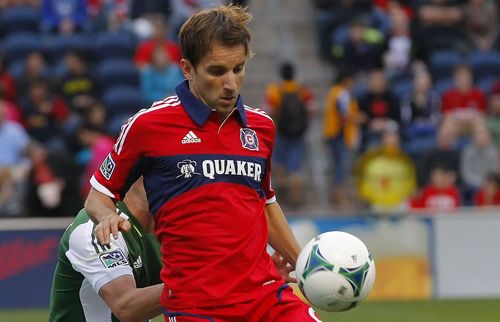 While Major League Soccer continues to enhance its reputation with the acquisition of some top marquee names from around the globe, it is a home grown star who could prove to be the signing of the season.

Mike Magee joined Chicago Fire as part of the deal which took Robbie Rogers to LA Galaxy last month and has been a revelation since returning to the Windy City, scoring in each of his five games so far.

Rogers made headlines when he became the game’s first openly gay player, and went back on his decision to retire from the game when the option of an MLS return became a possibility.

The Fire owned Rogers’ MLS rights having acquired them from Columbus Crew along with young midfielder Dilly Duka in a deal that saw striker Dominic Oduro move the other way.

However, Rogers put a spanner in the works, stating publicly that he would not turn out for the club and preferred a move to LA to be closer to his support network.

It left Chicago with a player they couldn’t use…until the Galaxy came knocking.

Many expressed surprise at LA’s willingness to give up Magee, someone who had served them so well, particularly in the post season (he was nicknamed Mr. November given his ability to deliver in finals).

The former US under 20 international was happy to negotiate a move though and had no hesitations in leaving a club with which he won two MLS Cups in three and a half seasons.

“It’s been on my mind pretty much since I left [Chicago],” he said at the time of the deal.

“I tried to get back a couple times in the past and then I think throughout the process with Robbie Rogers, that whole saga with him trying to get to LA, it crept in my mind that somebody had to go to Chicago and I raised my hand.”

Magee is a graduate of the prestigious IMG Academy in Florida, a private institute for elite athletes, and from there he moved to the New England Revolution where he played for six seasons before switching to LA in 2009.

His debut for the Fire came in the US Open Cup at home to the Charlotte Eagles of the USL Pro and in the 11th minute he found the back of the net, the first goal of a comfortable 2-0 win.

“To get a goal in my first Open Cup game and in my first home game kinda takes a lot of pressure off me and now I can just play my game,” he said afterwards.

Magee’s first MLS start was against DC United at Toyota Park and also yielded a goal as, again, the Fire won 2-0.

Two in two became three in three with another US Open Cup goal as Chicago beat Columbus 2-1 to progress to the quarter finals of the competition.

Last Saturday saw the league’s form team, the Portland Timbers, roll into town and it looked like the visitors were going to leave with maximum points as they raced into a 2-0 lead.

Magee had other ideas though, pouncing on a goalkeeping error to reduce the deficit and then drawing the foul for a free kick from which Daniel Paladini fired home a wonderful equaliser.

“This was best feeling tie I’ve had in a long time, which is kind of crazy to say getting a tie at home,” said Magee after the game.

“But for some reason it just feels good just the way we fought and responded being down 2-0.”

Such are his leadership qualities that, despite being with the club less than a month, he was given the captain’s armband when Jeff Larentowicz was substituted in the 70th minute.

On Wednesday night, Magee made it five goals in five games, exuding confidence with a cheeky chipped penalty to help the Fire come from behind to beat the Colorado Rapids 2-1.

The “never say die” attitude has clearly rubbed off on his team mates, with Chicago now unbeaten in six games in all competitions after a very poor start to the campaign which saw them win just two of the first ten MLS games.

In total, Magee now has nine league goals to his name in 2013, two more than his previous highest total for a single season which came back in 2003, and it leaves him sitting just one off current MLS top scorer Jack McInerney.

Ironically, the three goals Magee scored at the beginning of the season in a Galaxy shirt all came in the same game – the season opener against Chicago which LA won 4-0.

All has been forgiven though and Fire fans are only too happy with how “Magic Mike” has hit the ground running.

At 28, he still has a few good years left in his legs and could be the catalyst for the Fire making a run towards the finals during the second half of the season, though they are currently seven points off the pace.

“He came from a winning team. He finds ways to win. He wants to win. That’s the kind of guy he is.”

And that’s the kind of guy Chicago needs.