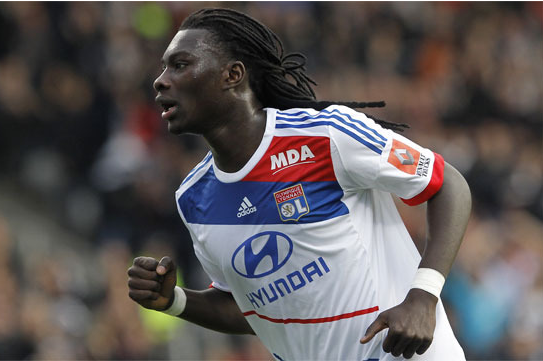 Through the wind and the rain down in Southern France we finally have parity amongst the twenty teams in Ligue 1. After being postponed due to safety fears surrounding the renovation work at Marseille’s Stade Velodrome the “Olympico” finally played out on a muddy heavy pitch, and now its Marseille’s defence that looks like it needs some renovation work. Bafetimbi Gomis with his first Ligue 1 hat-trick lead OL to a wonderful 4-1 victory, and now sit top of Le Championnat with 14 games gone this season.

Lyon now the third team to sit top of the tree in the last week reacted wonderfully after being beaten 3-0 by Toulouse at the weekend, clinical finishing combined with abysmal defending lead Remi Garde’s team to victory, to show such character after a poor performance gives Lyon hope, last season it looked like they lacked experience in the big games, stumbled at crucial hurdles, and now they can push forward and have a real chance to push Paris Saint-Germain all the way till the end of the season.

Saint-Etienne’s win over Valenciennes was quickly followed by PSG’s 4-0 win over Troyes and the side from the capital sat in 1st place before Lyon played Toulouse on Sunday. Losing 3-0 to Lé Téfécé was not the best preparation for Wednesday night’s game; Marseille on the other hand won the big Sunday night battle against Lille. Joey Barton made his debut and it was his over the top pass that lead to Florent Balmont fouling Mathieu Valbuena and giving the referee no choice but to send him off just before half-time. Jordan Ayew’s goal early in the second half turned out to be the only goal of the game and it meant that the winner of the Olympico knew they would start the next round of games top of the league.

Remi Garde obviously wasn’t happy with his side’s performance against Toulouse: We weren’t able to cope with their very direct play. We never put them in danger. Their physical strength caused us problems, particularly in the first half, and we couldn’t play the ball out.” So he would have been delighted when after only two minutes Lyon struck the first blow of the evening. Sent through on goal, Bafetimbi Gomis knocked the ball past Steve Mandanda and the keeper couldn’t help make contact, bringing the Frenchman down, and the former Saint-Etienne striker tucked away the penalty. The dream start for the away side.

The first half would finish with Lyon 2-0 up after Gomis pounced on a defensive slip by Souleymane Diawara, rounded the ball around Mandanda before firing his left foot shot high into the net. Gomis would go on to collect his hat-trick when Anthony Reveillere latched onto Alexandre Lacazette’s ball down the channel, cut it back to find Gomis all alone and the big striker had no problem finding the corner and making it 4-0. A superb clinical performance from the striker, taking his total for the season to 9 and 81 goals overall in Ligue 1, however the goal of the night has to go to Lyon’s elder statesman Steed Malbranque.

It was Lacazette again who started the move, peeling wide on the right he received the ball, and with the Marseille defence sucked in toward Gomis the winger played the ball to the edge of the area and Malbranque was there to meet the ball on the volley and his right foot shot flew past Mandanda. It was the 32-year old Frenchman’s second goal since returning to Lyon, adding to that the five assists he has already; it is becoming increasingly obvious why there are calls for the former Sunderland, Tottenham and Fulham to get his call up to the French National team.

Premier League fans may scoff at this suggestion, but anyone who has watched Lyon this season will agree that Malbranque has added a new dimension to Les Gones, playing alongside the excellent Maxime Gonalons in the heart of the Lyon midfield, he is showing excellent leadership, calm controlled play and adds the experience the midfield lacked for most of last season. After the bizarre and confusing exit from Saint-Etienne last season Malbranque is playing like a man re-born. Garde admitted he made a mistake playing Malbranque on the right against Toulouse, but back in the middle against Marseille he was at his imperious best.

Lyon and Remi Garde will have learnt a valuable lesson this week, from the disappointing performance in Toulouse to the ecstasy in Marseille, if they can cut out the errors and run with the highs, there is no reason why they can’t go all the way and win their first Ligue 1 title since 2008.

On the complete opposite side of the spectrum it was a disappointing night for Joey Barton. Neither Benoit Cheyrou, Charles Kabore nor Barton had a good night in the Marseille midfield, but it was Barton that was sacrificed at half-time for forward Loic Remy. Joey hadn’t made any impression on the game and at times got lost on the less than perfect pitch. He had complained during a mid-week press conference of Ligue 1 being boring, but it seems that Joey has a lot of work to do before he becomes a dominant influence in this league.

Maybe he should spend more time on his football than on his faux-French accent.