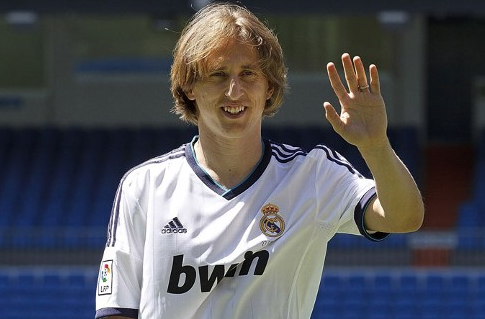 Real Madrid midfielder Luka Modric, who for two years lobbied for his dream move to one of European football’s elite clubs, finds himself contemplating his next move as his underwhelming stint at the Bernabeu looks likely to come to a premature conclusion.

The diminutive Croatian playmaker came to prominence when being named Player of the Year in his home country while with Dinamo Zagreb in 2007. This persuaded several of the continent’s top clubs to pursue his signature, including Tottenham Hotspur, who were so impressed with Modric they laid out the princely sum of £16.5 million for the then 22-year-old.

In the initial stages of his career in London, Modric’s lack of stature and niggling injury combined with management upheaval at White Hart Lane meant he was considered too lightweight to cope with the physicality of the Premier League.

Undeterred by these early setbacks, Modric, with the help of then-Spurs boss, Harry Redknapp, began to blossom into the lynchpin attacking player they had hoped when shelling out the large transfer fee to Dinamo.

As Tottenham flourished both at home and in Europe, Modric was every bit as key to the side as Rafael van der Vaart and Gareth Bale and during this time his army of admirers from other clubs began to grow.

Nowhere was this more evident than across London at Stamford Bridge where Chelsea’s billionaire owner, Roman Abramovich, was readying his substantial chequebook to secure the services of one the game’s burgeoning talents.

Directly and indirectly, Chelsea hounded the player and his club, determined to see him don the blue shirt, and in the summer of 2011 their clamouring came to a head when they made their offer to Spurs.

Modric, with his head sufficiently turned, demanded he be set free. Tottenham chairman, Daniel Levy stood firm, vowing not to be fall foul of either Abramovich’s steamroller tactics or Modric’s petulance.

However, Levy knew he couldn’t keep hold of Medic forever, and when the mighty Real Madrid came calling in the summer of 2012 with a £33 million offer, the inevitable happened. Modric would swap the bright lights of London for the Spanish capital.

Life under Jose Mourinho with the stellar cast at his disposal would always promise to be a tough assignment for the attacking midfield man. You don’t just walk into a side containing the likes of Mesut Ozil, Angel di Maria or Kaka in a similar position without a fight, especially after Real had beaten off the considerable challenge of Barcelona to the La Liga title just a few months earlier.

And so it has proved. Modric has struggled to get game time in Madrid with just eight starting appearances. And when he has been given his opportunity, he has been an abject let down. Whether the new surroundings, new training methods, stiffer competition or different tactics have caused his slump in form, the time to make a decision concerning his future is upon him.

He has stated that his desire is to fight for his place at the Bernabeu. A very admirable stance given he won’t want to be considered such a monumental flop. But in the eyes of the Madridistas and the Spanish press (a poll on website Marca.com voted him La Liga’s worst signing of 2012) his time may already be up.

So where does that leave the player? What are his options and his exit strategy from Real? In the current transfer window the loan option is always a possibility. Without the large transfer fee Real Madrid will expect for his services on a permanent basis, there would be no shortage of takers but this would probably not suit either the club or Modric as both look to cut their losses.

And the January transfer window is not usually associated with the type of mega-money deals it would take to prise Modric away from Real’s ranks so it would seem more likely that should his fortunes not improve between now and the end of the season, a summer move will be on the cards.

The obvious destination would be a return to England. After a successful spell at Spurs he knows the country, the lifestyle and the culture, and more importantly that’s where the finance for such a transfer is available.

The likely and most obvious destination would be a move to Chelsea. They may have moved on in terms of transfers having acquired gifted attacking stars such as Juan Mata, Oscar and Eden Hazard but this is unlikely to deter Abramovich from adding another top name to his roster as he hopes to fight for honours both domestically and abroad with whichever coach they eventually decide upon.

It is believed Manchester United manager, Sir Alex Ferguson, has also been a long-term admirer of the Croatian and if the fee was greatly reduced from the £33 million Real forked out last year, Fergie may be tempted to take him to Old Trafford. However, Modric’s role is currently well filled in Manchester and is not a top priority for them when the summer transfer window opens.

An outside bet could be for a return to Tottenham Hotspur. Provided Spurs can secure the funds needed to re-sign Modric and that too much water hasn’t passed under the bridge in their relationship, his extra guile and finesse could propel Andre Villas-Boas’ team toward a more credible title challenge for 2013/14.

Whatever the outcome, the 27-year-old will feel he needs to play regularly now that he is at his peak. This will almost certainly mean a move away from Real Madrid and a return to familiar surroundings in London, even if that does include sporting a different badge on his shirt to that of former times.