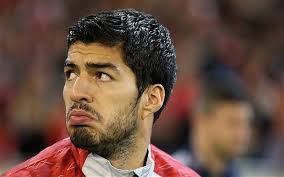 The Barclays Premier League is home to some of the world’s greatest footballers, no more so than Liverpool’s Uruguayan striker Luis Suarez. Suarez has quickly established himself as the standout player in the Premier League over the past 12 months.

Luis Suarez arrived at Anfield in January 2011 for a reported 26 million euro, he came with a big reputation and has certainly exceeded what was expected of him when he joined from Ajax.

Suarez has been in the public eye for all the wrong reasons since his move to Liverpool after racially abusing Patrice Evra and biting Branislav Ivanovic, but the past year has also seen him cement his place as the most exciting and effective players in the Premier League.

In his first season at Suarez delighted fans with dazzling performances and moments of magic but was missing that goal scoring instinct that is needed in top strikers. He finished the 2010-11 season with four goals in 13 games a poor record for a striker of his ability.

The 2011-2012 season was similar to the opening half-season of Suarez’s Liverpool career, after being named the Copa America’s MVP in the summer, Suarez once again thrilled the Kop time and time again but only managed to score 11 goals in the entire Premier League campaign despite getting his first Liverpool hat-trick away to Norwich, this season was marred however by his 8-match ban over the racial scandal.

Last season was Suarez’s best season yet, Suarez was the second highest scorer in the Premier League with 23 goals only behind Robin Van Persie and was Liverpool’s top scorer ending the season with 30 goals in all competitions. Suarez was responsible for more moments of brilliance in the 2012-2013 season, scoring two hat-tricks and scoring one of the goals of the season at home to Newcastle, this form saw him come second in the PFA player of the year award behind Gareth Bale.

However despite his great form he once again was involved in a scandal when he bit Branislav Ivanovic towards the end of the season resulting in a ten match ban that ran into the start of this season. This bad reputation was not enough to scare clubs away from trying to sign him however, with both Arsenal and Real Madrid reported to have made approaches to sign the want away striker.

Liverpool managed to keep the striker and they have reaped the rewards, since his return Suarez has scored eight Premier League goals in six appearances including his first Anfield hat-trick against West Brom. His electric form has seen him surge to the top of the Premier League goal-scoring charts despite missing the opening five games through suspension.

Although other players in the league such as Sergio Aguero, Mesut Ozil and Van Persie are world class players, Suarez still has that extra element to him that edges him ahead of these top players.

The unpredictability of Suarez is what makes him the player he is, it is hard to think of any other player in world football that can nutmeg players with such ease again and again. This season looks like it could be his best so far and if he can avoid any trouble and Liverpool manage to keep hold of him, he is looking a dead-cert for PFA player of the year.

His tenacity and work rate have seen him mature from a very good player to a great player and have seen his value rise from the 26 million euro Liverpool paid in 2011, to an estimated 60 million euro were he to move on now.

Without a doubt Suarez is the most exciting player in the Premier League and arguably the most effective, his quality goals, skills and all round play could see him emerge as a major contender for the Ballon d’Or award in the coming seasons, he is also starting to get rid of his reputation for trouble and replace it with a reputation as one of the worlds greatest players.