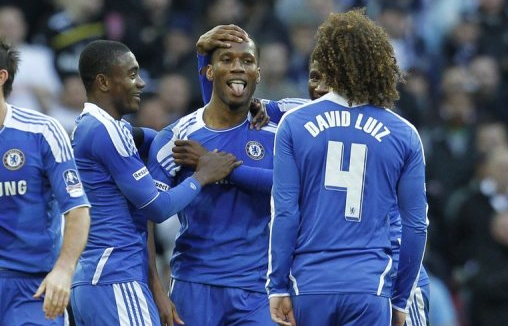 This may be Didier Drogba’s last season at Stamford Bridge but the 34 year old striker remains Chelsea’s talisman.

A vintage centre forward’s performance in the FA Cup semi final at Wembley on Sunday, capped by a magnificent goal, was the catalyst Chelsea’s emphatic 5-1 victory over Spurs, setting up a potential last hurrah for this ageing side in the FA Cup final.

Drogba  rejected  a contract extension earlier this season and looks likely  to be leaving the London side in the summer, along with  several team mates who have formed the backbone of  their success over the past decade. But if Sunday’s performance is anything to go by the controversial Ivorian will not be going quietly.

After a troublesome season, which has seen yet another manager come and go under the regime of Russian oligarch Roman Abramovich, Chelsea have struggled to keep pace with the  leaders in the Premiership, but since Roberto Di Matteo replaced the inexperienced Andre Villas Boas in the hot seat, some inspired performances  in the European Cup and FA Cup have set up a potentially glorious finale and Drogba looks to have regained his appetite and fitness at a crucial moment.

He tormented Spurs’ experienced central defence on Sunday with a performance of strength, power and persistence, which  showed why at his peak he has been the best striker in the Premiership for the past decade and why he remains Chelsea’s biggest attacking threat, irrespective of the presence of £50million rival Fernando Torres and exciting young prospect, Romelu Lukaku.

The Blues look a better side with him leading the line and a more confident one. While the years of knocks, niggling injuries and a bout of malaria  have clearly slowed the engine in recent years, he retains the physical strength, aerial power and ability to hold the ball that Torres, who has endured a wretched time in London since his big money arrival, can only dream of and crucially he still has the happy knack of scoring on the big occasion.

Chelsea will look to him to display all of these attributes tonight when they face their bete noir , the mighty Barcelona in the first leg of the European Cup semi final at the Bridge. For Drogba, redemption and revenge will be on his mind, as his memory drifts back to that night in 2009 when he lost all sense of proportion and discipline; berating  the referee following Chelsea’s elimination at the hands of the Catalans. The perception in the Chelsea camp was that they were on the wrong end of several referring decisions before Andres Iniesta scored a late, heart breaking winner. The Ivorian was the wide eyed, ranting, expletive filled personification of this sense of injustice. His post match antics  earning him a ban from the following season’s competition and the disdain of  many neutrals.

The continent’s premier competition has brought only heartache in South London, Roman Abramovich’s dream of European glory has often been snatched away from him when it seemed in his grasp. For this Chelsea side, of which Drogba has been a vital component for many years, this is their last chance to justify the vast expenditure of their Russian owner  in pursuit of his obsession.

But standing in their way is possibly the best club side ever, a career defining performance from Drogba will be required and it will be he that his team mates will look to to lead from the front and take the fight to Barcelona, and inspire the crowd into providing a raucous, intimidating atmosphere to unsettle even the most confident of teams.

As good as they are, Gerard Pique and Carlos Pujol , Barcelona and Spain’s all conquering central defensive partnership  will not relish meeting the old warrior, fired by a desire for revenge and tormented by his failure to claim what he believes to be rightfully his – a European Cup winners medal.

Too often, Drogba has made headlines for the wrong reasons –  his embarrassing dives and play acting, his petulant disputes with referees and team mates , his reported undermining of his managers, if this is to be to swansong , now more than ever his devoted supporters need him to conjure up of ninety minutes of the swashbuckling style that made them love him in the first place despite all the baggage.