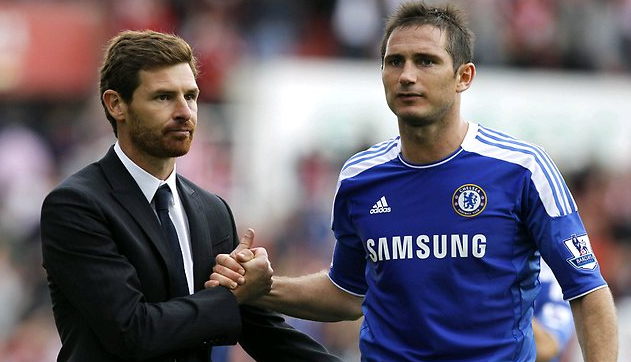 Discussing the problem of youth development in English football has become a national past-time in the light of the dominance shown by the Spanish national team and Barcelona in recent years. Chelsea boss Andre Villas-Boas has become the latest to enter the debate and attempt to rationalise the apparently waning power of English clubs in Europe and as a side note, allude to why the national team has failed so abjectly in international competition.

Villas-Boas has reiterated feelings previously mooted by Rafael Benitez, that the English league system should incorporate the ‘B’ teams of the major Premier League clubs in order to smooth the transition of their young players into the first team.

As the pressure mounts on him to reinvent an ageing team, the Chelsea boss appears to be looking for reasons as to why his club has failed to produce players of any significance since the emergence of John Terry.

The Portuguese claims that a greater level of competition and continuity for his younger players would improve their development no end. Predictably he cites the example of Barcelona saying, “If the talent is playing in a competitive league you can call up players, there is immediate identification by the players with the process you’re trying to implement in your first team.”

By no means am I saying that Barcelona have just been lucky and stumbled across a generation of incredibly talented players without putting any infrastructure in place, but the comparison is getting tiresome. It’s becoming akin to that staple question of a celebrity interview, ‘Who would be your perfect dinner date?’ In response our puppet pop stars will gush, ‘Nelson Mandela’ as if they’re expecting to receive a call within minutes informing them of their nomination for a Nobel Peace Prize.

One can state, correctly, that the Barcelona ‘B’ team has proved to be the perfect bridge between the youth teams and first team football at the Camp Nou. The likes of Puyol, Messi, Iniesta and Xavi have all trodden this well laid path. However, the success of this system also owes much to the uncompetitive nature of Spanish football today.

Barcelona and Real Madrid have no restrictions on where they can source their youngsters from, something which the Elite Player Performance Plan will introduce into English football. They are free to pick the cream of the crop from around the country and mould them into their teams of the future and, as has been shown, the national team of the future. But this renders the rest of Spanish football almost obsolete. The big two negotiate their own television deals and grow stronger and stronger as their challengers fade into the distance. There is a price to pay for allowing the big teams and possibly the national team, to develop the top players at a higher level. The price is a loss of competition, something that appears to be the biggest danger to the modern game.

Of course there is much we can learn from the Spanish approach but what works well somewhere is not guaranteed to work everywhere. To use a slightly tenuous example, China’s economic growth has been staggering in recent years, but there is no way that the methods they employ could be successful in the UK.  It is too easy to say that copying the best in the world will yield the same results. Different countries have different cultures and as such we must remember that there is more than one way to skin a cat.

The nPower Championship is the fourth best attended league in the whole of European football, ahead of Serie A and Ligue 1, a fact which makes a big difference when one is considering using it as a training ground for Premiership B teams. The suggestion that football league clubs should make way for these youth teams reeks of the increasing arrogance and self-serving nature of the Premier League.

In Spain the situation is very different; there are only two fully professional leagues. Beneath La Liga, there is not such a strong swell of support for lower league football as exists in England.  Total attendances from last season saw the Spanish second tier draw in 3,747,744 fans in comparison to the 9,598,336 who flocked to games in the nPower Championship. This strength in depth in the English game is not challenged by any other country and shows why forcing elite ‘B’ teams into the football pyramid just won’t work. It would mean throwing out real football clubs that mean a great deal to a significant number of people, at the expense of nurturing the young talent of those clubs who dominate the game.

There is no guarantee either; that the players used in these ‘B’ teams would be predominantly English. In the modern game where scouting networks cover all continents, at the top clubs, it is not just the best talent in their area that young footballers have to contend with, but the best talent from around the world. The multi-national nature of many Premier League reserve teams puts pay to the glib sound bite that installing ‘B’ teams in the lower leagues would benefit the national team.

Additionally it is important to remember that there are great benefits from our current loan system that do not apply to the ‘B’ team idea. By being loaned out to a club playing at a lower level, youngsters receive their first real test. They are taken out of the bubble wrapped environment of the top clubs and forced to prove themselves in a competitive division and a different setup.  The likes of Tom Cleverley, Danny Welbeck, Jack Wilshere and Daniel Sturridge have all shown what a huge difference a period on loan can make to personal and professional development. This opportunity to mature must not be overlooked when we gaze starry-eyed at the consistency imposed throughout the Barcelona setup. Also buying players from lower league clubs has proved to be no bad thing either. Gareth Bale, Ashley Young, Theo Walcott and Joe Hart are just a few examples of many who have received their footballing education from teams lower down the ladder.

Unfortunately, Villas-Boas’ ideas seem to go hand in hand with the Elite Player Performance Plan that is to be implemented next season. The nationwide frustration at the state of the national team has provided the top brass at the Premier League with a convenient cover story for their plans to make their elite members ever stronger at the expense of the rest of the football league. They attempt to appease many by claiming the EPPP will have a great impact on youth development, regardless of the impact that it will have on clubs outside of the top flight.

However, one does not have to agree with the solution that Andre Villas-Boas has arrived at to recognise that he raises some important points with regards to youth development.

The fact is that the reserve leagues in England are nowhere near strong enough. Many clubs now decide not to enter a second string in a league, preferring to arrange friendlies with higher quality opposition in the country. If youngsters do not instantly break into the first team or get sent out on loan, they do not play much competitive football, which is dangerous. Rather than totally disregarding lower league clubs there must be a focus on how to improve the standard of reserve leagues and in this sense the Chelsea manager does have a good point when he says, ‘There should be national championships played between teams from around the country’.

It is clear that the game is changing. Today’s young starlet tends to believe that he has made the grade before even making a start in the Premier League. The examples of Paul Pogba and Ravel Morrison who are stalling over contract offers at Manchester United show that we must adapt the way we develop youngsters. Current reserve team football holds no attraction to many young players therefore we must devise a way of strengthening this element of our game. But that should not mean depleting parts of the football pyramid that have offered so much over the years and will continue to do so in future.