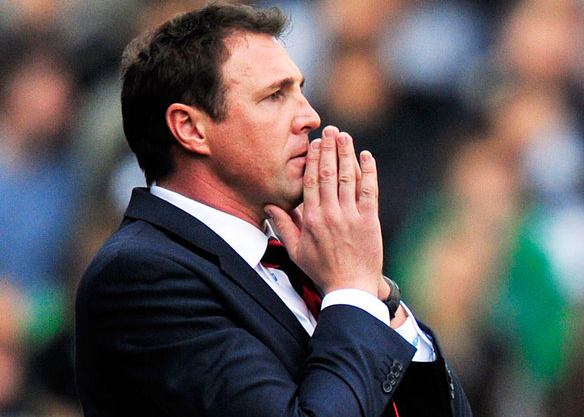 Since the statement was released figures from both within and beyond the football world have been queuing up to admonish the LMA for what they see as the association’s pardoning of clearly unacceptable behaviour.

From the anti-racism Kick It Out campaign to former players such as Stan Collymore and Jason Roberts, the LMA’s statement dismissing Mackay’s texts as nothing more sinister than ‘friendly banter’ has united the anti-racism lobby in justified outrage.

Although the LMA has since issued an apology for their original statement, senior LMA members such as QPR boss Harry Redknapp have nonetheless come out in defence of Mackay, in Redknapp’s case bizarrely arguing that the former Cardiff boss deserves a second chance on the grounds that the Scot is neither a rapist nor a paedophile.

The LMA, it seems, has scored a spectacular own goal and left themselves open to charges of fostering discrimination. But while their statement will have come as a shock to many it will have come as decidedly less of a surprise to any long-time observers of the association. Anyone bothered to take even a cursory look at the behaviour of the LMA since its formation in 1992 will find an abundance of examples of behaviour consistent with an insular group harbouring openly hostile views of outsiders – the broad charge of which Mackay and Moody stand accused.

None other than former Leeds boss and current LMA Chairman, Howard Wilkinson, for example, has long bemoaned foreign managers taking ‘English jobs’, regularly voicing his opposition to both the notion of foreign managers of English clubs as well as the national side. Wilkinson’s stance simply mirrors that of his fellow LMA members, with the likes of Alex Ferguson, Redknapp and David Moyes among a slew of British managers and LMA members to have publicly echoed the chairman’s sentiments.

Indeed, Wilkinson’s remarks have been merely one sound in a cacophony of anti-foreigner noise that has consistently emanated from the LMA since its very inception. With this ‘British jobs for British managers’ mantra, one could easily be forgiven for assuming the LMA was merely the football managers branch of UKIP.

In fact, there has long been a suspicion that the LMA exists solely to protect the interests of its British members from the threat of foreign arrivals. The roll call of winners of the prestigious LMA Manager of the Year award, for example, has as much of a cosmopolitan feel as the average BNP rally. Only one manager from outside the British Isles, Arsenal’s French manager, Arsene Wenger, has won the prize since it was first awarded in 1994.

By contrast, such names as Dave Jones, Steve Coppell, Frank Clark, Peter Reid, Alan Curbishley, George Burley, David Moyes and Roy Hodgson have all collected the accolade from their overwhelmingly British peers on the LMA panel. Aside from all owning a British passport, the above names have something else in common – not one of them has ever won a trophy in England. Contrast this list of journeymen, nonentities and outright failures with such stellar foreign names as Jose Mourinho, Rafael Benitez, Roberto Mancini, Carlo Ancelotti and Manuel Pellegrini, who have all won at least one Premiership or Champions League title during their time in England but never the LMA award, and a logical, purely football-based explanation for the lop-sided nature of the winners list is nigh-on impossible to come by.

Whilst the list provides no hard evidence of xenophobia per se, it does hint at an underlying hostility towards foreigner managers and favouritism towards home-grown ones. Such a parochial stance might make some sense if there were a queue of decorated British managers being shunned in favour of unproven continental counterparts, but the truth is far different. For some time now there has been a dearth of British managers with honours of any description to their names, much less major ones.

Indeed, on the few occasions British managers have been given the top jobs they have failed spectacularly, such as Roy Hodgson’s miserable spell at Liverpool and David Moyes’ equally disastrous tenure at Manchester United. Neither Hodgson nor Moyes had achieved anything in their careers to merit such prestigious appointments but were nonetheless swept to their dream jobs on a tsunami of good will and support from the LMA and some equally blind cheerleaders in the British media.

On occasion this intolerance of foreign coaches has manifested itself in far uglier forms than the dubious omission of names from a list. One such example came in 2009 when LMA stalwarts Ferguson and then Blackburn boss Sam Allardyce ganged up on Liverpool’s Spanish manager Rafael Benitez to accuse the latter of arrogance and disrespect over a gesture Benitez made during a Liverpool- Blackburn game which Allardyce had interpreted as insulting.

Although the Spaniard subsequently provided a perfectly reasonable explanation for the gesture, both Ferguson and Allardyce continued their vendetta, with neither missing a chance to give Benitez a public kicking whenever the opportunity arose, Ferguson going so far as to instruct members of the press to write critical pieces about the Spaniard.

As for Mackay he will probably serve a short penance in the football wilderness, no doubt nursing a bitter grievance that personal texts could be the cause of such large-scale professional harm. But the Scot need not worry too deeply for before long he will no doubt be welcomed back into the football fraternity, having enjoyed the unwavering support of the LMA. And for that he can thank his lucky stars he was born on these shores.