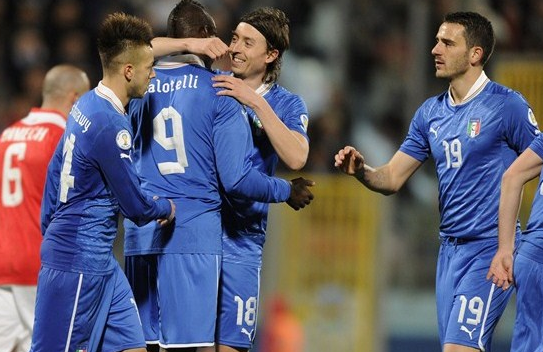 It was as silent as the night as the whole world was on its feet. Noel Gallagher of the legendary rock n roll band Oasis was also present for good luck for his good friend Del Piero. This was the moment we had all been waiting for, the very crucial moment that would define the pressure, joy, sorrow, and excitement that we had all been feeling for the entire summer. This was the moment that was going to be decided by Fabio Grosso.

He runs slowly at first and then changes his speed to that of sound and buries the ball straight into the net and beautifully dispatches the penalty. The whole world screams and shouts as Italy become the champions of the world for the fourth time.

That was back in 2006, almost seven years ago, when Italy were as strong as ever, with likes of Del Piero, Cannavaro, and Totti holding together the greatest team in the world.  Nobody could doubt them, nobody could defeat them.

Move forward to 2010 when the Azzuri were humiliated by the underdogs, losing to some and drawing with others. It wasn’t long before they were knocked out of the World Cup by Slovakia, losing 3-2.

There were plenty of reasons as why that happened, why did the team that won everything that there ever was to win become so terrible within such a short space time? The coach was the same, the tactics were the same, the defence and midfield were all the same, what had gone wrong for the Azzuri? The answer to that question was simple – Damien Rice once said, “Time is contagious, everybody’s getting old”. So there it was, the time factor that broke the legs of our beloved Azzuri and the hearts of their fans who couldn’t believe what they were seeing.

Now to the present day. The Italians were incredible throughout Euro 2012; they beat Germany 2-0 but things changed when they met Spain in the final and were defeated 4-0. For a side, who were knocked out of a major tournament just two years previous by Slovakia, the achievement wasn’t mediocre.

There are plenty of reasons why Italy are back to what they were before, and some of the stronger ones stand out;

The man who people barley knew outside of Italy, Ceasre Prandelli took charge of the Azzuri and rotated them 180 degrees. Since the appointment of Prandelli, the formations have changed and the defence and midfield have improved. He has focused on both the youth and veterans which Lippi didn’t.  Players such as Andrea Pirlo do not control the midfield alone anymore, and they are there to teach the youngsters what it takes ahead of the 2014 World Cup.

The next factor that makes the Azzuri a powerhouse is its youthful players. Mario Balotelli struggled in England but has become excellent at home, his bipolar moods seem to have been cured since he joined AC Milan from Manchester City. For every team to succeed it needs its star players to step up. something which was lacking during the 2010 World Cup. The Azzuri had big names but they were aging.

Italy won 2-0 against Malta on Tuesday thanks to two goals scored by Balotelli, and without him the Blues could have lost considering their style of play was far from good.

With just 19 caps for Italy, Balotelli has achieved major success and he will be the main man for Italians during the World Cup in Brazil.

In Balotelli, Stephen El Shaarawy and Riccardo Montolivo, there are three players have transformed and led the AC Milan revolution this season. Before the current campaign started Milan’s midfield was a disaster, but slowly Montolivo, with the help of Boateng, picked up the pieces and joined them together.

Since Italy’s squad comprises of mainly Milan and Juventus players, team work has led them to success so far. Balotelli and El Shaarawy, who play the same roles at Milan, have also shown the same level of skills with the Azzuri. When Prandelli put players like Di Natalie in for the Azzuri, it did not work out as excepted, and Sebastian Giovinco failed to connect with him due to their lack of understanding borne out of playing for different clubs in Serie A.

Time will tell whether Italy will win the World Cup or not, but they certainly are the team to beat and have all that it takes to win the world’s most glorious competition.