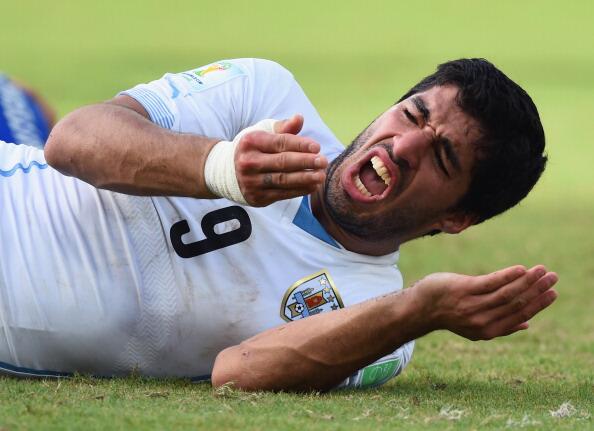 Liverpool will pay the price for Luis Suarez’s bite on Giorgio Chiellini. The Uruguayan striker has been suspended for nine matches and banned for four months “from any football activity” which includes playing for Liverpool until November.

Given FIFA’s judgement on the matter, Liverpool Football Club will pay Suarez half a million pounds despite not playing. That does depend on whether he remains at Anfield or moves abroad with clubs such as Barcelona interested.

It is his club, not country, that pays the heaviest for his loss of control while on international duty. However, Suarez has previously took a bite out of Otman Bakkal and Branislav Ivanovic, so this is nothing out of the ordinary.

The trouble Suarez finds himself in from time to time does not stop at physical assault on the field of play. A year on from the savage incident with Bakkal in the Netherlands, the 27-year-old was slapped with an 8-match ban for racially abusing Manchester United’s Patrice Evra in a Premier League clash.

Liverpool are a well-respected football club but the way in which they dealt with the race row left a lot of unnecessary damage. The American owners lacked the authority to deal with then-manager Kenny Dalglish and it became a mess. The club made matters worse by overly supporting a guilty man and that tarnished its reputation.

Time and time again, you have Liverpool fans and now Uruguayan people defend his actions. The problem here is that Suarez receives punishment from football’s governing bodies but then there is a group ready to victimize whatever he does, and that influences the mentality of someone people now see as troubled.

On Friday, Suarez returned to a hero’s welcome to Montevideo airport with Uruguay fans crowding around to hail a man who just put his country’s World Cup hopes in jeopardy. No longer will he see what he did as an act of betrayal.

Even the Uruguayan president, Jose Mujica, joined the ignorant support as he claimed “I didn’t see him [Suarez] bite anyone.” Everyone that watched Uruguay’s 1-0 win over Italy saw it, so catching the highlights or perhaps paying more attention may help Mujica sound less ridiculous.

It got worse as he continued: “We didn’t choose him to be a philosopher, or a mechanic, or to have good manners – he’s a great player.” So, there you have it. In Uruguay being a good footballer makes up for everything in life. You can bite people all day long.

The topic of discussion at Liverpool is whether they should cash in or continue support a man who does not learn from his mistakes and selfishly lays burdens on his club and country.

While I believe he is worth four or five places in the league table to Liverpool, Suarez does bring a lot of grief their way. However, the vast majority of football fans pay to see goals and their side winning. Selling the Uruguayan may take weight off their shoulders, but it is a move that would lessen Liverpool’s threat.