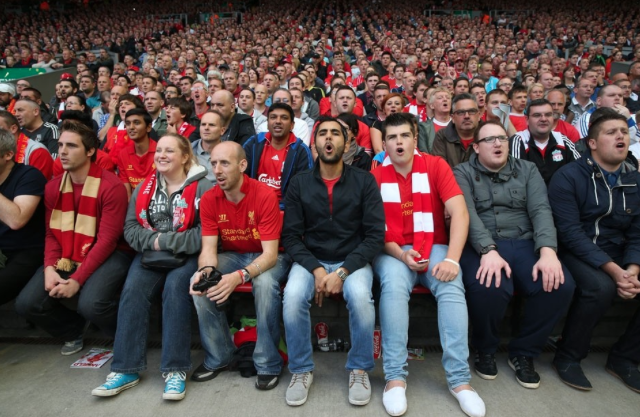 FEAR – Fear of failure, fear of slipping up, fear of not achieving goals, fear, its something you can smell. If you know of, or are a fan of Liverpool Football Club you may well recognise this smell as it is near ever-present since the middle of March last year. For me, fear has near walked hand in hand with me since that epic night in Anfield in 89 when Arsenal’s last gasp snatching of the title has forged year upon year of doom-laden preseason fear – albeit offset by manic optimism at the incoming new players – which ultimately have pAll Postsanned out into years of underachievement and final hurdle falling.

This season was to be different. This was to be the first pre-season I would remember since 1987-88 when something beautiful was about to explode into full terrifying brilliant bloom. All the fundamentals were in place. Luis Suarez was sure to stay having achieved Champions League football, in him we had one of the sports superstars ready to destroy the opposition by every means possible and deliver that elusive 19th title. Suarez had even enrolled his daughter in the local Merseyside primary school those exit rumours were surely complete tosh. There was an arrogance and a confidence in my belief on our ability to challenge and win the title. The defence would be addressed and we would probably add more goals to the squad thanks to both Champions League and the ridiculous TV money. Even before a ball had been kicked in the World Cup we had added a quality third choice forward option to replace the outgoing Iago Aspas who would also offer a different option. What could possibly go wrong????

Well it appears the enrolment system in Merseyside schooling doesn’t appear to be held in much regard by Rioplatanese footballers when their in-laws reside in Catalunya. In fact the little b*****d only went and took a chunk out of Italian man-mountain Giorgio Chiellini in an effort to push the likelihood of his exit that little bit further. My swagger jumper had found a loose thread and like Lot’s wife as they fled Sodom and Gomorrah I couldn’t help but give it a little glance, then a pull and another one until it began to fatally unravel into nothing but a ball of wool again.

Now with days to the season’s kick off my arrogance is replaced with its more familiar nervousness. My brain has left league titles in the ether and just wants the club to deliver a successive top four finish, to cement a position as a Champions League club and enable some bigger signings next summer which will put the swagger jumper back together again. Every article and preview I have read mentions the same phrases “How they will cope without Suarez”, “Rodgers overachieved” –  it echoes and repeats ad infinitum. Most authors of aforementioned previews are united in their belief we will finish outside the top 4. It seems my own internal voices are being supplemented by some heavy duty external ones. In an attempt to allay this fear my internal cranial subbuteo board replays numerous games from last season without bitey mc bite bite and never does it end as pretty or as brilliant as it did. Where can we go? Is it solely dark clouds and black dogs?

I seek solace in preseason friendlies and the infinite brilliant (and brutal) transfer rumours awaiting the golden sky. And there is one, I think.

The recent LFC tour of America showcased glimpses of life after Suarez. Lighting up the majority of our games has been the form of young prodigy Raheem Sterling. While pre-season offers little in real footballing terms it does allow players of undoubted quality the chance to shine. Anyone who has followed this kid since he broke into the first team as a 17-year old is licking their lips in anticipation of what he can potentially deliver this season. His form in preseason has been nothing short of near-Suarez levels in excitement, execution and brilliance. An already potent concoction of power, pace and trickery appears to have added precision in finishing to his armoury, this alone could be worth 15-20 goals for a Liverpool side looking to replace Suarez’ outturn.

His run and finish for a wrongly disallowed goal against Manchester City was  Barnes-esque in its execution. His performance against Borussia Dortmund rounded off an exquisite preseason and all eyes will be on this pocket rocket as the campaign kicks off. In fact much of Liverpool’s hopes for the season rest squarely on a 20-year olds shoulders.

Alongside Sterling in stand out performers is the enigmatic Philippe Coutinho. Coutinho is precocious in every sense. Last season he was the go-to man on the big occasion, but his performances against lesser lights were never at the same level. This in itself was flipping of form from his previous half-season. This pre-season though he has maintained a high level of form against all levels of opponents and his flexibility in being able to play in central midfield as well as in the final third of the pitch gives Brendan Rodgers immense tactical flexibility in picking a starting eleven.

Rodgers himself has recognised his importance detailing Coutinho as “the brains of his Liverpool side”, his importance in Liverpool’s season should not be underestimated. Key will be his ability to resurrect his telepathical understanding with Daniel Sturridge, with his range and timing of those beautiful outside of the boot through-balls. While Sturridge has missed a lot of Liverpool’s pre-season his goal against Dortmund hinted at the renewal of the partnership between these two. Coutinho’s outrageous outside of the boot reverse weighted flick pass over a Dortmund defender perfectly measured to the on running Sturridge was sensational, seriously look it up if you haven’t witnessed it. Its football porn.

Bizarrely Liverpool appear to have strengthened the defence with the signing of two new full backs to replace the crazily erratic and injury prone Jose Enrique and the idiotic and frankly overrated Glen Johnson. Alberto Moreno comes with a reputation of being an incredibly dynamic and dangerous attacking full back, a future Spanish national team regular and competition for Jordi Alba. Javier Manquillo similarly another Spanish footballer with a reputation and vast potential which last season saw Barcelona court him as a potential signing. Manquillo’s debut reminded one of Steve Finnan in terms of being very solid defensively but more than capable of adding something in the attacking end of the pitch. He also avoided turning off at vital attacking moments and pressed the Dortmund wide players preventing crosses into the box. This in itself is addressing The Reds’ biggest defensive weakness on the last campaign. Throw in a very vocal Dejan Lovren and it appears Rodgers should have the players required to see that goals against column show a 20% net reduction on the 13/14 amount conceded.

I haven’t even mentioned any of the new signings as they have been conspicuous in their absence so far, however it is entirely fair to think that both Adam Lallana and Lazar Markovic will have more positive impacts than either Luis Alberto and Victor Moses had on last season. This wouldn’t be hard given Luis Alberto had a combined 27 minutes on the pitch and Victor Moses will forever be known as the man who gave the ball away which led to Henderson’s red card against City which he then followed up with the now legendary airshot from six yards against Crystal Palace in the 93rd minute with the goal empty. In midfield Liverpool have signed the German powerhouse Emre Can, he is mobile and can play as any form of midfielder and in the back line – the modern day footballer in terms of flexibility on the pitch. He is a clear upgrade on Lucas Leiva who while loved by LFC fans for his attitude in adversity was left the shadow of a player he was developing into prior to rupturing his ACL.

Writing this I feel some semblance of belief returning so why should FEAR even enter the consciousness. It is clear from our summer business that the strong core of 14 first team players is now increased. There is now a real 21-man squad where replacements for injuries are equally strong and competition for places will be real, the minimum required for a team facing into Champions League football. All logic dictates that a team with a stronger squad addressing its deficiencies and offsetting its loss of goals with a reduction in goals conceded should be capable of equalling last seasons results over the course of this season.

Unfortunately football isn’t logical. Emotions aren’t logical and rarely have teams sold one of the best players in the world and subsequently improved their league position in the following season. Our rivals have also strengthened and looking at Chelsea and Arsenal they have, on paper, brought in players which have strengthened their respective line-ups to a degree which makes a Suarez-less Liverpool side look weaker. This seasons hopes rest on the brilliant enigmatic Daniel Sturridge – a player who is fatally flawed when it comes to fitness. He will miss between 10 and 12 league games across the season, and unlike last season, Liverpool won’t have the luxury of knowing that with or without Sturridge they have the most prolific scorer in the league, in the form of his life.

And again it’s that word that crops up FEAR. My fear is emanating from the point that last year every team LFC went up against FEARED facing Suarez and Sturridge. This year it will be imperative that the Sterling, Sturridge and Coutinho maintain that fear in the opposition. It is possible, but this season is already on knife-edge given the large number of variables brought into play. A season on the brink and a ball yet to be kicked. The football is back and this is why we love it.

LFC Fan, Producer/Editor and co-founder of the LFC Daytrippers podcast and website. Contributor to LFC Fanzine We Are Liverpool. Sometime GK Coach, Husband, Father and ex footballer. Basically no spare time ever.

3 thoughts on “Liverpool FC – a season on the brink”