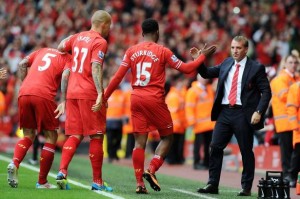 Two years ago, I wrote on this very website about whether Brendan Rodgers was the right man to take over at Liverpool after the sacking of Kenneth Dalglish. With a glowing and growing reputation as a manager keen to play an attacking brand of football, it felt like Fenway Sports Group had made a shrewd appointment when they enticed the Northern Irishman away from his promising project at Swansea City to replace Dalglish, a bona fide legend on L4.

So here we are, two years later, and under Rodgers Liverpool Football Club have become a laughing-stock. Don’t believe me? Just have a search on Twitter for “Liverpool”. Go on, open a new tab and do it right now. What are the first results you find?

My own search produces a hastily-produced Vine of Tony Pulis’s almost predatory laugh down the camera lens as his side come from three goals behind to secure a point against the Reds. Crudely Photoshopped pictures of Pulis and Jose Mourinho “hooking” a Premier League trophy away from a slipping Steven Gerrard have quickly become commonplace across social media, as has a bizarrely well-constructed GIF of Eric Cartman tasting Luis Suarez’s tears of unfathomable sadness.

The rate at which some Manchester United fans on my timeline have been furiously smashing the retweet button is obviously not without a sense of irony. It has become custom for Twitter-folk to mock Liverpool fans for their club’s consistent inability to realise their unique ambitions but this season, the traditional end-of-season banter has taken on a slightly more desperate tone. Liverpool, it seems, are a laughing-stock because the club only exceeded their fans’ more modest ambitions to a large degree rather than a wildly ridiculous one.

Liverpool went top of the Premier League with that 3-3 draw at Palace, and yet Messrs. Gerrard and Suarez were inconsolable at the final whistle because they knew that, with Manchester City a point behind with a game in hand, their chances of actually winning a first Premier League title in 24 years were hanging by a thread. City, duly, re-took top spot by demolishing Aston Villa 4-0 last Wednesday.

There wasn’t much to be positive about in the immediate aftermath at Selhurst Park. Rodgers himself conceded the title. Liverpool had choked: giving up a three-goal cushion and two huge points. Jamie Carragher, long-since retired and enjoying the wonderful touchscreens former players are given to play with at Sky’s headquarters in Isleworth, was scathing of the Reds’ defence, describing some of his former teammates as “unacceptable” and “not up to being Premier League champions”.

But who would have put Liverpool anywhere near that bracket? I certainly didn’t when I wrote that exploratory piece for Back Page Football two years ago. Never did I realistically think that Brendan Rodgers would take Liverpool to the top of the table with a game to play in his second season (nor did anyone on Merseyside). When Rodgers spoke of his three-year plan at his somewhat awkward unveiling, the assumption was that by the end of that period, Liverpool would be ready to push for a Champions League spot. How many Liverpool fans, coming into the 2013/14 season, thought Liverpool would be ready to finish fourth, let alone second or first?

Much of Liverpool’s success this season is down to the confidence the squad have in Rodgers and his vaunted fluid system (insert your own “liquid football” jokes as appropriate). That confidence has taken Liverpool to a position well beyond where their squad should realistically be aiming for.

So Carragher isn’t wrong when he says Liverpool’s defence isn’t one of Premier League champions. Martin Skrtel and Daniel Agger are often described in glowing terms by Liverpool fans I speak to but make far too many individual errors to be taken seriously as a title-winning partnership. Mamadou Sakho arrived from PSG last summer with a burgeoning reputation but has been wildly inconsistent throughout his first season in English football. Glen Johnson doesn’t flatter, merely deceives at right-back while Jon Flanagan, arguably the standout performer of Liverpool’s defence this season, is playing on the wrong side of the centre-halves.

Conceding 49 goals in a title race is damning. It’s a total almost double that of Chelsea.

Rodgers’ influence, therefore, in Liverpool’s midfield and attack cannot be overstated. The difference between the latter years under Rafa Benitez and today’s Liverpool is stark. Rodgers’ philosophy (which can consist of almost any formation) of open forward play has been a joy to watch across the season, with Suarez as the attack’s focal point, ably supported ahead and behind the ball by Daniel Sturridge, Raheem Sterling, Philipe Coutinho and Jordan Henderson.

Henderson’s running, so derided by Sir Alex Ferguson, has been much missed throughout his recent suspension while Sterling’s exploitation of the space between defence and midfield was key to Liverpool’s vital 3-2 win over Manchester City. Suarez and Sturridge have scored 52 Premier League goals between them this season, a better total than thirteen different sides have managed. It could be argued that Liverpool leave too many men forward when out of possession in the hope of launching an effective counter, but as that approach has taken Liverpool to the summit of the Premier League after a mediocre finish of 7th last season you can forgive Rodgers for wanting to stick to his attacking principles.

And what of Steven Gerrard? Brendan Rodgers may well have added an extra two or three seasons to the Liverpool captain’s career by coaching and moulding him into the holding midfielder he is today. No more bursting forward runs or late charges into the box, instead Gerrard takes the Pirlo role; hold behind the midfield three, take the ball from the defenders and find another man in space to attack. Like Tom Cleverley…only effective.

But Rodger’s finest moment as Reds’ boss, and the key to the Reds’ resurgence this season, came last summer. Luis Suarez looked destined to leave Anfield. He didn’t have the Champions League football he craved, Liverpool weren’t making significant progress and few could blame Suarez for wanting the move to a bigger club, even if the way he went about it was completely disrespectful to a club who stuck by him steadfastly during Evra-gate.

Rodgers dug his heels in and held firm. He used the media to perfection, making it clear Suarez was going nowhere. When the Uruguayan went public with his discontent in an interview with the Guardian, Rodgers ordered him to train away from the first-team until he offered an apology. Few managers would have the balls to publicly rebuke a star player in such a manner. Privately, Rodgers was telling his prized asset of his ambitions for Liverpool (though I’m sure a title challenge was never on the cards, even then) while reminding him of his responsibilities to his teammates. Suarez not only returned to the first-team fold following his biting ban, he would fire the Reds to the Premier League summit and win the PFA Player of the Year award in May.

Suarez staying felt impossible at times last summer. Rodgers proved everyone wrong and went on to do the same as soon as the ball hit the turf. The Reds may not win the league this coming weekend, but their progress under Rodgers should be evident to anyone and everyone…not least those players angling for a move to the Premier League this summer.

Rodgers needs to bolster his back line in the transfer window but now Liverpool are back in Europe’s premier competition he should find his scouting pool somewhat deeper than last season. While Diego Costa, Henrikh Mkhitaryan and Willian opted against moving to Merseyside last season, its unlikely Rodgers would fail to attract that level of talent again given Liverpool’s burgeoning reputation as a team reliant on exciting, attacking football.

Yevhen Konoplyanka could well join after the Reds failed to bring him in in January and I’m sure Rodgers won’t think twice about hijacking a potential move to Chelsea for Costa after the Willian saga last summer. Last season, Rodgers bought in Sakho, Aly Cissokho, Tiago Ilori and Kolo Toure to improve his defence but each of those signings was indicative of the market Liverpool were forced to shop in as a top-seven club. Rodgers was browsing buying from Tesco as City bought from Waitrose.

As a top-two side, with Champions League football to offer as well, Liverpool have the chance to bring in real quality this summer and keep their place in English football’s elite, regardless of what Arsenal, Manchester United, Everton, Tottenham, Chelsea or Manchester City have to say.

And that, when you look at the big picture, is why this is a season of success for Liverpool and Brendan Rodgers, title or no title. The Reds will go again next season, and no amount of “letting it slip” memes or half-arsed Vines will change that.