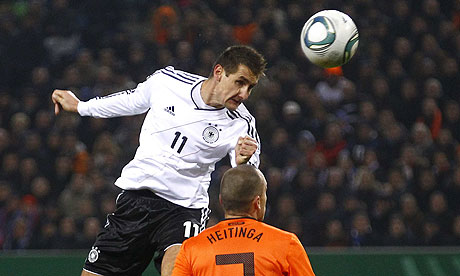 Germany and Holland go head to head tonight in a crucial Group B game with the Germans knowing a victory would all but secure them a knock-out place whilst a win for the Dutch would really kickstart their campaign after the disappointing opening match defeat to the Danes. Defeat for the Oranje, and they will find themselves needing to beat Portugal in their last game and hoping Germany beat Denmark in order to scrape through. Although drawn in the ‘group of death’, failing to make the knockout stages was almost unthinkable for a side strongly fancied, and tipped by many to go one better than their World Cup final defeat to Spain two years ago.

The Germans have that air of inevitability about them, and Gomez’s terrific header was not a surprise, it wasn’t the greatest of performances, but characterised typical German efficiency. How Holland could have done with that, they had much of the play in their opener, but just couldn’t turn their dominance in to a goal. Very much guilty at times of over doing the build up, they found themselves unable to beat a determined Danish rearguard action.

It may well come down to the battle between two of the worlds’ top marksman. Robin Van Persie was unusually wayward in the Dutch defeat, whilst Mario Gomez popped up with the all decisive German goal in their opener against Portugal.

Mario Gomez was Germany’s match winner in their opener against the Portuguese, and Joachim Low’s men will once again look to their main marksman to fire them to victory, and a place in the last eight. Determined to put his Champions League nightmare behind him, Gomez will prove a stern test for the Dutch backline who weren’t at their best in the defeat to Denmark. Quick, strong and deadly in the air, if he can outscore Robin Van Persie tonight you fancy the Germans will take the three points.

The Arsenal star was unusually profligate against the Danes, spurning chance after chance, and he’ll surely be desperate to redress the balance tonight, particularly with the thought that a defeat could well see the Dutch packing their bags for home. Wesley Sneijder was magnificent, orchestrating the Dutch play and attacks, and if he can supply Van Persie again tonight it would be a brave move to back against RVP getting up and running.

Arguably the biggest game of the tournament so far, and as such a very difficult one to call. The Dutch defence looked shaky at times during their opener, and you have to feel it will be tested to the limit tonight against Gomez, Muller, Schweinstiger, and Ozil. The Dutch simply have to get a result tonight, and will surely pour forward, orchestrated by Wesley Sneijder, hoping to catch the Germans off guard. An early goal could set up an absolute classic. An end to end game, but ultimately all square. 2-2.