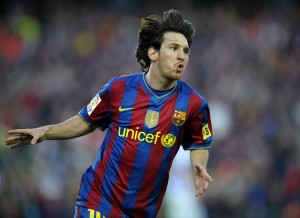 A decade ago this month, Frank Rijkaard unleashed Lionel Messi on the world. Eight minutes remained in the Catalan derby and, with his side enjoying a 1-0 lead, Rijkaard called on the services of a teenage Argentinian who had come to personify precocity within the vaunted stone walls of Barcelona’s La Masia youth academy.

Messi would not score that day at Espanyol — the years since have seen him make up for an initial seven-month barren spell at the beginning of his tenure — but the Dutchman’s decision to blood a diminutive, callow striker, only three months removed from his 17th birthday, will forever be marked as a seminal one. Barcelona’s talisman, someone who surely now sits atop a stellar list of the club’s greatest ever players, is a brace away from installing himself as the highest scoring footballer in La Liga history.

That Messi, still only 27, will break Basque legend Telmo Zarra’s 59-year-old record of 251 goals should be taken as read; to tally 250 by this stage of his career represents a remarkable achievement. Yet, in a global era, when almost any top-level contest may be watched somewhere on the planet, pored over and scrutinised by countless pundits, Messi’s dominant brilliance takes on an air of quotidian regularity. He has been so exceptional, for so many years, that the world no longer feels moved to awe in the glare of his weekly efforts. When viewed in their purest context, however, those feats defy belief.

The public must not become blasé about Messi’s singular genius, for we presently possess the privilege of witnessing it in full bloom, a stark contrast to the relatively restricted access faced by football fans in the times of Di Stéfano and Puskás, Pelé and Cruyff. Even those lacking first hand experience can only ever view Maradona through a prism defined by World Cups and fleeting coverage of Serie A.

No, for those generations living in what can truly be described as the television age, the greats are much more recognisable: Zidane, Brazil’s Ronaldo and the one from Portugal. With four Ballons d’Or to augment his myriad collective honours, and existing in a world where he is widely considered its finest player, Messi trumps them all.

He is the touchstone for any anthology tracing the metamorphosis of football into a sport of steadily increasing speed and power, one in which opponents are fitter and defenders are faster and stronger, if tightly leashed. As the game transforms into a match-up of strength and attritional athleticism, Messi’s output, and, indeed, that of the latter Ronaldo — a man with whom Messi appears to enjoy merely a persistent professional rivalry — seems all the more astounding.

Granted, La Liga is hardly a bastion of stern-faced defensive discipline but it remains in the top tier of European and, by extension, world competitions. Messi has laid waste to it thanks to his own considerable abilities and a near relentless, decade-long run of searing domestic form. He regularly carries this excellence into the cauldron of the Champions League, to the tune of three winner’s medals, 69 goals and four top scorer awards. If his international exploits — 95 caps, 44 goals, World Cup runner-up — somehow carry the whiff of frustration, then such disappointment certainly stems from his otherwise stratospheric standards.

There was a vintage omnipotence in the manner of the fairly routine midweek Champions League home victory over Ajax: a swaggering, Messi-inspired destruction, replete with the quicksilver movement and clinical, space-divining perpetual motion that constitute the hallmarks of the modern Barça. Messi created Neymar’s opening goal with a mazy run and delicate pass, before hooking up in familiar fashion with fellow conjurer Andrés Iniesta to stab in a second. An expected win, maybe, but Real Madrid, so impressive at Anfield, will have taken note in anticipation of today’s El Clasico tie at the Santiago Bernabéu.

Messi has long formed the tip of a spear raking mercilessly at Madrid’s haughty sense of self. Given his personal triumphs when facing those hated Castilian rivals, the prospect of this latest totem of Catalan defiance matching, and exceeding, the Zarra benchmark is, perhaps, the most anticipated subplot of an early-season clash. The man so often at the centre of these bouts might dismiss the importance of his personal milestone with trademark nonchalance but the significance is undeniable. To establish his own legacy in the capital would be symbolic.

Regardless of when it occurs, the Messi legend is all but set. The best there has ever been? Quite possibly.

One thought on “Lionel Messi’s imminent record should inspire awe”