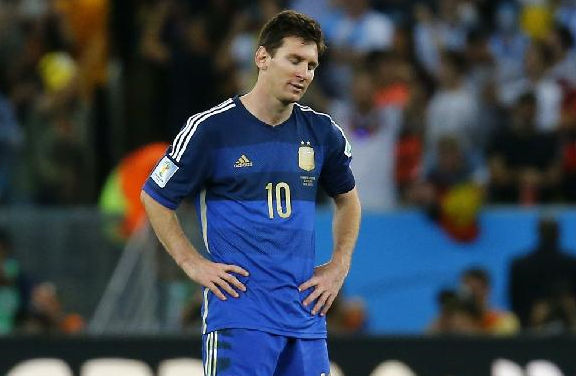 Gonzalo Higuain rolls the ball to Lionel Messi, who turns and takes three touches; edging closer to the semi-circle that protrudes his half. And then, with a slight nod forward, he plays a swooping ball right through the Belgian defence.

The moment that Messi receives the ball, the Belgian midfield confronts him, expecting him to shimmy around them. But, seeing the gap beyond the onrushing Belgians, he is able to play a characteristically brilliant pass.

Vincent Kompany, the last Belgian back, nearly intercepts, only for it to curl and slow down into the path of the onrushing Di Maria.

Messi’s influence in this 2014 World Cup quarterfinal against Belgium came from midfield, rather than in the opposition’s penalty area; a more familiar scene.

Messi has lost some of his once scorching acceleration. It is only natural considering his age, and the niggling injuries he has faced in the past two years. With the passing of his pace, comes a better appreciation of what a great footballer he is.

Only Messi has figured out how to win matches by moving less than everyone else. While the others are running just to keep up, Messi only has to walk to stay one step ahead.

This is a striking feature of his game; he spends a lot of time off the ball, walking.

Messi is not alone with this control through walking style. Andrea Pirlo has been a famed walker, and beautiful passer for years, especially with his growing age. Sitting deep, like an extra centre-back, he is free of responsibility, roaming and dictating.

Currently Messi operates as a free attacker: wandering in the opposing half, as he plays one touch passes, threads balls through or decides to turn and glide past opponents. A similar role to Pirlo’s, only he is attacking, rather than defending.

For a whole generation, the end of Messi’s career will be the first loss of a great they will witness. But, the transformation into a regista could slow down the inevitable.

Pirlo started out as a trequatista, linking play further up the field, but has since reverted to a more deep-lying regista role. Bastian Schweinsteiger is another to make the switch from an attacking role in midfield, to a more reserved one.

The Uruguayan journalist and writer, Eduardo Galeano once said:

I like Messi because he doesn’t think he’s Messi.

This down to earth and calm headed personality are evident in Messi’s demeanor and are key to being a regista, where mistakes are unforgiveable.

With the equally calm head of Xavi easing his way into retirement, a successor is needed. It might come too soon for Messi, who still possesses the ability to score goals. But as his years deepen and his pace dwindles, Barcelona will find a place for him.

In eight years time, Pirlo will be enjoying a deserved rest, almost certainly in his vineyard with a glass in his hand. He will be 43, while Messi, eight years his junior, 35.

By then, Messi may still be looking to get his hands around the World Cup, rather than the golden ball he grasped following the final. As he showed throughout the tournament, he still has much to offer in an attacking role. He looked laboured near the end, but as Sabella said in his post match press conference:

Messi played a great World Cup. He was absolutely fundamental to us getting where he did.

In upcoming World Cups Messi may be as fundamental, but will it be from deeper on the pitch?

One thought on “Should Lionel Messi switch to a regista role?”