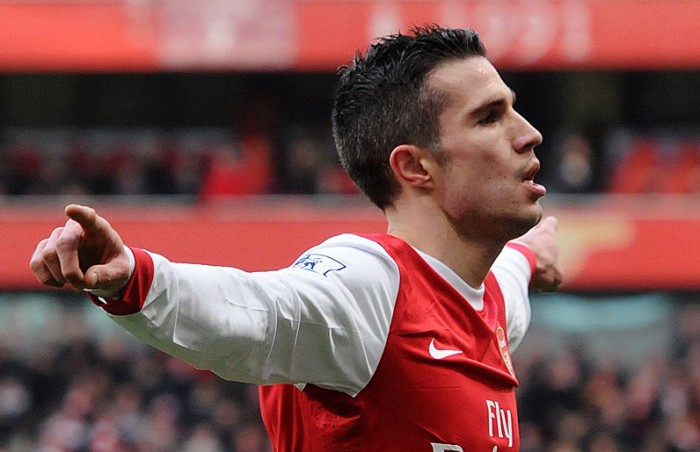 Arsenal striker Robin van Persie is in the best form of his career.

So far this season, he has bagged 11 goals in 13 goals in 16 games across all competitions including 11 goals in 12 English Premier League games. Such is the Dutchman’s phenomenal run of form over the last 12 months that many analysts are now comparing Van Persie to his contemporaries; Lionel Messi, Cristiano Ronaldo and Wayne Rooney.

But how do these favourable comparisons hold up?

Since January 1 2011, Robin van Persie has been on fire. The very fact that he was left out of the 23 players making up nominations for the 2011 Ballon d’Or is a crime against football in itself. How can players like Eric Abidal, Karim Benzema and Samuel Eto’o, amongst others, rate a nomination over a player who has scored 36 goals in just 45 games over the last calendar year?

This point is further pushed home when you realise that Robin van Persie is plying his trade for Arsenal in the Premier League which is arguably the toughest league in the league.

As a player, van Persie possesses superb technique as you would expect from any Dutch international. He has incredible awareness and vision which combined with his superior technique offer him the ability to pick out passes that other players would not even attempt. Van Persie is also deceptively quick over short distances and he has used his pace and intelligent positional play to score all but ten of his Premier League goals inside the 18-yard-box.

In recent times, Arsene Wenger has played van Persie up front as the lone striker in a 4-5-1 formation. However, while there is no doubting the Dutchman’s ability as a centre forward, many feel that his best position is just behind the striker where he would be able to marry his creative and predatory skills to better effect.

While there is no doubting his skill set, the biggest question against van Persie as a player over his Arsenal career has always his fitness, or lack of it.

A quick glance across the next two tables reveals many aspects of Robin van Persie as a player.

Total Games Played by Robin van Persie for Arsenal since 2004.

The most obvious thing that stands out is the gradual improvement in van Persie’s goals to games ratio over the last eight seasons.

At 28, the Dutchman is now at the peak of his powers, as is evident from Arsene Wenger’s recent assumption of his star. The Frenchman said: “Robin is on fire at the moment and his class means he is taking advantage of being in a team that wants to attack a lot and create chances. The intelligence of his movement and the accuracy of his finishing is exceptional.”

But when he joined from Feyenoord as a 20-year-old in 2004 he was far from the finished product. His progress is testament to Arsene Wenger’s incredible vision and faith in the player and his phenomenal coaching ability.

Van Persie’s gradual improvement since 2004 also shows that the player is extremely intelligent and that he not only works on his game, but that he also studies, analyses, and puts great thought into how his game can improve.

However, the most negative aspect against the striker’s game is his weakness against injury. His average of just 20 EPL games a season from a maximum of 38 shows a stark reality for Arsenal fans; that Robin van Persie cannot be relied upon to push their team towards the title because he body always breaks down. And that if the Dutchman is ever going to be considered as one of the best players in the world he is going to have to put as much thought into his physical preparation as he does into his mental preparation.

During the exact same period, between 2004 and 2011, Wayne Rooney has established himself as one of the best players in the world.

The ex-Everton forward joined Manchester United in 2004 and has gone on to score 158 goals in 336 games for the Red Devils over the last eight seasons.

A quick comparison shows that Rooney has played almost 100 more games and has scored 50 more goals than the Dutchman over the same intervening period.

Rooney keeping his fitness has also contributed to United winning Premier League titles in ’07, ’08, ’09, ’11 and a Champions League title in 2008 where Arsenal have won nothing since the FA Cup in 2005.

There is little doubt that Wayne Rooney is a world class talent but even he pale’s in comparison to Cristiano Ronaldo’s and Lionel Messi’s records over the last number of years.

Last week was a monumental week for both players as Ronaldo scored his 100th goal in just three seasons for Real Madrid while Messi bagged his 200th goal for Barcelona since making his debut in 2004.

A quick look at their vital stats reveals:

Rooney and Ronaldo have both played around 100 more games than van Persie even though they began their careers one year later while Messi, who started his career three seasons after van Persie made his debut, has played just 35 games less than the Dutchman.

Goals can be an unfair method at comparison as both Ronaldo and Messi play in La Liga and their respective teams, Real Madrid and Barcelona, regularly beat teams by huge scores.

A further look at van Persie’s record during his most prolific period (2009 – 2011), the same period that Cristiano Ronaldo played for Real Madrid shows that the Dutchman has an impressive record with 47 goals in 68 games.

However, once again we must compare his time on the pitch to his rivals. During the same three year period Ronaldo has scored an amazing 103 goals in just 106 games while Messi has scored an even more incredible 123 goals in 126 games. Rooney for his part has played 98 times and has hit the back of the net 61 times.

Basically the moral of the story for Robin van Persie is the exact same as it is for Arsenal’s title chances.

If van Persie ever wants to be considered as one of the best players in the world he must improve his fitness and if Arsenal ever wants to win the league then Arsene Wenger must find a way to protect and improve his star player’s physical attributes.

The elephant in the room for Wenger and for the Gunner’s many fans though is the Dutchman’s contract situation. At 28, van Persie is facing the big pay day of his career and as of yet he has nothing to show for it as far as major trophies are concerned.

With his contract up in 2013 and his being available to negotiate a free transfer away from the Gunners in little over 12 months, Wenger is in the awkward position of facing his second successive captain leave the club after Cesc Fabregas left for Barcelona during the summer.

As a player, van Persie would have no end of suitors wishing to meet his demands but his current run of form combined with his incredible technique, intelligence and skill mean that every major club from Barcelona to Real Madrid to Manchester City and United will be interested in prising Wenger’s star asset away from the club.

It is a frightening thought for Arsenal fans as they are relishing this rich vein of form.

Will it be a double edged sword?

Does Wenger improve van Persie’s fitness? Knowing that it is the one aspect that will guarantee his team a top four finish while it may also guarantee a move for his star pupil…