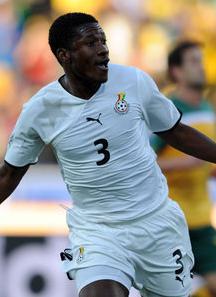 As the French national team is on its way to a painful and early trip back home, French football fans will have to find other teams to cheer for. A few familiar faces might help them doing so, as some Ligue 1 players and their team are getting closer and closer to the Second Round of the 2010 FIFA World Cup.

Looking at World Cup rosters might be the easiest (but not the most accurate) way to assess a League’s level. England remains by far the number one supplier of players for this 2010 FIFA World Cup (as 117 players are currently under contract with Premier League or lower level clubs), followed by Germany (84) and Italy (80). Surprisingly, Spain ‘only’ sent 54 players to South Africa, but this fact can be explained by the lower proportion of foreign players in Spain vs., say, England. France follows with 45 players, with as many as 41 of them playing in Ligue 1.

The French team has a real taste of Ligue 1 with 11 players, most of them being among the stars of the league, with Hugo Lloris, Jérémy Toulalan, Yoann Gourcuff or Ligue 1 winner Mathieu Valbuena. But, just like the rest of the team, they collapsed and failed to offer any quality on the pitch, except maybe for Lyon goalkeeper Lloris who, despite a shaky defense, managed to avoid an even bigger humiliation. Without a surprise, Ligue 1 is also well-represented in a majority of African teams, as 7 have been called up by Cameroon French coach Paul le Guen, and 4 are featured on Algeria’s roster. Except for France, Ligue 1 has brought more players to underdogs rather than to major teams, but Argentina’s Gabriel Heinze (Marseille) or Brazil’s Michel Bastos (Lyon), who both start at a left-back position for their country, might very well bring the trophy back home.

A few players to watch

Which Ligue 1 players should you watch in this World Cup? A few of them have already put their name close to the top of some recruiters’ watchlist, like speedy Rennes striker Gyan Asamoah, who has already scored twice (on PK) for Ghana. US captain and Gyan’s partner at Rennes Carlos Bocanegra has led a surprising US side to tie England and to stay alive after a spectacular 2-2 against Slovakia. He will face Algeria and its young and promising left-footed midfielder Ryad Boudebouz (Sochaux) in a decisive final game. Valter Birsa, who led Auxerre to the Champions’ League preliminary round this season, has impressed with Slovenia and had one of the World Cup’s most spectacular goal so far with a long-range blast against the US. His Auxerre teammate and central defender Stéphane Grichting has posted a strong performance for Switzerland as they managed to shut down Spain’s armada. Lille’s Gervinho, a fast and powerful winger with a love for dribbling, will do his best to save Ivory Coast and lead them to a goal-scoring feast as they face a rather desperate situation in Group G. Also, do not forget to keep an eye on André Ayew, Ghana’s young left midfielder. At just 20, he led surprising Ligue 2 side Arles-Avignon to Ligue 1, and has shown some interesting skills against Serbia and Australia.

Biz. student from Lyon, France. I'm a French and US soccer fan, and an Olympique Lyonnais season ticket holder. Apart from Ligue 1, I follow the EPL, la Liga and the MLS. I'm also a Houston Dynamo, Atlético Madrid and Liverpool supporter. You can also listen to my Ligue 1 analyses on France 24's sports podcast. Follow me on Twitter @E_ten