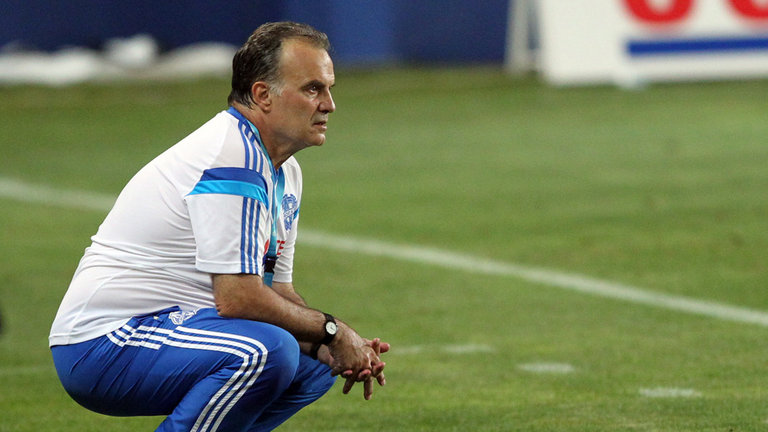 This hotly-anticipated Ligue 1 fixture saw two new high-profile managers go head-to-head in their first competitive matches of the season. Marcelo Bielsa’s Olympique de Marseille side made the hop across the Mediterranean to Corsica, where they began their Ligue 1 campaign against former OM midfielder Claude Makélélé’s SC Bastia at the Stade Armand-Cesari. This fixture did not disappoint, with six goals and two penalties giving the sellout crowd in Furiani a lot to talk about. The game finished a 3-3 draw after ninety-three thrilling minutes.

It’s no secret that Bielsa’s tactics have caused a stir wherever he has coached, but the Argentine was keen to point out in his press conference last week that he is “not a revolutionary”. Bielsa has already however had a marked effect on this Marseillais side, with the team looking incredibly more enthused and determined than the quite simpy soulless OM side that we saw last season. The new coach has based his side around his trademark 4-1-4-1 system, which relies heavily on attacking positivity within a side, backward and sideways passes have gone out the window and Bielsa’s side that took on Bastia was set-up even more attacking than usual – in a 3-3-3-1 formation – which enabled full-backs Benjamin Mendy and Brice Dja Djédjé to push up the flanks as often as possible to assist in swift attacking moves.

Marseille did impress in the attacking side of their game and gave their support many reasons to be optimistic for the coming season, scoring three times and creating more opportunities. The direct attacking nature of their game is sure to bring about goals, and it must also be noted that SC Bastia had the fifth-best home record in Ligue 1 in the 2013-2014 season, with the Corsican side only losing four times at home in France’s top-tier. However, with Lucas Mendes set to go, Bielsa may need to bring in more central defensive options to help stregthen his side’s weaknesses at the back. Nkoulou is already a proven Ligue 1 regular centre-back and Togolese international Alaixys Romao is set to return from suspension, but the inexperienced Sparagna and the out of position Jérémy Morel – who both started the match before Sparagna was replaced by Lucas Mendes – aren’t the strongest replacement options.

There was also plenty of positivity on show to enthuse the SC Bastia support, with Makélélé’s side proving to be a formidable side at what should be one of the most difficult places for Ligue 1 sides to travel to. Les Bastiais finished an impressive 10th place in France’s top tier last season, however over 70% of their points were won at the Stade Armand-Cesari and if they are to improve on last year’s performances, they must be more productive in their matches on the mainland.

Olympique Lyonnais eased to a covincing and impressive two nil home win against Stade Rennais in Hubert Fournier’s first Ligue 1 match in charge of his new side and youth was the key as the at the Stade de Gerland side were worthy victors. Les Gonnes’ starting lineup included eight players who began their careers in the Lyonnais youth academy and three more youth products came off the bench, helping to seal the club’s first three points of the season in the sweltering Rhône-Alpes heat.

Fournier’s side received encouraging news during pre-season, as star players Alexandre Lacazette and club captain Maxime Gonalons confirm their commitment to the club for at least the next season. Both are keen to help the club where they were formed as youth players progress, with Gonalons signing a two-year contract extension and Lacazette telling OL TV that he wants “to score even more goals than last season” with the Rhône-Alpes club. Clément Grenier is another key player, who despite previous speculation, looks set to help Lyon to success this year. The signing of experienced full-back Christophe Jallet from Paris Saint-Germain and bright defensive prospect Lindsay Rose from Valenciennes have also helped Fournier to strengthen what is already a very promising Lyonnais ‘effectif’.

OL’s strength has always lied in their abilitiy to maintain the continuation of their world-renowned youth set-up, which has seen the likes of Karim Benzema and Loïc Rémy developed through its framework.  Lyon do appear to be on the verge of bearing the fruits of a golden generation with youth products Lacazette, Gonalons, Grenier, Ferri, Benzia, Umtiti and goalkeeper Anthony Lopes all set to star regularly for les Gones, and it was the ever impressive Ferri who starred in their opener on 64 minutes. After great build up play, the 22-year old Ferri showed great vision to push the ball through the Rennais defence with precision and find Malbranque who finished neatly. Malbranque was a first-half entrant after coming off the bench for the injured Nabil Fekir.

One player to watch out for this season is Mohammed Yattara. Not the most well known of the graduates from OL’s youth academy, Yattara excelled on loan last season at Angers SCO in Ligue 2, scoring 15 times. The Guinea international striker is, at just 21, a very exciting prospect, who has already made a mark for Fournier’s side, scoring twice in the OL’s opening Europa League away leg against Mlada Bolesav. Yattara was involved heavily throughout his 67 minutes performance, but at times did appear as you’d expect slightly naïve when trying to link-up with the darling of the Stade de Gerland, Alexandre Lacazette. He was eventually replaced by Cameroon-born striker Clinton N’Jie, who has broken through into the OL’s first-team setup from the club’s amateur squad. N’Jie was clumsily brought down in the box by M’Bengué , leaving the referee Benoit Millot with an easy decision to make. Lacazette then slotted the spot kick convincingly, opening his goalscoring account for this year’s Ligue 1 campaign and securing the three points for his side.

Another positive for Lyon was the introduction of yet another Lyonnais youth product to the game, 19-year old attacking-midfielder Farès Bahlouli, who impressed with quick feet, trickery and well executed crossballs after coming on for Mveumba on 84 minutes.

For Rennes on the other hand, supporters will be discouraged by their side’s apparent lack of width, creativity and direction. Philippe Montanier’s decision to play deep and without a recognised striker ultimately lead to his side’s lack of an ability to respond to Lyon’s goals, with les Rennais managing to put just one shot on target. Fans of the Breton club may claim that the penalty they really should have been given in first-half may have changed the game, but it looks like it could be a long season for the Rennais support.

Saint-Étienne impress with victory in Guingamp

Saint-Étienne, despite being far from a title challenging side, had many positives to take from last season. The club finished fourth last season, 8 points ahead of their bitter Lyonnais rivals. The Stade Geoffroy-Guichard, or as it is affectionately and somewhat dauntingly referred to by the resident support ‘Le Chaudron’ (the cauldron), was one of the hardest places for away teams to score points last season. Christophe Galtier’s side dropped just 16 points out of a total 57 at home last season, with LOSC and Monaco both losing and PSG and Marseille only managing draws. Les Stéphanois must however improve their away form if they are to better last season’s performance. Galtier’s side dropped 29 points on the road last season, incurring more defeats and draws than victories.

With this in mind, Saint-Étienne have started this year’s Ligue 1 campaign on a perfect note, with a competent victory in Brittany against Guingamp. A Melvut Erding double ensured that Galtier’s squad would take three points back to Rhône-Alpes from the Stade de Roudourou. Typical resolute Stéphanois defending, combined with another excellent performance from France international goalkeeper Stéphane Ruffier, rewarded the side with an extremely well deserved cleansheet. Erding scored from the spot in the first-half and then doubled his tally with a well guided finish on the counter-attack in the second period.

Kurt Zouma’s departure to Chelsea will have come as something as a blow for ASSE, however Moustapha Sall demonstrated the fact that he is a more than capable replacement. Galtier has also managed to bolster his squad’s attacking options as Ricky Van Wolfswinkel has signed on loan from Norwich City and former France U19 international Kévin Monnet-Paquet  has moved to the club from Lorient. The club’s sporting co-ordinator Dominique Rocheteau spoke to RMC last week about the Van Wolfswinkel signing, claiming that the Dutch striker “didn’t adapt well to Norwich’s style” but that he is of “a great standard”. It will be interesting to see if the Dutchman can rediscover the form he showed whilst at Sporting Lisbon and Utrecht.

Champagne on ice as PSG slip up in Reims 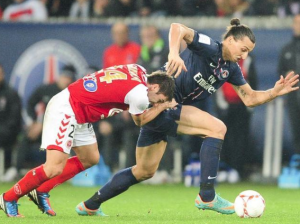 For some Ligue 1 supporters, the foreign media’s persistent focus on the fortunes of Paris Saint-Germain can be somewhat of an annoyance, however there is no denying the fact that the Qatari-backed club have, in recent times, brought an element of much needed glamour to a league that has often been overlooked. It was perhaps then apt that les Parisiens opened the 77th edition of France’s topflight championship, with one of football’s most extravagant club’s travelling east from the capital to the Champagne-Ardenne region to face Stade Reims at the Stade Auguste-Delaune.

In what was a thoroughly entertaining match, PSG started brightly, with last year’s Ligue 1 top scorer Zlatan Ibrahimovic meeting a perfectly weighted Pastore through ball to open the scoring with a tidy finish. Things however then took the most uncharacteristic turn for the Swede, as he then missed the open goal from close range, striking the post when it was probably easier to score. Things didn’t improve for the centre-forward when he missed a penalty two minutes later, with Rémois goalkeeper Placide making a diving save. Reims then exposed PSG’s apparent weakness at the back to score twice and take the lead before half-time.

‘Ibra’ then scored on 63 minutes with a cross come short that caught Placide off-guard. The result was by no means a disaster for Laurent Blanc’s side, and over the course of the match, a draw was probably a just outcome for both sides. Les Rémois impressed with their resolve and commitment, pleasing the sellout home crowd. There is room for improvement for PSG, and on last Friday’s showing, games between PSG and the Ligue 1’s top sides could be much closer this season.

Mathieu Duhamel was quite simply superb last season in SM Caen’s successful push for promotion and the well travelled centre-forward continued his goalscoring form in his side’s return to the topflight. The Norman side impressed with a relatively straightforward three-nil away victory against Evian Thonon Gaillard in Savoy, with Duhamel netting twice. Duhamel scored twenty-four times last season in Ligue 2 and the centre-forward opened his account for this season with an instinctive finish on 32 minutes. The 30-year old then showed his class when he converted a header on 32 minute with the most deft of touches, doubling his tally. The former FC Metz striker is definitely a player to watch this season in Ligue 1.

It also looks like it will take a lot of improvement for this current Evian TG side to remain in France’s top tier, as they were quite simply outclassed by the Ligue 1 new boys in what was perhaps the worst team performance of any side in the league in its opening weekend.

I'm a massive French football enthusiast, having fallen in love with all aspects and levels of the sport in France whilst working for a year in the town of Niort. As a French studies student, I'm constantly following what's going on in the French football media and bringing stories to the English-speaking world.