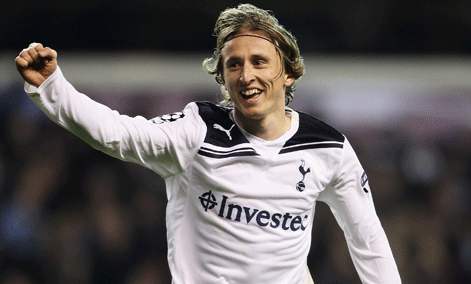 Daniel Levy was described by former Tottenham chairman and star of The Apprentice Alan Sugar, as the toughest negotiator he has ever dealt with, after ENIC Group, an investment company chaired by Levy, took over the club in 2001. However, it is vital that Levy eschews from entering negotiations with any club regarding Luka Modric after categorically stating the player is not for sale, at any price.

Modric has been the subject of intense speculation this summer, with no less than three major Premier League clubs reportedly chasing the Croatian playmaker’s signature. Chelsea’s bid of £22 million, made last month, was instantly rejected by the North London club and manager Harry Redknapp described the offer as ‘ridiculous’ and ‘farcical’ claiming that “there are people being sold for £20 million who are not fit to lace Luka’s boots.”

Subsequently, Levy released a statement declaring that the club had absolutely no intention of parting company with their prized asset, regardless of the fee. “In respect of Luka Modric, we are not prepared to sell, at any price, to Chelsea Football Club or any other club. We made our stance on this issue abundantly clear in writing to Chelsea. They chose to ignore it and then subsequently made the offer public.

“For the avoidance of any doubt, let me reiterate that we shall not enter into any negotiations whatsoever, with any club, regarding Luka. We now consider this matter closed.”

After seeing their initial bid rejected, Chelsea returned with an improved offer of £27 million. Again the offer was rebuffed as Levy continued to stand firm.

Having made his stance imposingly perspicuous, Levy has afforded himself no room for maneuver. Failure to maintain his definitive and uncompromising posture could have a damning effect on the club, at the same time jeopardising his relationship with the supporters, players and even the manager.

To sell Modric, now, would not only represent the loss of a quality player, but could potentially reverse the rapid progress made by the club in the past two seasons. Redknapp has repeatedly reiterated his desire to further strengthen the squad over the summer in an attempt to close the gap on the ‘new big four’. A squad sans Modric would, without apprehension, be  a weaker one.

Having received emphatic assurances from the board room, Redknapp would undoubtedly question Levy’s ambition to take the club forward if Modric’s departure were to be sanctioned, adding superfluous pressure on an otherwise suitably practicable relationship. Respect and trust, like Modric, decamped.

Selling Modric would demonstrate Spurs’ inability to break into the exclusive group of ‘big’ clubs, and suggests the club’s recent success has been nothing more than over-achievement. If the club are to continually dine with the elite they must eradicate the sale of their stars to the top clubs. In the past Michael Carrick, and more recently Dimitar Berbatov have departed North London in search of titles, glory, and a bigger payday. Tottenham must banish the idea that they are a selling club.

And what of the other top quality players. If Modric were to leave, it would be tough to convince the likes of Gareth Bale and Rafael van der Vaart that their ambitions can be met by the club. How long before they would seek their exits in search of trophies. The sale of Modric has the potential to send Tottenham back to the mediocrity of the mid-table position they have occupied for much of the modern era.

In the coming weeks Levy’s resolve will indubitably be tested again as Chelsea and both Manchester clubs monitor the situation. However, it is imperative the club stand firm and block any advances made, as promised by the chairman.

It was widely reported, last week, that Modric has handed in a written transfer request after admitting his desire to move to accross London and join Chelsea. Ultimately though, the decision rests with Levy. There is no pressure to sell the wantaway midfielder. The club is in a healthy position financially and the player has five years remaining on his contract.